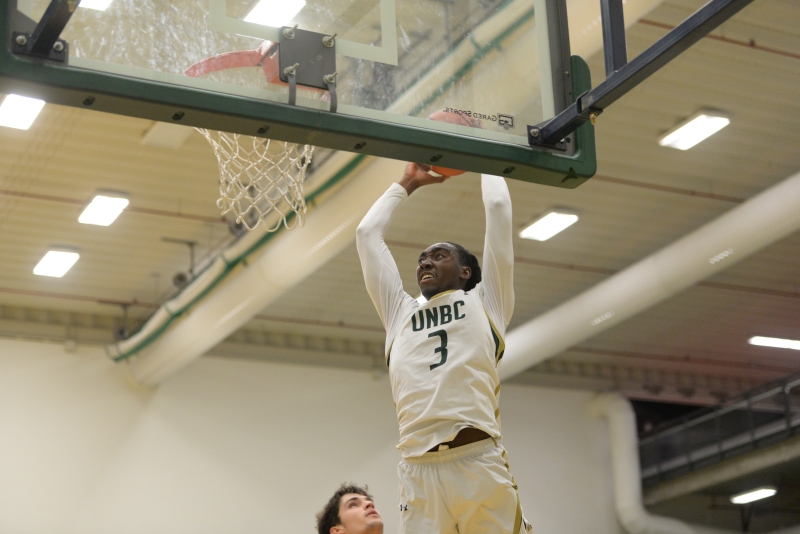 Even against the powerhouse programs of the Canada West conference, the UNBC Men’s Basketball team refuses to back down. Today, the gritty TWolves dominated the glass and beat the Calgary Dinos 95-92 in an overtime classic on Friday, November 25th, 2022 in Prince George, BC.

The two teams came out trading possession of the lead and the momentum early in the first quarter, until back-to-back three-pointers by Micah Jessie gave the Timberwolves a 16-10 advantage with two minutes remaining. Matei Vucenovic answered late in the frame with a tough bucket inside, but the TWolves held a 17-15 lead after ten minutes.

The second quarter belong to the Timberwolves. After an Aidan Smith put the Dinos up 19-17, UNBC went on a 17-2 run, fueled by treys from Fareed Shittu, Jessie, Darren Hunter, and Jackson Netzel. Calgary chipped into the deficit on a pair of layups by guard Ezeoah Santiago, but Shittu and Evgeny Baukin made late three-pointers to give the TWolves a 44-32 at halftime.

Coach Dan Vanhooren’s halftime speech must have resonated with his Dinos players, because Calgary came out intentional in the third quarter. Noah Wharton scored four early points, Smith made a fastbreak layup, and a Javier Ramos-Yquierdo jumper cut the UNBC lead to 47-46 midway through the stanza.

The two teams traded control much of the third, until UNBC seized a moderate five-point lead late in the frame on a Jessie triple and some strong play from reserve guard Justin Sunga. The Timberwolves held a 62-57 lead with ten minutes to play, but had their hands full holding off a dangerous Dinos program.

UNBC captain Chris Ross was a man possessed in the fourth, grabbing offensive rebounds and getting tough putbacks, despite being undersized to be making an impact under the hoop. However, Aidan Smith wasn’t going to let Calgary go quietly in front of a raucous Northern Sport Centre crowd. The six-foot-six guard teamed with Wharton to score ten consecutive points and seize control of a 77-72 lead with less than four minutes remaining.

A Shittu three cut the lead to two, leading to dramatics in the final minute. After a missed jumper, UNBC big man Spencer Ledoux corralled the offensive rebound and got the tough putback to go, tying the score at 81-81 and sending the game to overtime.

The extra frame was fireworks as the teams traded three-pointers; first Smith for the Dinos, then Sunga for the Timberwolves, then Shittu for the TWolves, answered by Santiago for the Dinos. After Ledoux found Shittu for a dunk, the TWolves were able to do enough defensively to thwart Calgary’s best efforts, icing the game with free throws and beating the Dinos 95-92.

Jessie was UNBC’s leading scorer, going for 24 points, eight assists, and seven rebounds. Hunter had 19 points, Shittu was tremendous with 15 points, 11 rebounds, seven assists, and three blocks, while Chris Ross had a career-high 18 rebounds to go along with 12 points. Ledoux also reached double figures with 10 points.

For Calgary, it was Smith leading the way with 27 points and nine rebounds. Santiago scored 21 points, while Wharton had 17 points. Ramos-Yzquierdo reached double figures with 11 points and eight boards.

With the win, UNBC improves to 4-3, while the Dinos fall to 4-3. The two teams will finish off their two game series Saturday evening at the Northern Sport Centre in Prince George.