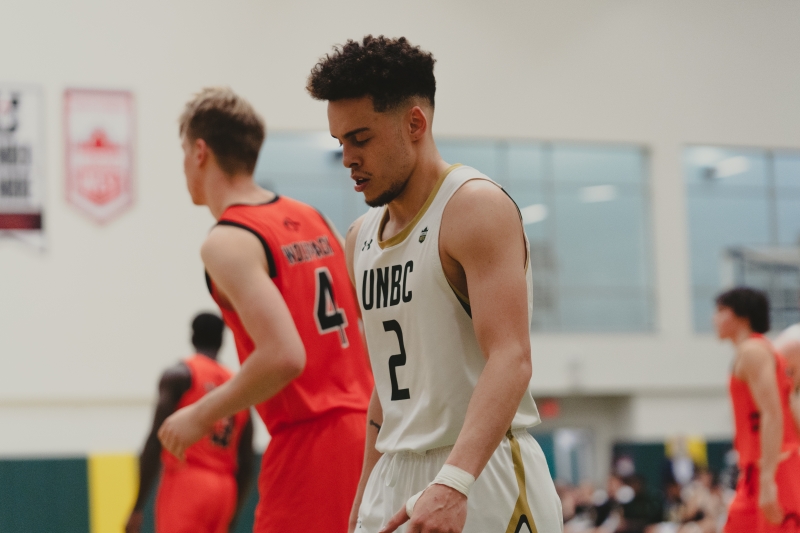 It was one of those nights for the UNBC Timberwolves. The TWolves couldn’t find a way to score the basketball, falling 83-49 to the UVic Vikes on Friday, December 3rd in Victoria, B.C.

Fueled by a loud and raucous student section, the Vikes came out firing in the first quarter. Aaron Tesfagiorgis got Victoria going with six early points, and a Diego Maffia trey stretched the early advantage to 13-5. UNBC dug in, responding with a three from Rohtash Mattu and a nice inside finish from Spencer Ledoux to draw closer late in the frame. However, a late flurry sparked by Trent Monkman had Victoria up 26-15 after ten minutes, due to 58% shooting from the field in the quarter.

In the second stanza, a lid formed over the offensive basket for the Timberwolves. While Matthew Ellis got tough floaters and jumpers to go at the other end, UNBC struggled to get their looks to drop. An initial 18-4 run for the Vikes stretched their advantage to 23 points halfway through the quarter, and the nightmare half came to an end with Victoria leading 51-28.

After 20 minutes, Laing led UNBC with eight points, two rebounds, and two assists. Payton Tirrell added five points and four boards off the bench. Nine Vikes scored in the half, paced by Ellis and Maffia, each with ten points.

The early parts of the third quarter proved to present many of the same issues for UNBC, as they struggled to hit open look after open look. The positive for Todd Jordan’s program was the increased intensity on the defensive end, as the TWolves forced the Vikes into taking tough jumpers. However, the visitors were unable to claw into the substantial lead created by Victoria in the opening half. Late in the frame, Vova Pluzhnikov sparked a minor run, making a three-pointer and finding Rohtash Mattu for a baseline jumper, but it was 65-43 in favour of UVic after thirty minutes.

In the fourth, with the result all but decided, UNBC tried to find elements of the game that they could take into Saturday’s rematch. The TWolves’ defensive effort in the second half was much improved, but the final quarter solved very little at the offensive end. UNBC failed to score in the first 4:37 of the half, as the Vikes extended their lead to the delight of the Victoria crowd. When the merciful final buzzer sounded, it was an 83-49 victory for UVic.

Laing was the offensive leader with 13 points, to go along with three assists. Mattu added 10 points and four rebounds.