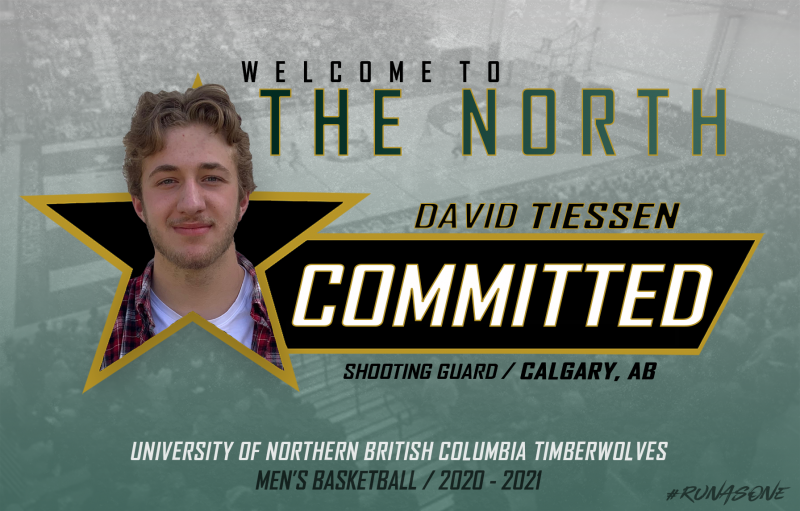 The University of Northern British Columbia Men’s Basketball team has added a dose of versatility and athletic potential, officially announcing the commitment of shooting guard David Tiessen for the 2020-2021 Canada West season.

“I am super excited to be a part of UNBC. It is the highest level you can play in Canada, and I am looking forward to becoming a better player and training with the best players around me. U SPORTS basketball has been a goal of mine since Grade 10, and I really pushed myself. I believed I could make it, if I put in the hours and the work.”

Standing six-foot-four, the Calgary product has the length and size combined with the speed and range to develop into a tough matchup at the U SPORTS level. Tiessen said a number of conversations with UNBC coach Todd Jordan were crucial in his decision to commit to the TWolves.

“I chose UNBC because they have a great program for basketball, and for school. They have a great campus, and the team is quite successful already. I like way Coach Todd (Jordan) seems, and I have heard great things. Because of the COVID-19 situation, I haven’t been able to visit, but talking to Coach Todd, he made it very clear, and I believe UNBC is the best fit.”

A product of the Calgary Basketball Academy where he trained with coach Tyler McVicar, Tiessen possesses smooth athleticism and a willingness to shoot from the outside or drive to the lane. At 17-years-old, he is confident his work ethic will allow his game to translate well to the Canada West level.

“I am a solid player all-around. I have a good shot and I am able to move the ball. I work hard on both sides of the floor. I expect next year to be very competitive and push me as a player, but I hope I am able to develop into a better all-around athlete as the season continues.”

Jordan’s Timberwolves will look to have an intense training and practice approach this season, as they eye the conference playoffs. Adding a young player like Tiessen, who is a two-time recipient of Centennial High Schools Athlete of the Year, is a move the coach likes for the upcoming season, and future years.

“David is a big guard who can shoot the ball and is a good athlete. I am looking forward to helping him develop as he starts his college basketball journey”

Tiessen is set to graduate from Centennial in June, and plans to student commerce and marketing at UNBC. He is ready to get on the court and join his new TWolf teammates in the game he has been playing since he was in elementary school.

“I love basketball because I am able to compete with others around me, and have a sense of community with my teammates. I am able to push myself to become a better athlete and player.”