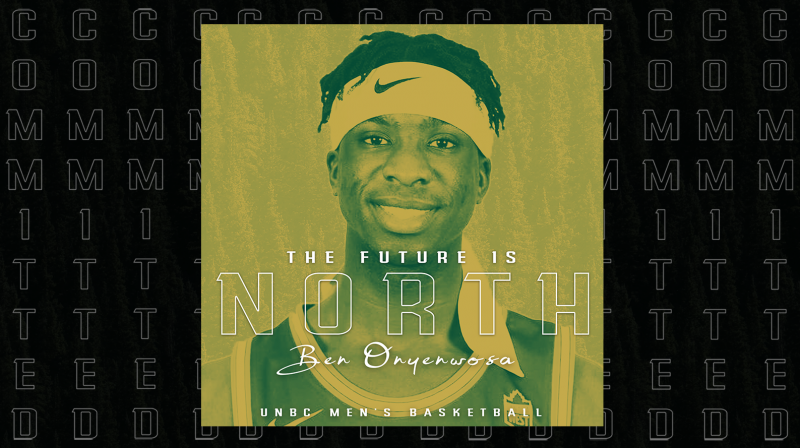 The University of Northern British Columbia Men’s Basketball team has added a major dose of athleticism and skill, officially announcing the transfer of Ben Onyenwosa from the University of Alberta for the 2021-2022 Canada West season and beyond.

“I feel excited to come back to Prince George and meet all the players. It is a real honour to play U SPORTS.”

When Onyenwosa references returning to Northern BC, he means it as a homecoming. The six-foot-five super-athlete grew up in Prince George, before moving to Calgary in Grade 8. During his youth in PG, he attended many a basketball camp at the Northern Sport Centre, led by UNBC coach Todd Jordan. That relationship and trust played a major factor in his decision to join the TWolves.

“I chose UNBC mostly because of the coaches. I have known them since I was in grade five or grade six, because of the Junior Timberwolves program. I played there lots. I feel like I will do best at UNBC because I most comfortable with them.”

Onyenwosa played his high school basketball with St. Gabriel the Archangel School in Chestermere, Alberta for coach Rob Hing. He starred for the Guardians in his grade 12 season, averaging 35 points, 11 rebounds, five assists, two steals, and two blocks per game.

With the skillset to play at the guard and forward position, Onyenwosa moves comfortably off the ball, or with the ball in his hands. One glance at his highlight tape and it is easy to see the 18-year-old’s ability to play above the rim. He hopes his game adds a new element to the UNBC program, and he expects the level of training to be intense and competitive.

Todd Jordan has known Onyenwosa since his newest recruit was just a boy, learning the basics of the game at the Junior Timberwolves program. When Onyenwosa committed to play varsity basketball at the University of Alberta, Jordan knew the Golden Bears had added a player with tremendous potential and upside. When the swingman became available this summer, Jordan jumped at the opportunity to bolster the future of the program.

“We are very excited to add Ben to our roster. Clearly, he is an explosive athlete that will add an exciting dynamic to our perimeter play.  We are thrilled to welcome him back to Northern BC and to continue the relationship we had with him as a younger athlete in our youth programs. Additionally, he is also a very good student that exemplifies what we want in a student-athlete. This is a good day for the Timberwolves.”

An honour roll student, including graduating with distinction in Grade 12, he intends to study biochemistry at UNBC. Onyenwosa will join his new teammates for training camp in August to prepare for competition at the highest level of university sport in the country.

“Playing at U of A last year helped me grow a lot as a player and as a person. It showed me the jump from high school to U SPORTS is a big jump. It’s no joke. Just have to get serious every time and lock in.”