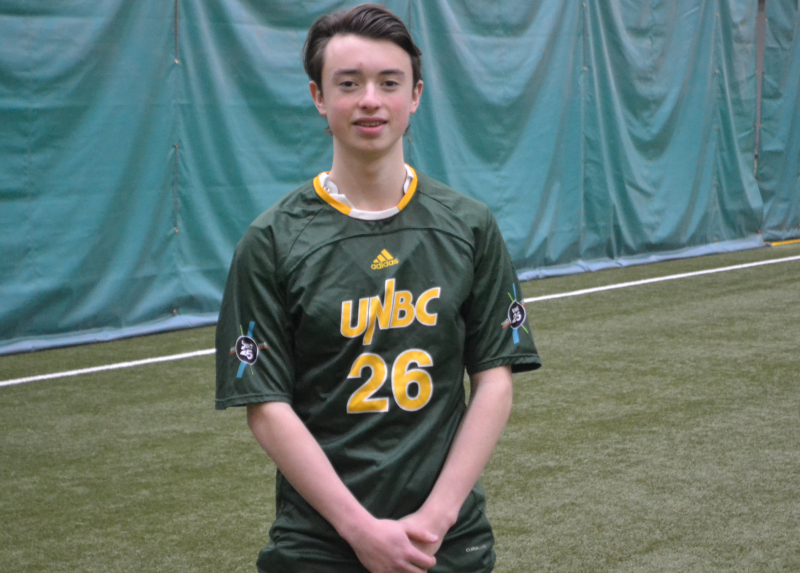 PRINCE GEORGE, B.C. – Owen Stewart is staying home to take his next step in soccer.

The standout midfielder has committed to the Timberwolves for the 2016-17 season, the first member of Steve Simonson’s inaugural recruiting class.

Stewart, who will take Business Administration at UNBC, said Simonson’s arrival at UNBC was a big part of him making the commitment.

“I knew what he did in Victoria, and what he’s done with his coaching,” Stewart said of Simonson. “It was one of those things where, seeing him come to my hometown and coach university here, it was pretty huge to play under him, and it was something I wanted to do.”

Simonson is pleased to officially have Stewart in the fold.

“Owen is a talented and passionate young player,” Simonson said. “He clearly loves the game and has a really great mindset towards his performances.

“He is exactly the type of young player that I want in this program.”

The Duchess Park product has an impressive resume, most recently being named most valuable player as the Condors captured their second consecutive North Central Zone AA championship.

There’s also a family element, as Stewart will suit up alongside his older brother Liam, who joined the Timberwolves last season after spending parts of two seasons with the University of Washington.

“It’d be amazing,” Stewart said about the possibility of playing with Liam. “Throughout youth, we never got the chance to play together, but to be at the next level and have my brother on the team is pretty cool.”

Simonson considers Stewart to be a strong player without considering where he comes from.

“The fact that he is a local player is a bonus as it shows that we can look in our own backyard for players to help take this program forward,” he said. “We want to have a connection to our region, and players like Owen and the other local players will be an important part of this.”

Stewart played most of his club soccer in the Prince George Youth Soccer Association, though he did spend last season playing with the Calgary Foothills Soccer Club, the same program where Timberwolves co-captain Tofa Fakunle developed.

“I’m so glad I did it,” Stewart said of his season away. “I love Prince George, but it’s one of those things where, as far as getting better at soccer and getting to a university level, I think it’s something you do need to experience, which I did in Calgary.

“I got so much exposure there and got better, and then I was able to come back here and really appreciate Prince George after being away.”

Now that he’s home, Stewart is ready to get started with the Timberwolves.

“It’s an amazing feeling to be able to play CIS, top-level university sports, and to be able to be in my hometown with family all around me,” he said. “It makes me want to succeed even more being home since you get that excitement from everyone around you.”