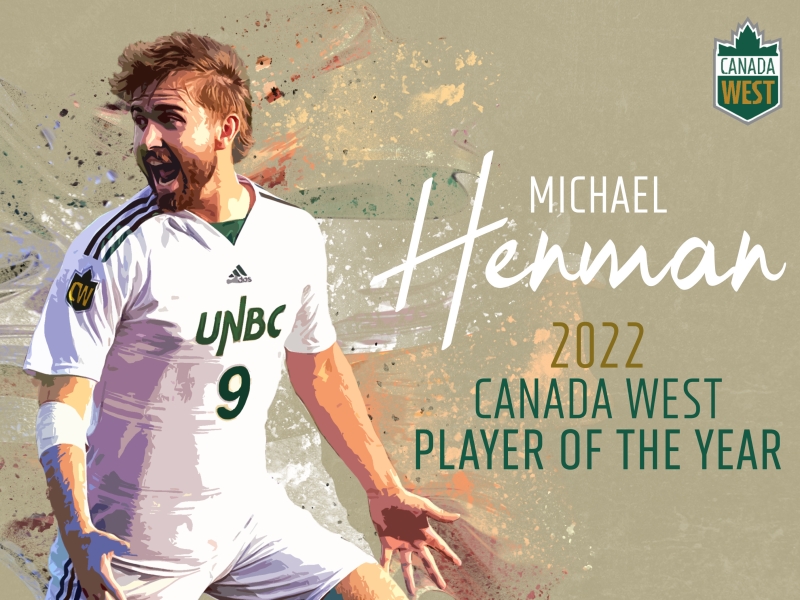 For the first time in University of Northern British Columbia history, the Canada West Player of the Year Award is making its way to Prince George.

Michael Henman has been named the 2022 Canada West Men's Soccer Player of the Year after a phenomenal season with the UNBC Timberwolves.

PLAYER OF THE YEAR: Michael Henman
​Team: UNBC Timberwolves
​Year: Fourth
​Position: Striker
​Hometown: Victoria, BC
​Program: Business
Henman not only shined individually, but helped elevate his program's status across the conference.
The fourth-year striker from Victoria, BC put up an incredible 19 goals this year, matching the Canada West record for most in a single season. Henman also had a knack for coming through in the big moments, posting five game-winning goals, good for fourth-most in a CW season.
His record-breaking season didn't stop there. Henman put up a history-making four hat tricks this season, while setting all-time institution marks for goals and points. The skillful striker was able to outsmart and outpace his opponents regularly, notching 18 of his 19 goals in play with just one scored on a penalty kick.
Henman stood out against his peers at the national level as well, leading the country in goals and points (21).
“I am so proud of all that Michael has accomplished. Not just this year, but every year since finding his way to UNBC. He is an exceptional young man, and for him to accomplish what he did this season is absolutely remarkable. I have long believed that Michael was capable of special things. He is incredibly talented. To see it all come together for him this season was tremendous. This award is representative of a great team effort, and a lifetime of work to put himself in this spot. Today is a proud day.”
​-Steve Simonson, Head Coach of the UNBC Timberwolves