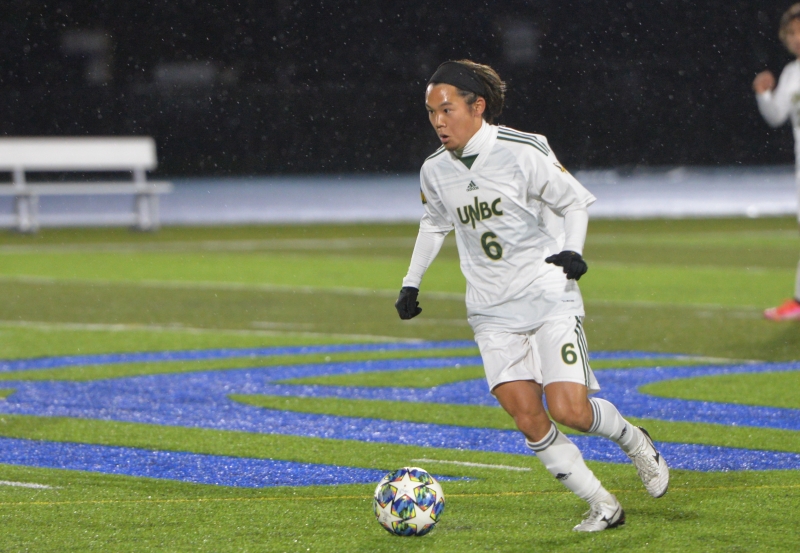 It had the feel of a playoff game. Heavy rain, plenty of chances, and a result that came down to the final minute. A Kensho Ando penalty kick in added time was enough to cause a 1-1 draw between the UNBC Timberwolves and the Trinity Western Spartans on September 17, 2021 in Prince George.

Both teams came in to the match looking for their first victory of the Canada West season, after opening weekends that saw them leave points on the board.

With conditions cold, wet, and soppy, both sides came out testing the other team’s backline and ability to play the ball in the air. Chances were mild until the 20th minute when Owen Stewart sent Michael Henman in on a run. The big forward hit the post behind TWU keeper Sebastian Colyn, but it bounced off the bar, off Colyn’s head, and out of play.

Trinity responded, and controlled much of the possession for the next fifteen minutes. It led to chances for Gordon Grice and Eh Hser Moo, but neither could beat UNBC’s Daniel Zadravec.

UNBC’s Kensho Ando was a pain in the side of the Spartans, winning balls and creating opportunities for his teammates, while TWU’s Christian Rossi and Tristan Torresan were threatening for the visitors.

Late in the frame, the Spartans believed they scored when a ball squirted into the box, off the foot of a Soren Di Sabatino flick. A TWU forward applied pressure and UNBC defender Luke Brbot went down, propelling the ball into his own net past Zadravec. However, the officials converged and decided Brbot had been pushed from behind, negating the goal.

“That didn’t feel good. But we come back tomorrow and look to bounce back and get three points,” said Trinity’s Banovic. “We need to finish more chances. I thought we were dominating in the final third of the pitch, and if we score one or two more, that is three points.”

In the second half, business picked up. Henman caused some trouble for the Spartans defenders, but Colyn was up to the task, turning away a pair of shots. From there, the Vikes had the quantity advantage, while the higher-quality chances belonged to the home Timberwolves.

With the game still scoreless in the 84th minute, Trinity scored what looked to be the backbreaker in a true war of attrition. Luca Alberti secured the ball on a bouncing play and placed it in the top left corner, out of Zadravec’s reach.

The TWolves would not back down, however. With late substitutes Dom Parris and Stu Rowlands leading the way, UNBC applied pressure, with the two connecting in a late play that forced Trinity to haul down Parris in the box.

Ando stepped to the spot and made no mistake, beating Colyn, and thrilling the Prince George supporters.

Just a minute after Ando’s first of the year, the referee blew the final whistle, ending the game in a 1-1 draw.

“It was tough. We went down with two or three minutes left, but the team dug deep,” said Parris. “We were able to salvage a point. I thought we played well, overall. We will come tomorrow and look for three points.”

“I thought we dominated possession. I thought we played well, but we just need to finish a few more chances” said TRU’s Mario Banovic. “The boys did well. We got a goal disallowed, and that happened last game too. It happens, it’s the game. Unfortunately, that penalty in the last minute of the game.”