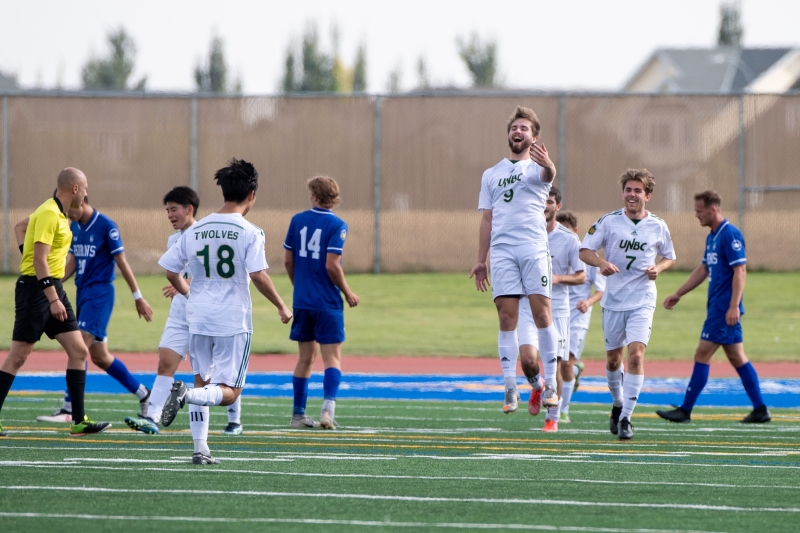 The return of sublime striker Michael Henman was the spark the UNBC Timberwolves Men’s Soccer team was looking for, as the TWolves used yet another hat trick from their fourth-year to top the Lethbridge Pronghorns 5-0 on Sunday, September 18th, 2022 in Lethbridge, Alberta.

In the fourth minute, it was the Timberwolves nearly getting on the board. Michael Henman stole the ball, beat a defender and played it into the box, finding a surging Tora Omori. The Tokyo product got a good piece of it, beating Pronghorns keeper Tegan Romaine, but not the post, as the ball bounced away.

Six minutes later, UNBC got the opener they were looking for. Off a broken play in the box, Anthony Preston won a ball, turned, and found Henman backdoor for a tap-in behind a helpless Romaine. The goal was Henman’s ninth of the season, good for first in Canada West and U SPORTS.

The Timberwolves continued to control play, possessing the ball and proving to be the more threatening side in the early going. Off a free kick, Preston found Hagon Kim but his attempt went off the crossbar and somehow stayed out, keeping it a one-goal game.

In the 40th minute, Loic Benquet put on a dribbling clinic, winding his way through the Lethbridge defense. When the Cestas, France product’s shot was deflected upwards, Henman was there to deposit it with the header, doubling the UNBC advantage.

If it wasn’t for some timely defending and sheer luck, the Timberwolves would have built an even more substantial lead, but the visitors found themselves up just 2-0 after 45 minutes. This, despite outshooting the Horns 12-2 in the half.

In the second half, UNBC kept coming. This time it was Anthony Preston getting on the sheet, beating Romaine for his first of the season, to go along with his three assists on the 2022 campaign.

The Pronghorns would do well to look for an answer, pressing the UNBC backline and earning some possession in the UNBC third. However, in the 75th minute, some history for Michael Henman. Taking a through ball from Abou Cisse, Henman beat Romaine for his third of the game and his 11th of the season. The goal was the 17th of his UNBC career, breaking Francesco Bartolillo’s program record for goals scored. Bartolillo set the mark in 69 games played, while Henman broke it in 41 games.

Connor Lewis would tack on a goal in added time, converting a PK after a handball in the box, scoring his first of the Canada West season.

When the final whistle sounded, UNBC had secured a 5-0 victory, outshooting the Horns 23-8 over the course of the match.