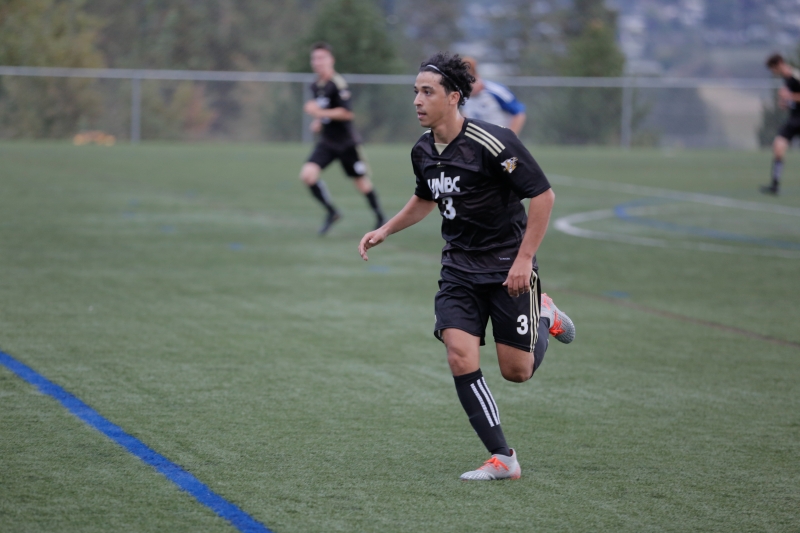 The UNBC Timberwolves believed they deserved better one night prior, despite losing a 2-1 game to the Victoria Vikes to open the Canada West season. One evening later, the TWolves came out fast and furious, but had to settle for a 2-2 draw on Saturday, September 11th in Victoria.

In the early going, it was the Timberwolves who were the more deliberate, aggressive side. After a number of mild chances, UNBC found that playing through Hussein Behery on the wing was providing a number of strong opportunities. Their persistence paid off in the 17th minute when Behery snaked his way into the box before being hauled down, earning a penalty kick.

TWolves captain Cody Gysbers stepped to the spot and made no mistake, beating Vikes keeper Harjot Nijjar to open the scoring. Gysbers missed the 2019 season with injury, meaning it had been more than 1000 days since he last suited up in a UNBC jersey. To add to the moment, he is born and raised in Victoria, and was playing in front of friends and family.

“Many of us have never played with Cody before, but we were always hearing how he is good he is. Now we see the leader he is, and the player that he is,” said UNBC’s Hussein Behery. “I am sure he is buzzing after scoring in his hometown. I am so happy for him.”

Five minutes later, more from UNBC as Anthony Preston found a streaking Behery on the left side. The Egyptian speedster put it on the foot of Abou Cisse in close, but a Vikes defender came sliding across to deflect Cisse’s shot narrowly over the bar, keeping it a one goal game.

For the rest of the half, UNBC continued to control possession and create the better chances. Until, of course, Behery put another stamp on the game. Kensho Ando weaved his way through the midfield, finding Cisse, who tapped it though to Behery who calmly beat Nijjar, making it 2-0 heading into halftime.

“That first half, we showed what we were capable of. That goal meant a lot to me, to be honest.” Said Behery, postgame. “I consider myself an island boy, in a way. It is where I spent my first few years in Canada, so it was great. I hope it’s the first of many this year.”

In the second half, the action was relatively muted until a Vikes substitution, bringing Harrison Ritter West into the game. Utilizing increased high pressure, the sub scored twice in seven minutes, shocking the Timberwolves and knotting the game at 2-2 by the 63rd minute.

“They showed a ton of character, so props to them. They pressed us very high. We knew they were going to, but they really could see it was working,” said Behery. “It is a learning curve for us. If anything, we are happy it happened early in the season. We know other teams are going to do the same to us, so we hope we can learn from it, and use this moving forward.”

In the 78th minute, UNBC nearly got the go-ahead goal they were seeking. Anthony Preston corralled a ball and sent it through the air to Stu Rowlands who headed it on goal. Nijjar was up to the task, diving to his left and making the save.

Off a Vikes corner in the 89th minute, Victoria nearly completed the comeback. Evan Libke found the ball and headed it short-side off the post, but it stayed out, much to the relief of those in UNBC white and green.

When the referee’s whistle sounded to conclude the game, both teams had to settle for a 2-2 draw.

“We play every game to win, right until the last minute. We aren’t happy with that result tonight. But we need to keep our heads up and look at what is next,” said Behery, following the draw. “We know there won’t be any weekend that will be easy. We want six-point weekends. When we lose points, we aren’t happy.”

The tie moved the Vikes record to 1-0-1, while the TWolves now sit at 0-1-1. UNBC will head home and get set to host the Trinity Western Spartans next weekend.