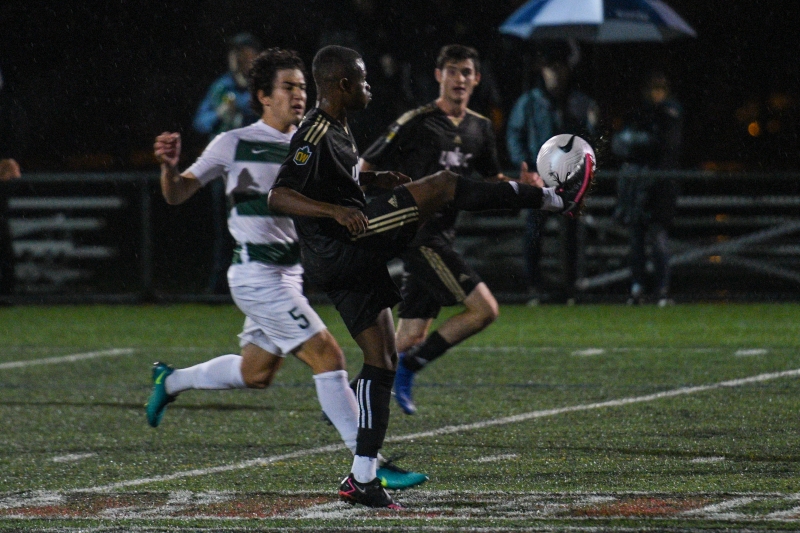 Just one minute in, it was worst case scenario for the Timberwolves. A Cascade was tripped up in the box, and the referee awarded UFV a penalty kick. Nikhil Reddy stepped to the spot, but his PK attempt sailed over the crossbar, missing the opportunity to grab an early lead.

However, in the fifth minute, the Cascades struck. A free kick from outside the box was sent in by David Parfett, finding the head of Trevor Zanatta who put it past a helpless Daniel Zadravec to open the scoring.

UFV continued to apply pressure, earning free kicks and corner kicks for much of the opening 15 minutes, and were rewarded again. A scramble in the box bounced to Reddy who hammered it towards the bottom corner. Zadravec made a diving save to his left, but Zanatta was there to deposit his second of the match. The Timberwolves argued that Zanatta was offside, and may have had a case, but the linesman’s flag stayed down.

In the 24th minute, UFV nearly added to their lead as Taylor Richardson found himself in on a break. He got a great shot off, but Zadravec made a sprawling save to knock it over the crossbar.

The Timberwolves showed some character late in the half, as substitution Gregor Smith nearly converted on a pass from Abou Cisse, but it rolled just wide of the post.

At the end of a nightmarish first half for UNBC, shots favoured UFV 7-3, who also held a 5-2 advantage in corners earned.

The TWolves came out the hungrier side in the second half, as the game got increasingly physical and contested. UNBC possessed the ball, but the Cascades backline did well to mute most of the UNBC opportunities in their third.

In the 64th minute, UNBC was rewarded for their increased intent. Kensho Ando took a pass from Hussein Behery and took his space, advancing towards to the Cascades box, before passing it to a waiting Stu Rowlands. The big senior turned and picked the far corner, beating Jackson Cowx, drawing the TWolves closer, making it a 2-1 game.

In the 84th minute, off a UFV turnover, UNBC sophomore Gregor Smith found himself in all alone on a run. He fired a shot labeled for the top corner, but Cowx made a great save to knock it out of play and maintain the Cascades lead.

The game turned into an end-to-end affair for the final ten minutes, with the two sides trading chances. However, when the final whistle sounded, both teams had to settle for a 2-2 draw. The finals shots were 12-9 in favour of the Cascades.

The TWolves return home for the final regular season games of the season next weekend, still mathematically in the Canada West playoff picture.

It will be the final home games for graduating seniors Owen Stewart, Alex Nielson, Hussein Behery, and Stu Rowlands.