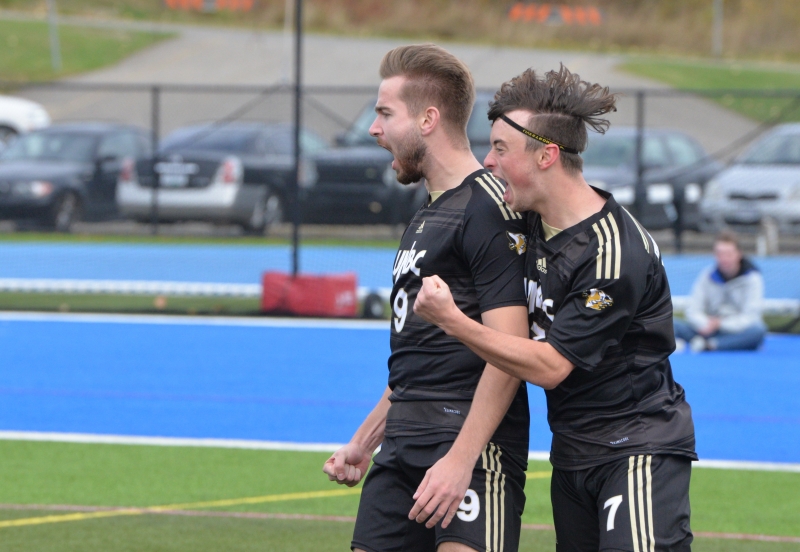 One day after having their offense thwarted by a strong UBCO defensive effort, the UNBC Timberwolves came out firing. The TWolves beat the Heat 4-1 on Saturday, October 2nd, 2021 in Prince George, BC.

Clearly the more assertive, intentional side, the TWolves pinned the Heat in the own end, and it didn’t take long to hit the scoresheet. In the fifth minute, midfielder Alex Nielson found a streaking Michael Henman who beat Heat keeper Nicholas Reitsma with a low shot for his long-awaited first of the Canada West season.

“It felt great. Finally. I have been getting so many chances and I have been a little hard on myself,” said Henman. “I am happy to finally get one in the bag.”

UNBC wasn’t done there. 14 minutes later, more from an inspired TWolves team. Owen Stewart did well to work his way into the box, and when a Hussein Behery shot was blocked, the Prince George product gathered it and chipped it over Reitsma into the top corner to double the UNBC advantage.

“They were checked in in the beginning and we weren’t,” said UBCO’s Jacob York. “I don’t think it was anything they did. It was just us, not checked in.”

Not satisfied, the Timberwolves struck again in the 26th minute. Again, Henman used his speed to give the UBCO backline fits and tested Reitsma on a break. The Heat keeper did well to block it, but the ball went off Henman’s face and landed in a perfect spot for Anthony Preston to tap it in for his first of the season.

The Heat did settle down from there, testing Daniel Zadravec with some moderate opportunities, but the UNBC keeper swallowed up the opportunities and the game went to halftime at 3-0.

“Some people think of us as underdogs, but we don’t see ourselves as underdogs,” said Henman, postgame. “We aren’t surprised. We are happy about it, but we are not surprised with it.”

“It is nice to open the account, especially against my hometown team,” said Smith. “It means a little bit more. I saw the space, coming down the line. I know Mike can put a great ball in. I just saw it and got my head on it. I never thought I would score a header for my first Canada West goal, but it happened and I am stoked.”

The Heat would settle down and possess the ball more from there, and they were rewarded for their efforts. In the 57th minute, Jacob York won a ball in the box off a UNBC turnover and made no mistake beating Zadravec and making it 4-1.

From there, UBCO Okanagan did well to continue to apply pressure, despite the deficit. Taylor Piche had the best looks for the Heat, putting both his shots just wide of the post, as the visitors represented themselves well in the latter parts of the match.

Eventually, the referee’s whistle blew, and UNBC had convincingly earned its first win of the Canada West campaign.

“The mindset is to win every game, but each weekend can bump you up pretty high,” said York, postgame. “This was a big weekend for us. It sucks that we didn’t win both, but next weekend.”

Henman led the way with a goal and two assists, to go along with five shots on goal.

“We need to keep going. We have to win,” said Smith. “We know we can play well. We have shown that throughout the year. It is time for results.”