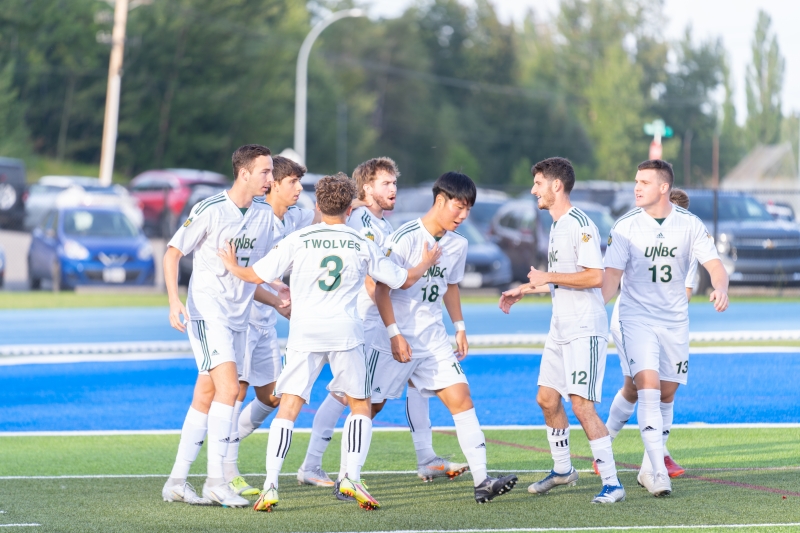 It was the performance the UNBC Timberwolves were looking for. Coming off a disappointing opening weekend, the TWolves jumped on the Victoria Vikes early and didn’t look back, topping the visitors from the Island 4-1, Friday, September 2, 2022 in Prince George.

It didn’t take long for the Timberwolves to come out firing. Applying pressure from the get-go, UNVC earned a corner kick that paid off in the third minute. Loic Benquet sent the ball into the box and found the head of Michael Henman, who buried it past Vikes keeper Harjot Nijjar for his second of the season to open the scoring.

In the 16th minute, the Vikes responded. After a foul 25 yards out, Victoria’s Javier Sagaste put a perfect free kick into the box that Sam McDonald found with his head, beating UNBC’s Daniel Zadravec to knot the score 1-1.

Steve Simonson’s squad took over from there. Henman potted his second of the game after he found himself unmarked in the Vikes’ box, giving him three goals in three games, off a pass from Connor Lewis. Then, Lewis had a chance to extend the advantage, but found the post behind Nijjar.

Continuing to apply pressure, the Timberwolves were rewarded in the 39th minute, off the foot of a newcomer. Making his Canada West debut, midfielder Koby Greaves took a pass from Anthony Preston, walked to the top of the box and put a perfect ball past and extended Nijjar to make it 3-1.

Shots at the half were 12-3 in favour of the home side.

Victoria made five substitutions at half, looking to change momentum and find a spark, but the TWolves weren’t having it. In the 66th minute, Henman completed a beautiful performance against his hometown team. On a rush created by a Graves pass that sprung speedster Gregor Smith, eventually led to a Anthony Preston shot in close that was turned away, before Henman buried the rebound to complete the hat trick.

Victoria showed signs of life late, attempting to send balls over the top, but defenders Hagon Kim, Cody Gysbers, and Kayden Miner did well to hold the fort the rest of the way.

With the victory, UNBC improved to 1-1-1, while the Vikes fell to 0-2-1. The two teams will match up again on Saturday night to complete the back-to-back series.