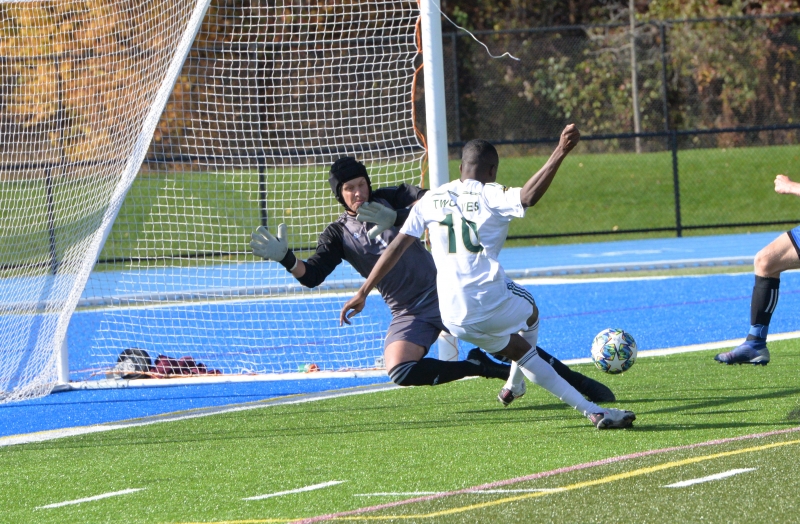 A goal in the 90th minute proved to be enough, as the UBC Okanagan Heat edged the UNBC Timberwolves 1-0 on Friday, October 1st in Prince George.

The teams collaborated for a special moment at the opening whistle, each side dropping to a single knee, showing respect and recognizing the National Day of Truth and Reconciliation. With 700 School District 57 students in attendance on a hot day in Prince George, the Timberwolves and Heat came out with each side determined to protect their own third.

The Timberwolves were able to earn to better chances in the early going, including a pair of balls that narrowly missed the surging foot of Anthony Preston, but the Heat did well to limit the home side from there.

Late in the half, it was UBC Okanagan applying the pressure, earning a trio of late free kicks in the TWolves end. Jimmy Steel and Sam MacDonald had the best looks at goal, but UNBC keeper Daniel Zadravec was there to gather the shots.

At the half, shots were dead even at 5-5, reflecting a hard-fought first 45 minutes of Canada West action.

In the second half, the Timberwolves were the more assertive side, and nearly got on the sheet in the 65th minute. A Heat turnover led to a run by Kensho Ando who slide is across the box to Abou Cisse, who had his sliding attempt turned away by UBCO keeper Nicholas Reitsma.

“I think Kensho is our best performer. I don’t like to single out, but he has been so good and so steady,” said Steve Simonson, postgame. “He is the heart and soul of our group. He has been the most consistent.”

Then, in the 79th minute, Ando gathered the ball 45 yards out from goal and kept taking space, advancing into the UBCO box, but his drive was also turned away by Reitsma.

“Just trying to stay focused in those moments. They had a great string of possession and created some brilliant chances,” said Reitsma. “We had to be switched on. For me, it is taking each moment, not getting ahead of myself, and just trying to stay present.”

In the 90th minute, the Heat’s defensive commitment was rewarded in the offensive end. Off a throw-in, Owen Spicker found himself unmarked on a ball from Felix Jones and was able to tap is past Zadravec to make it 1-nil.

“A couple new players, and we have had some depletion in the back,” said UNBC coach Steve Simonson. “That one was a stinger for sure, but full credit to UBCO for pinching one in the end.”

The Timberwolves ran out of time from there, as UBCO settled into a defensive shell and held off any potential Timberwolves’ momentum.

“Obviously, we are disappointed and frustrated,” said UNBC’s Abou Cisse. “Coming into the weekend, we were thinking a six-point weekend. We played well and had some good chances. At the end of the day, thinking about the loss is not going to do us any good. We have to put this loss behind us and come back stronger tomorrow.”

Shot were 11-9 in favour of the Timberwolves.

“It was 90 minutes, plus five of heart. It is always difficult coming to PG. They’re a great team and they’re well coached,” said Reitsma, postgame. “We showed the grit we have as a group, to battle for 90 minutes and come out with three points on the first day.”

The two teams will clash again on Saturday at 12 PM in Prince George.

“There are minutes left on the clock, so we keep going. That is what we are going to do,” said Simonson. “We have no one to blame but ourselves, through seven games. We could have done better than we have, and we have to stop talking about it.”