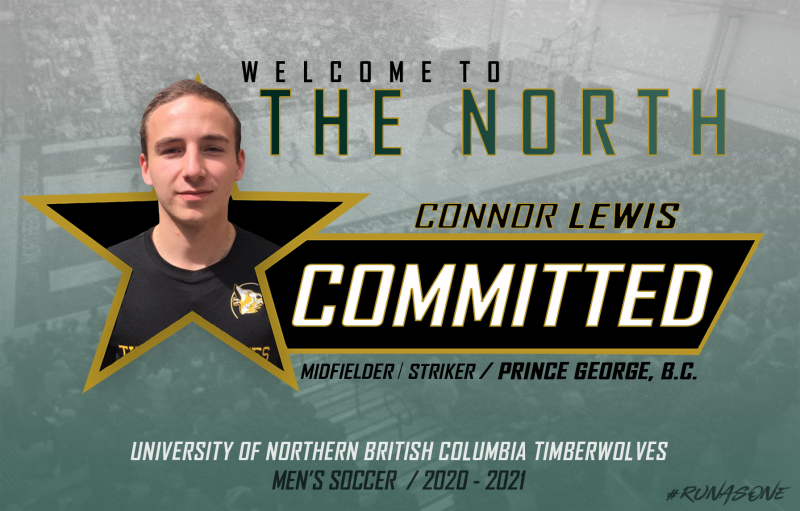 He is a star on the basketball court, but he will be representing his hometown on the soccer pitch. University of Northern British Columbia Men’s Soccer is proud to officially announce the commitment of Prince George product Connor Lewis to the varsity roster.

“I am really excited for the opportunity to play at UNBC. It’s my hometown team and I grew up watching them, so it’s really an honour and a great opportunity. It was a couple years ago when my brother graduated and signed with UNBC that I started asking myself whether or not playing university soccer was something I wanted to pursue. I quickly realized that it was.”

Lewis is the younger brother of current TWolf Graeme Lewis and son of UNBC assistant coach Rob Lewis. The 18-year-old says the opportunity to play alongside Graeme was an added bonus to continuing his athletic journey at the highest level of university sport.

“It’s going to be fun. I am used to playing with my Dad coaching someway. I haven’t gotten many opportunities to play with my brother, but hopefully it’ll be fun. I’ve been watching them since I was young, and the leaps they have been taking the last couple years; it is constantly improving. I am excited. It has been going uphill ever since I was young.”

Lewis stands a shade under six-foot-three, with a frame and fluidity that suggests he possesses the physicality to become an impact athlete at the Canada West level. The midfielder/striker knows there will be a jump to the university level, but he is ready for the challenge.

“I think I have pretty decent skill, and control with the ball. I have good fundamentals. I am also tall and can use my body and strength. It’s a pretty good combination. I think playing at a faster pace is something I need to work on. It is just such a jump. A consistent level of play. I need to work on that, just being able to handle that pressure.”

Lewis and his Prince George Impact U18 team earned a bronze medal at the BC Provincial Championships in 2019. On that squad, he was teammates with current TWolves Demian Dron and Julian Daduica. UNBC coach Steve Simonson cites his new recruit’s physical tools and mental toughness as major assets as he begins his U SPORTS career.

“We are incredibly excited to add Connor to our program. He is not just a great young soccer prospect but a top multi-sport athlete. He has incredible grit within his game and has the potential to come to our program be a quality player for us. Connor is well known among our current players, and I am confident he will fit in really well with our group on and off the pitch.”

Despite being a go-to guy for his soccer teams over the curse of his career, the Duchess Park student really emerged on the court for the Condors this season. He was part of the DPSS team that advanced to the BC final, and was named a Provincial AAA All-Star at the conclusion of the season. Lewis hopes his experiences on the pitch continue to aid his success on the pitch for the Timberwolves.

“Basketball and soccer are two good crossover sports. My soccer helped with my footwork in basketball, and my basketball helped with my versatility in soccer. I always had an amazing experience playing basketball. I was blessed with amazing coaches and teammates, and it was awesome. That carries over to soccer; the team mentality and working towards a common goal.”

The Principal’s List honouree will graduate from Duchess Park this month, and intends to eventually pursue a career as a clinical psychologist or in law. On the pitch, he is ready to take the next step with the TWolves, competing in the game he has been playing since he was a little boy growing up in Northern BC.

“It has always been my main passion. It is something I have worked hard at and cared a lot about. It’s a really fun thing to do.”