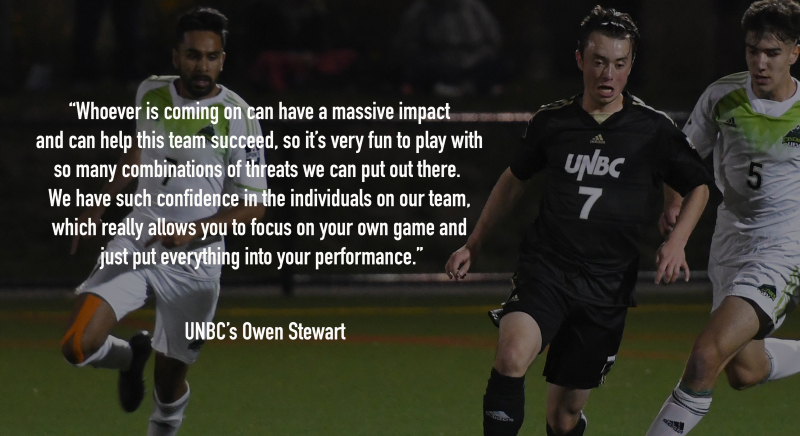 Player to watch: Dane Domic, M
A first-year midfielder, Domic has had a tremendous start to his Canada West career, registering four point in his first three games, including a three-point effort against the Calgary Dinos. A native of Calgary, Domic is another offensive weapon on a Cougars side that is deep and dangerous.

Player to Watch: Demian Dron, D
A freshman defender who is tasked with patrolling the centre back position, Dron has asserted himself well for the Timberwolves. Standing six-foot-five, the Prince George product has all the makings of an impact player at the Canada West level, and he will have to be decisive and gritty against Mount Royal.

On if there is a difference in preparation with just the single game…
“I think preparation is the same, whether it’s one or two games, home or away. We are going to be focusing on what we can improve on, and just making sure we’re ready to give it everything for that one game.”

On magnitude of the win in Victoria…
“A massive win like that always feels amazing.  To get three points against a very good Victoria side makes it incredible, and I think it really gives this group a nice boost of confidence, which I anticipate will help us in the long run.”

On the matchup with the Cougars…
“MRU is a very good team. They have some good pieces that can cause any team threats, and they are going to look to continue their fantastic start. I think, if we focus on our strengths and how we’ve won this year, we’ll be just. It will be a very exciting game this weekend.”

On depth of Timberwolves roster this season…
“Our team has so much depth, and it’s a major plus for us.  Whoever is coming on can have a massive impact and can help this team succeed, so it’s very fun to play with so many combinations of threats we can put out there.  We have such confidence in the individuals on our team, which really allows you to focus on your own game and just put everything into your performance.”