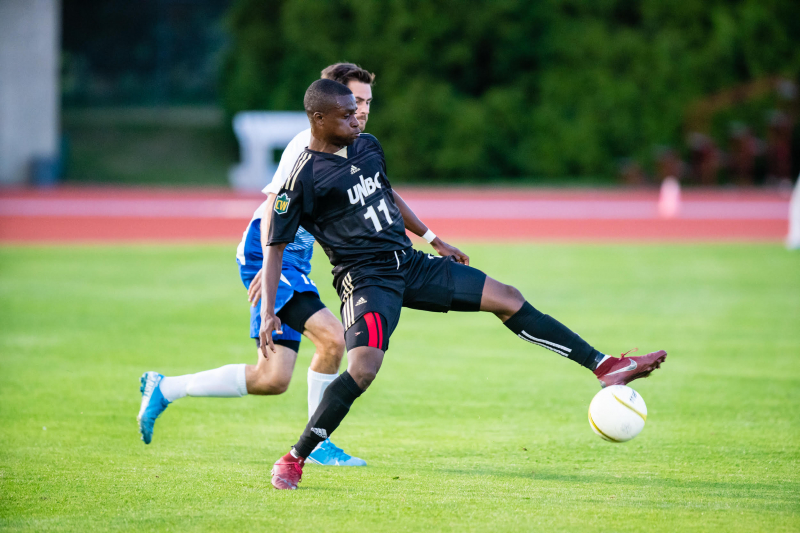 The University of Northern British Columbia Men’s Soccer team needed a big half. Sitting 1-3-1 on the season and knotted in a scoreless tie with the University of Victoria Vikes, their oldest player came up big to propel the Timberwolves to a crucial 2-0 victory over the Vikes on Saturday, September 7th, 2019.

The TWolves looked to be the more desperate, motivated team on the night, controlling much of the first half, generating the better chances and moving the ball through the Vikes defense. The best opportunity came in the 37th minute when Stu Rowlands took a throw in, dribbled into the box and fired one low, requiring a diving one-handed stop from Jas Lally. Shots were 5-2 in favour of the visitors after 45 minutes.

In the second half, Rowlands, who is the oldest player on the UNBC roster by four years, would not be denied. In the 52nd minute, the TWolves moved through the Vikes formation, before 4th-year Owen Stewart played a deft ball to Rowlands at the top of the box. He made no mistake, crushing it top corner past a helpless Lally, for his first of the season.

“It meant a lot, as I get back into it here,” said Rowlands. “Owen made it pretty easy for me, and all I had to do was it pop it in the back of the net. That was pretty much it.”

Five minutes later, Stewart again played the role of setup man, putting a ball over the defender’s head to a streaking Rowlands who put it through Lally’s legs into the gaping cage.

“Today was much more indicative of what we want to achieve as a team. I felt Friday, we spent our whole focus on dealing with Victoria’s attack,” said UNBC coach Steve Simonson. “We never settled into any sort of passing game, and really didn’t deserve much out of the game. Today we had a confident approach with the ball, and I felt for the most part, we dominated possession in the game. Stu added a veteran presence up top and scored a couple of nice goals.”

The Vikes would have a pair of chances to get on the board, but the Timberwolves did well to deny the home side. Late in the match, Jose Sagaste looked to have a break, but veteran TWolves defender Aidan Way made the diving recovery to snuff out the opportunity.

Rob Goodey did the rest between the UNBC pipes, stopping a Matteo Ventura header in the final minutes to secure the clean sheet for his side.  He made three saves on the evening, while Lally made eight saves for the Vikes.

“It is a good confidence boost for us, because Victoria is obviously a very talented team,” said Stewart, postgame. “To beat them on the road, going forward we are looking good. We have to keep fine-tuning, and I think we will be fine.”

With the victory, UNBC improves to 2-3-1, while the Vikes drop to 3-3-0 on the Canada West season. The Timberwolves host the Mount Royal Cougars next weekend, while Victoria hosts the Alberta Golden Bears and Saskatchewan Huskies.

“Today was a real team performance,” said Simonson. “From back to front, we were much more on the same wavelength and played some of our best football of the year in the second half of the game.”