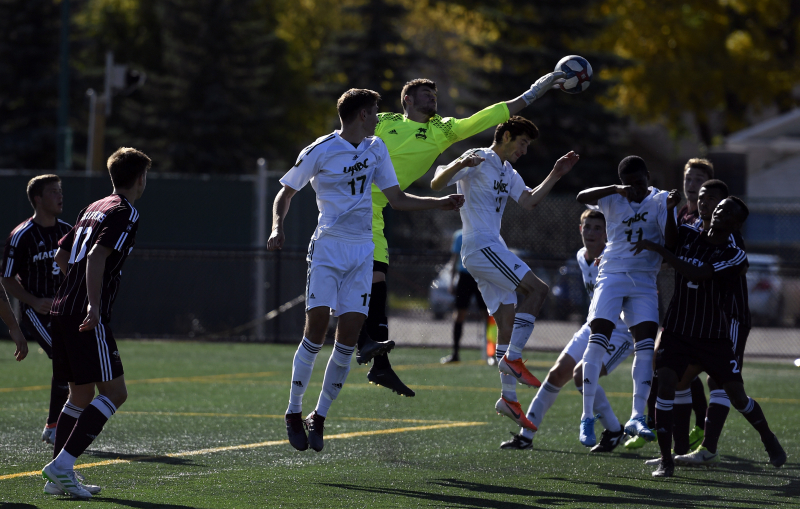 EDMONTON – For such a wild, offensive game with three crossbars and a post between the MacEwan Griffins and UNBC Timberwolves on Sunday, a scoreless draw seemed the likely result as the match wound down to the final whistle.

But in a script that’s unfortunately all too familiar for the Griffins, they lost on a late goal again – this time in the 82nd minute – falling 1-0 to the Timberwolves in Canada West men’s soccer action at Clarke Stadium.

Stu Rowlands found some daylight in the middle of the defence and charged in on keeper Seth Johnstone, who got a piece of his shot, but it landed right on the boot of unchecked Owen Stewart, who cashed in the empty net.

“Absolutely it’s disappointing and it’s frustrating,” said Griffins head coach Adam Loga, whose team lost to UBC a day earlier on a goal in the 87th minute. “Again, I don’t have the answers for it.

“We just need to bury our chances. We had three or four in the first half and we could have just ended the game, but we kept them hanging around and we came up short again.”

Both teams had a right to be frustrated over missed chances. The game log is filled with 10-bell opportunities that went unconverted.

In the 11th minute, Anthony Preston snuck in behind the MacEwan D and lobbed it over Johnstone’s head, but it went off the crossbar. MacEwan’s Kapri Simmons had a near identical play in the 21st but didn’t get as much on the shot and UNBC’s defence recovered to parry it away.

Griffins striker Everett Orgnero then had two glorious chances. He was in alone in the 28th but couldn’t beat keeper Daniel Zadravec before hitting the post in the 33rd minute off an inspired run down the right side.

MacEwan kept coming early in the second half as Stefan Gajic volleyed one just over the bar from in tight in the 51st and Rakan Yassin fired a rocket from a prime position too high in the 54th.

UNBC hit back with Jonah Smith heading a free kick from the side of the box off the crossbar in the 66th and Preston hitting his second crossbar of the day in the 71st.
Finally, they found the right finish to put the game away.

“Today, I thought maybe because we had a lot of possession and weren’t scoring that we might get deflated, but with Stu coming up top, he created a lot late in the game,” said UNBC head coach Steve Simonson. “Then Owen finished off his work there. You just stick with it, it’s all you can do.”

And it’s all MacEwan can continue to do, despite now falling four games below .500 on a season so tight they could easily have a winning record.

“The difference between winning and losing is so fragile,” said Loga. “These young men are really starting to learn that. Every game’s been really tight, really close. They’ve all been one-goal games. We just have to find a way to get points and sadly we haven’t been.”

UNBC returns to Prince George to host UBC on Sept. 27 and 29, while the Griffins next visit Mount Royal University on Sept. 28 and Calgary on Sept. 29.