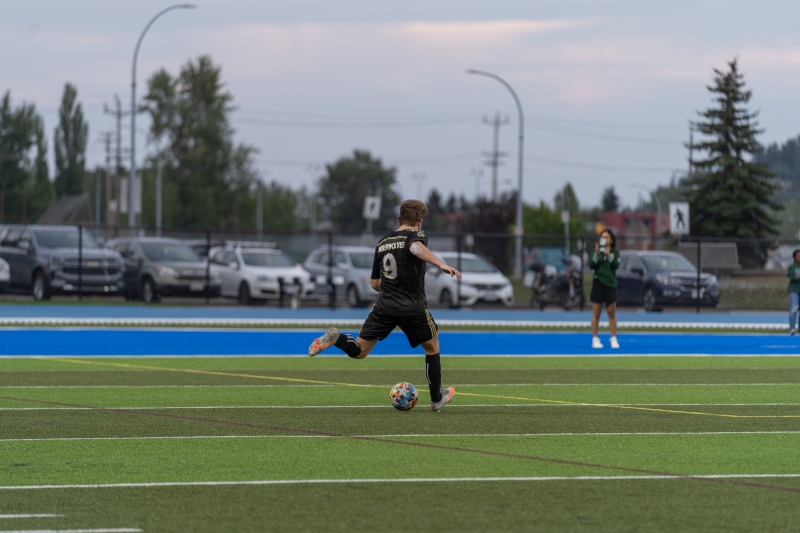 Michael Henman had a weekend that won’t soon be forgotten. Coming off a hat trick on Friday night against his hometown Victoria Vikes, the 4th year forward affectionately known as the Mailman, for lack of a better word, delivered again. Henman scored all three Timberwolves goals in a 3-0 UNBC victory over the Vikes, completing the six-point weekend for the TWolves.

In the 11th minute, the Connor Lewis played a gorgeous pass to Henman from his own half, and the striker did the rest, beating the defender and sliding the ball past a sprawled out Harjot Nijjar to open the scoring.

The Vikes did respond nicely, pressuring the ball with more intent and speed, creating some chances in the UNBC third. The best look was off the foot of Andrew Gibbs, who found himself in close, but couldn’t beat a diving Daniel Zadravec who did beautifully to turn away the center back’s chance.

In the 36th minute, Henman struck again. Loic Benquet snaked his way through the defense and slipped it to Henman in the box, and he deposited it to send the Masich Place crowd into a fervour.

Victoria turned their intensity up in the second half, hemming the TWolves in for stretches, but the trio of Kayden Miner, Hagon Kim, and a brilliant Cody Gysbers held the fort and did enough to limit the Vikes attack.

Holding on to the two-goal advantage, it was time for more dramatics. In the 90th minute, Gysbers took the ball and sent Henman one-on-one against Gibbs, with Nijjar out beyond the box. Henman showed his finishing savvy, chipping it from 35 yards out into the net, as the keeper scrambled back to his gaping cage.

“That assist. I love it,” said Henman, postgame of his teammate Gysbers. “That guy is my best friend. That assist. It feels unbelieveable.”

The goal was Henman’s sixth in two matches, and put the cap on an incredible individual and team performance.

When the final whistle blew, the TWolves had earned a well-deserved 3-0 victory and six-point weekend against their divisional rival.

“We were so solid. Our backline. Every single person on this team was so solid,” said Henman. “That is why we won 3-0.”

The back-to-back hat tricks are the first in Canada West history, with the conference record books dating back to 2006.