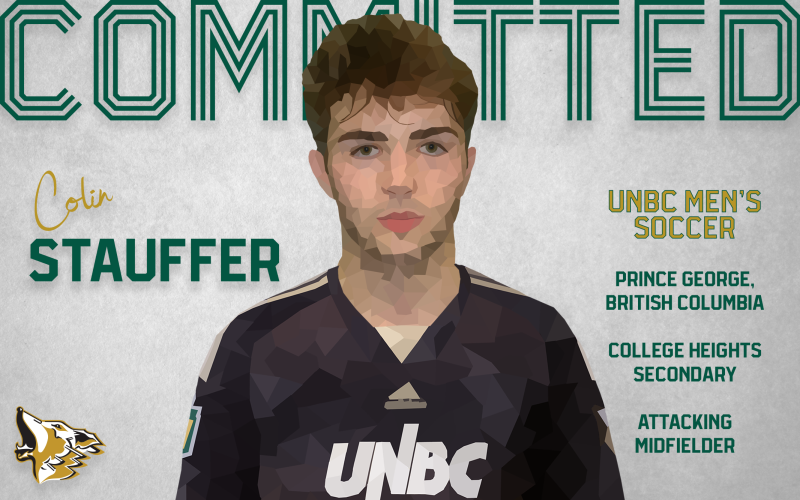 The University of Northern British Columbia Men’s Soccer team didn’t have to look far to find a dynamic attacker who is sure to prove to be an impact player at the university level. Today, the Timberwolves made it official, announcing the commitment of Prince George product Colin Stauffer for the 2022 Canada West season.

“I am extremely excited. I have been training with Steve’s academy for so long, and training with all the Timberwolves, to finally make that step is really exciting. When I was 13-year-old, I started to take soccer more seriously, and once I hit 16, I knew I wanted to go to the university level.”

Stauffer is no stranger to the Timberwolves family, having joined the Jr Timberwolves Academy when he was in grade nine. The attacking midfielder was able to learn from UNBC coach Steve Simonson, as well as TWolves assistant coaches Francesco Bartolillo and Rob Lewis.

“By Grade 10, I was training with the first team, then Steve brought me up. They’re the best coaches I ever had. I love the way they coach and the system we have here.”

Adding a player of Stauffer’s skill and dedication was an opportunity Simonson couldn’t pass on. His newest TWolf plays the game with speed and technique, but the UNBC bench boss says it’s Stauffer’s approach to training that will allow him to grow into an impact player at the Canada West level.

“I have had the pleasure of coaching Colin in our academy programs over the past couple of years and in that setting, he has demonstrated all of the characteristics that we look for in a young player. His approach to training is second to none, he is a great technical player, and his insight matches our playing philosophy perfectly. He will only benefit more from being in our environment full time and we expect him to be a quality addition to the program.  We are so happy to have him commit to the Timberwolves.”

Standing five-foot-eight, Stauffer is never the biggest athlete on the pitch, but he may be the most focused and intentional. At College Heights Secondary, playing for former Timberwolf Johnathan Botelho, the 18-year-old was named the ‘AA’ Zone Most Valuable Player, thanks to his 11 goals and seven assists in just four games.

“I am more of an attacking player. I am good at shooting the ball, through balls, crossing the ball, and playing the midfield. I am sure the speed of play is a lot different, as well as the physicality. You have to see the game quicker.”

Stauffer started playing the game PGYSA at three-years-old, and began truly focusing on the sport when he joined the Jr Timberwolves Academy. He competed alongside the Vancouver Island Wave in a number of showcases, but cites his time training with the Timberwolves varsity team as an incredibly effective training atmosphere. While he acknowledges the leap to the highest level of university sport is a steep one, he is ready for the challenge.

“The group has been unbelievable. A great group of guys. They have welcomed me right away. It is sure a different level of training. I have to play faster and keep my head up. But it is getting there.”

Stauffer is set to graduate from CHSS in June, and has aspirations of pursuing engineering or physiotherapy. He will join his new teammates for training camp in August, and is already imagining putting on the UNBC kit, playing for the team he grew up cheering for.

“It is a nice bonus because my family to come out to games. I grew up watching the Timberwolves, being in the atmosphere at Masich Place Stadium. It has been really cool. I can’t wait to see my friend and family out there.”