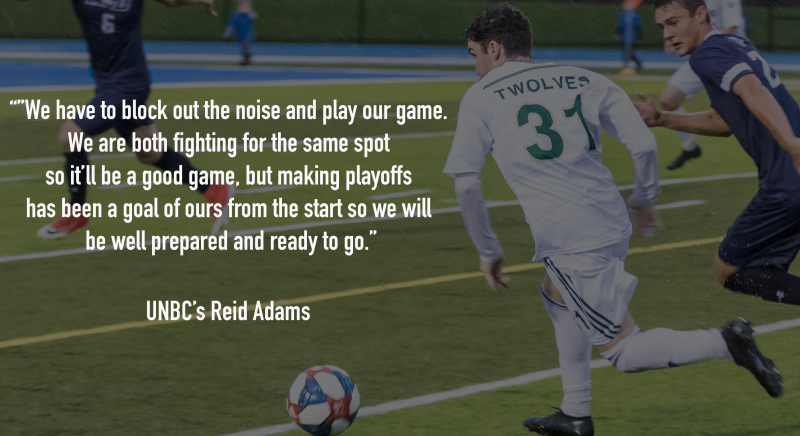 Player to watch: Rob Goodey, GK
The veteran netminder has been tremendous for the TWolves all season, providing a steadying leadership behind a very young backline. Goodey’s athleticism makes up for a perceived lack of size, and he will need to be dynamic against a talented WolfPack attack.

Player to watch: Justin Donaldson, F
A fifth-year attacking player suiting up in the final weekend of his Canada West career, Donaldson has long been regarded as an elite talent in the conference. Forced to play a number of positions on the pitch, Donaldson serves as the motor for the Pack, and provides leadership to a team that has earned CW bronze medals in back to back seasons.

On approach going into the final regular season weekend…
“Were only focusing on what we can control, which are our games against TRU. The rest is out of our control. We have to block out the noise and play our game. We are both fighting for the same spot so it’ll be a good game, but making playoffs has been a goal of ours from the start so we will be well prepared and ready to go.”

On personal learning curve in freshman season…
“The biggest learning curve for me has come off the pitch, where I had to learn how to balance my time efficiently between school and soccer. It has been tough, but I’m continuing to improve at this as the year goes on.”

On expectations for seniors weekend…
“With senior weekend coming up that means the end of the season is coming up which is always sad. With seniors weekend approaching it’s obviously a special time, especially for Johnathan Botelho, who is graduating. It’ll be an emotional weekend, because it’s always hard losing teammates.”