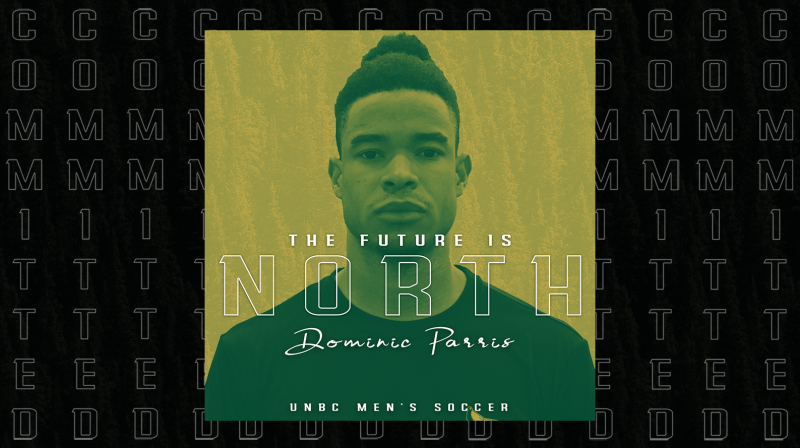 The University of Northern British Columbia Men’s Soccer team has added a major dose of speed and athleticism, officially announcing incoming transfer Dominic Parris for the 2021-2022 Canada West season.
“This is a great experience. I am looking forward to it. It feels very professional and I like the setup. The facilities are amazing and I am looking forward to the next season. Coming out here and training with the boys, it is great. I look forward to the coming season.”
Parris arrives in Prince George from the York University Lions of the Ontario University Athletics conference, where he was on the training roster for the 2019-2020 U SPORTS National bronze medalists. The 21-year-old says he expects a smooth transition, partly because he understands the schedule and expectations of a varsity athlete at the collegiate level.
“I am definitely used to this university vibe. I have been around varsity sports, so I understand what it is like and the demands. I am looking forward to this new scenery.”
Born in Falmouth, Jamaica, Parris moved from to Jamaica to Barbados at nine-years-old, before moving to Calgary at 12. The six-foot-one striker moves with fluidity and explosiveness, and is hopeful his skillset is of use to the Timberwolves in the upcoming Canada West campaign.
“I am a fast player. Jamaican roots, you know? I like to run. I am a pretty quick player, and very versatile, as well.  I am pretty good on the ball. I have good vision, and I like to score goals. Hopefully I can bang a couple in and get a couple assists this season.”
Parris’s father lives in Prince George, so he found himself in town and aware of the Timberwolves program. The chance to make UNBC his home became appealing, leading to the decision to transfer to the green and gold. UNBC coach Steve Simonson says Parris possesses tremendous physical abilities, but also a love for the game that has led to great early chemistry with the current TWolves.
“I am really excited to have Dom join our program. He has made a great initial impression on everyone here so far. Dom brings strong athleticism and attacking prowess to the group and I think he will be a very positive addition. He also fits the chemistry of the group really well. He is humble, hard-working, and will be a fantastic member of the Timberwolves family.”
Upon arriving in Canada, Parris joined Foothills FC, where he quickly made an impression on the same club that helped cultivate UNBC legend Tofa Fakunle. He would help Foothills to a second place finish at U14 Club Nationals, and a fourth place in the U16 Club Nationals, before earning a spot on the U16 Alberta Provincial team, and winning a gold at the Western Canadian Championships. He is hopeful to add more hardware to the trophy case when he dons a Timberwolves kit.
“I want to make my own mark here and, of course, help the boys achieve big things. Hopefully we can win the whole thing. You have to strive high, so that’s what I am looking forward to.”
A graduate of Central Memorial High School in Calgary, where he was named MVP in his senior season, Parris will join his new teammates for training camp ahead of the 2021 season. With an academic eye on pursuing sports medicine, he is ready to suit up and continue to play a game he started when he was five years old.
“It’s fun. It’s something I have been doing since I was walking, basically. Something about it; I look forward to doing it every day. There are never any days where I wake up and feel like I don’t want to work out or play soccer. Everyone in my family plays. It’s great, and I look forward to it every day.”