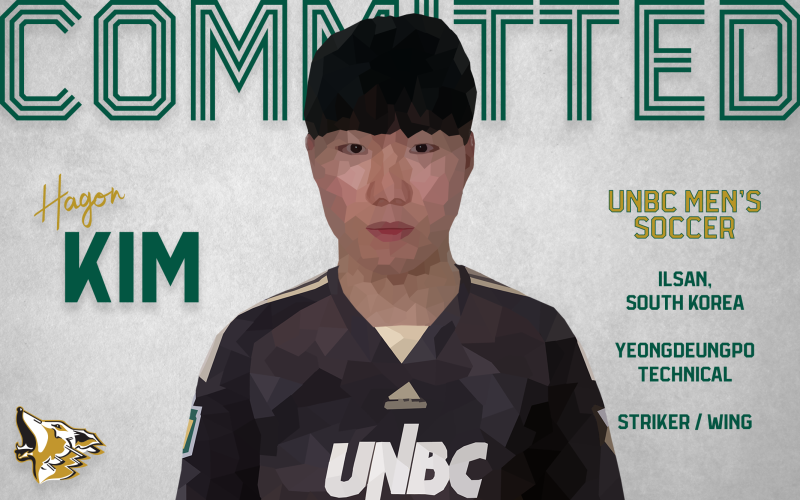 When the season begins, he’ll be 7,856 kilometres from his hometown of Ilsan, South Korea, but Hagon Kim will be exactly where he wants to be. Today, the University of Northern British Columbia added a dynamic piece to its attack, officially announcing the commitment of Kim for the 2022 Canada West campaign.

Kim visited the UNBC campus for a tour and training session with the Timberwolves, and says the experience was crucial in his decision to commit to the program.

“Visiting UNBC was an amazing experience and opportunity for me. I was looking for a team I could have an endless amount of fun with, on the pitch and off the pitch. As soon as I met the boys in Prince George, I was welcomed by all of them. They made me feel like I was on the team already.”

Kim’s path to Prince George is a unique one; raised in Ilsan, a city northwest of Seoul, he moved last year to Parksville, on Vancouver Island. He will graduate with his secondary school education this Spring, and sees UNBC as the ideal location to continue his educational pursuits.

“Most importantly, UNBC offers a great education, which is what I was concerned with the most as a student. I feel very grateful that everything worked out really well for me. It is an honour for me to be part of this school.”

An incredibly strong and powerful athlete, Kim is an imposing figure on the pitch. With the ability to play on the wing, at striker, or as a wingback, he plays with pace and purpose. When asked about making the jump to the highest level of university soccer in Canada, the 18-year-old feels ready to adjust and contribute.

“I feel quite prepared. I just need to melt into the colours of the team as soon as I join the squad. I play really fun soccer that everyone will enjoy watching. I promise the fans this year will be fun.”

UNBC coach Steve Simonson first learned of Kim because of his new recruit’s impressive performances with Nanaimo United of the Vancouver Island Soccer League. Playing among men, Kim earned a reputation for his skill and passion for the game. Simonson invited him to UNBC’s campus for a visit, and the mutual interest became apparent. The TWolves bench boss is thrilled to bolster his program’s attack with an athlete of Kim’s calibre.

“We are very excited about having Hagon Kim join the Timberwolves. He made a great impression during his visit to the campus and fit very well with the team. From his personality and technical ability to the way he likes to play the game he is a great fit. He is a great athlete with good technique and game insight. Once he establishes the on-field chemistry with our team I think he will be a great addition to our program.”

Every time he shoots the ball, Kim looks to score, which will be an ideal addition to the Timberwolves roster. During his visit to UNBC and the Northern Sport Centre, it was hard to wipe the smile off his face, as he trained alongside the Canada West varsity roster. According to the dynamic scorer, don’t expect that smile to go away.

“I am looking forward to competing at university level soccer, and having a lot of fun. Soccer is the only sport where I find joy. I become the happiest person in the world as I play soccer.”

Set to graduate from Ballenas Secondary, Kim did his research on the program that made the most sense for him on the pitch, as well as an academic fit. He will study in UNBC’s Commerce program, and continue on a path playing the game he has loved since he started playing when he was eight years old.

“I learned, watching some of the Timberwolves games, that they play high-quality soccer with skill. By feeling and seeing those things, I have become even more happy and excited. I am very happy to be part of this team. I believe every moment in Prince George will be an unforgettable memory in my life.”