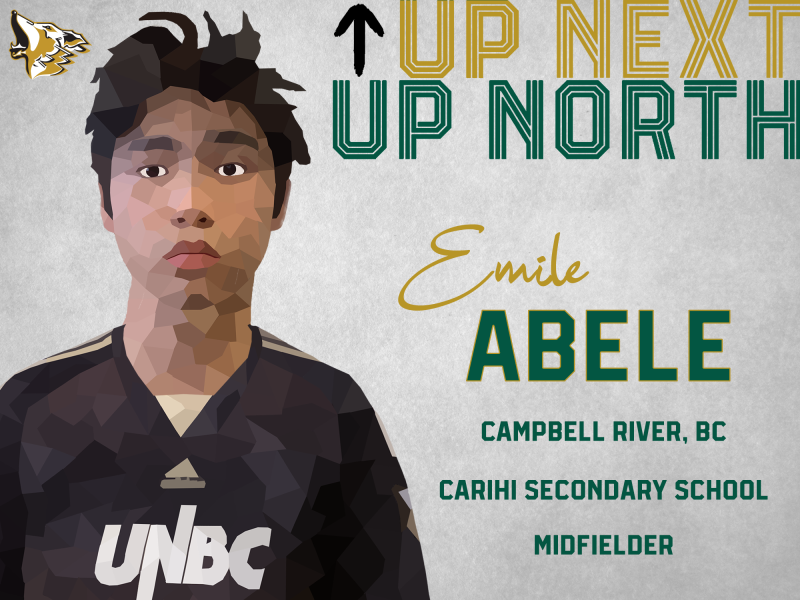 The University of Northern British Columbia Men’s Soccer team has looked to Vancouver Island to bolster its midfield for the years to come, officially announcing the commitment of immensely talented Emile Abele for the 2022-2023 Canada West season.

“Playing at the U SPORTS level and being able to commit to such a great moment means a lot to me. It means a lot to my family, my friends, my coaches, to everyone who has helped me throughout my career. I felt wanted. Steve was always quick to answer my emails, my texts, my calls. I have heard from others who have attended that school, and all of it seems like there is a positive vibe to the school and the program. I am just excited to start training.”

A product of Campbell River, where he competes in the Comox Valley United first division for coach Adam Mooi, Abele is a smooth athlete with the ball at his feet, possessing the soccer IQ to drive play and make threatening plays in transition.

“The game will probably be much faster and more physical. Games will be played at one hundred percent the whole game and I am expecting a big change in pace. I am a comfortable midfielder who likes to have the ball at his feet. I can run in behind and I can score a few goals, too.”

UNBC coach Steve Simonson knew of Abele as he came up the youth ranks, and was able to connect with his new commitment over the course of the recruiting period. The opportunity to bolster his roster with an intelligent and speedy midfielder that can attack and defend was an opportunity he jumped on.

“We are really excited to welcome a player and person of Emile’s caliber to our program. First of all, he has a real love for the game, and a hunger to improve with every training session. Emile is a really intelligent player, with strong understanding of movement and structure. I am looking forward to watching him grow and helping him develop into a big player for our program.”

Abele is a two-time provincial champion in the BCSPL, and is recognized for having an unwavering appetite to keep improving his game. In fact, he would drive 3.5 hours, three times a week, just to practice at an elite level. But beyond the pitch, he is excited to begin his post-secondary education at UNBC, where he will enroll in the Wildlife and Fisheries program.

“What stood out were the programs the school is offering. I enjoy the outdoors and I thought the programs were extremely interesting. I just can’t wait to start studying.”

Standing five-foot-eight, Abele is never the biggest and more imposing athlete on the pitch, but that has allowed him to grow other part of his game. Playing for coach John Jepson, Abele was a BC Provincial AA silver medalist with Carihi Secondary, where he also competes in basketball and rugby. The all-around athlete is thrilled to make the leap to the highest level of university sport in Canada.

“I am looking forward to training every day and being in that environment with the boys. Proving myself to the coach and everyone else that I belong. Long term, I want to be a big part of that team. I want to be a key player for UNBC. I am just happy to be able to play at the highest level in Canada.”

Abele will graduate from Carihi in June and join his new teammates for his first Canada West training camp in August. The newly-18-year-old is ready to continue a journey that started when he was just four years old, playing the sport he loves.

“I love to compete. I love to fight. I love to play and be around my friends. I like the environment that comes with being a soccer player and the joy it brings me in my life.”