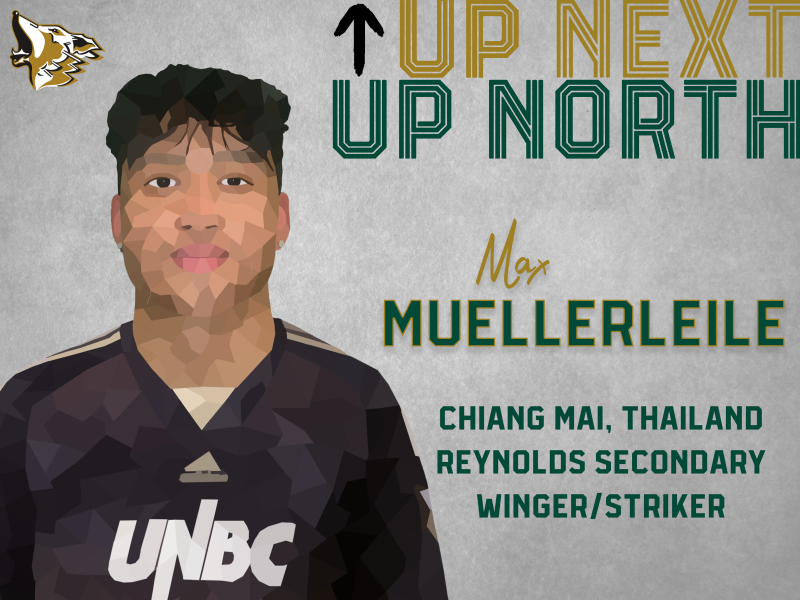 “This has definitely been one of my goals in my soccer career. To play Wave, and then move on and study, and at the same time, play a good level of soccer. UNBC struck me. It was further away from home and I was trying to get away and travel a bit. High level university soccer is something I want to do, and UNBC is a good fit for me.”

Muellerleile has charted an interesting path to join the Timberwolves. The broad-shouldered speedster is a product of Chiang Mai, Thailand, before moving to Vancouver Island for much of his youth soccer. In Grade 9, he headed to Germany to play at an elite level, before returning to Victoria to compete with the storied VI Wave program. Muellerleile hopes those experiences, along with a keen dedication to bettering himself every day, will help in the transition to university soccer.

“I am always keen to explore, especially when it comes to soccer. I played in Europe and saw that was like. I played in Canada and saw what that was like. The physicality of the game and the speed. I have been going to the gym a lot, focusing on muscle in my upper body and legs. Trying to get stronger so I can compete with guys who are in their third or fourth year of university.”

Playing for former UNBC coach Sonny Pawar in the Wave system, the 17-year-old became familiar with the Timberwolves program and made a trip to the Prince George campus for a visit and training sessions. TWolves coach Steve Simonson was impressed by his newest commitment’s dedication and limitless potential.

“We are really excited to add Max to our program. I have enjoyed getting to know him during this recruiting process, and he has shown a genuine interest in coming to UNBC to take his game forward. I think Max has a ton of potential to play at U SPORTS level and I believe our environment can help bring that out of him. He is physically strong and technically sound as a player and these qualities will serve him well at the next level. It’s a really good day for us.”

Standing five-foot-nine, Muellerleile is not the tallest player on the pitch, but he may just be the strongest. Playing with intent and pace, the winger / striker is a threat with the ball at his feet. It is no surprise to learn that attacking defenders and putting goals on the board is his favourite on-pitch activity.

“On the field, I am very focused. I like to play left wing or striker, and being in the top three on the field. Scoring goals, going towards the net. Running at players, attacking players. I definitely like shooting and scoring goals. It’s what I like most about playing soccer.”

Muellerleile had a chance to spend a few days at UNBC, touring the Prince George campus and training at the Northern Sport Centre. His time practicing with the current Timberwolves roster was important in his decision to commit to the green and gold for his university soccer career.

“Everyone is super friendly here. I was shocked. I didn’t know if they would let a total stranger come in. They’re just so friendly with newcomers. I love this place. The indoor facility, when I first came in here with Steve, it just amazed me. Especially the track around the Sport Centre. It is really cool, and obviously the indoor pitch is really great.”

Set to graduate from Reynolds Secondary in June, Muellerleile will leave a school and program that he helped win a pair of Provincial championships with coach JJ Atterbury. He plans to enroll in UNBC’s Bachelor of Arts program, and join his new teammates in August for training camp, where he will take another step playing the game he has loved since he was seven years old.

“You’re always around this group of 18 to 22 players, just hanging out and getting to know them. Playing soccer with them and doing what you love doing the most with guys you may know your entire life. Obviously, the feeling of winning a soccer game is always great. But having teammates you can bond with and have a great relationship is one of the reasons I love playing soccer so much.”