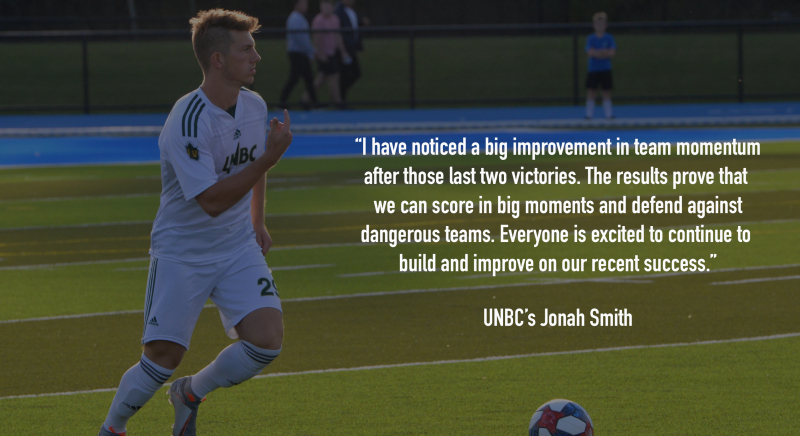 Player to watch: Hussein Behery, F/M
Behery has been a tremendous addition to the Timberwolves roster, arriving this season after three years with the Vancouver Island University Mariners. A tricky, intelligent player with the ball at his feet, the native of Cairo, Egypt is at his best when he is applying pressure and putting defenders on their back foot.

Player to watch: Lahai Mansaray, F
A dynamic forward with speed and pace, Mansaray is the straw that stirs the drink for the Golden Bears’ offensive approach. A transfer from MacEwan University, the five-foot-ten veteran leads Alberta in points and will command plenty of attention from the TWolves backline.

Player to watch: Anthony Preston, M
The Prince George product has been asserting himself with great success lately, as Coach Steve Simonson has used him all over the park. A relentless athlete, UNBC leans on the second-year to win battles, and make intelligent plays with the ball at his feet. He will need to be influential for the TWolves to have success against MacEwan.

Player to watch: Everett Orgnero, F
The second-year forward is a handful for most Canada West defenders, standing six-foot-five. A Calgary product, Orgnero scored eight goals as a freshman for the Griffins in 2018, earning a spot on the conference All-Rookie team. TWolves centre back Demian Dron (also six-foot-five) will try to contain the talented striker.

On the matchup with the Golden Bears…
“Our mindset going into the Alberta game should be the same as it has been all year; go out and try to put a great performance on the field. We understand that the result is ultimately out of our control. The results against Victoria and MRU show the strength of the team's collective mindset, and our ability to thrive in adversity.”

On the matchup with the Griffins…
“MacEwan is a good team and we are expecting a strong performance from them. They are always well organized, and have some really good athletes. We have to prepare well and ensure we take care of the details.”

On momentum coming off two big wins…
“Absolutely, I have definitely noticed an improvement in team momentum after the last two wins.  The results prove that we can score in big moments and defend against dangerous teams. Everyone is excited to continue to build and improve on our recent success.”

On main factors of the team’s offensive success as of late…
“Overall, I think we have been dangerous going forward all year. Our attackers have done a great job of creating excellent chances in each game. The difference recently is that we are capitalizing on them. In addition, I have noticed that the attackers are developing strong chemistry with one another. This comfort has allowed them to play free, which has certainly been an important factor in the recent influx of goals.”