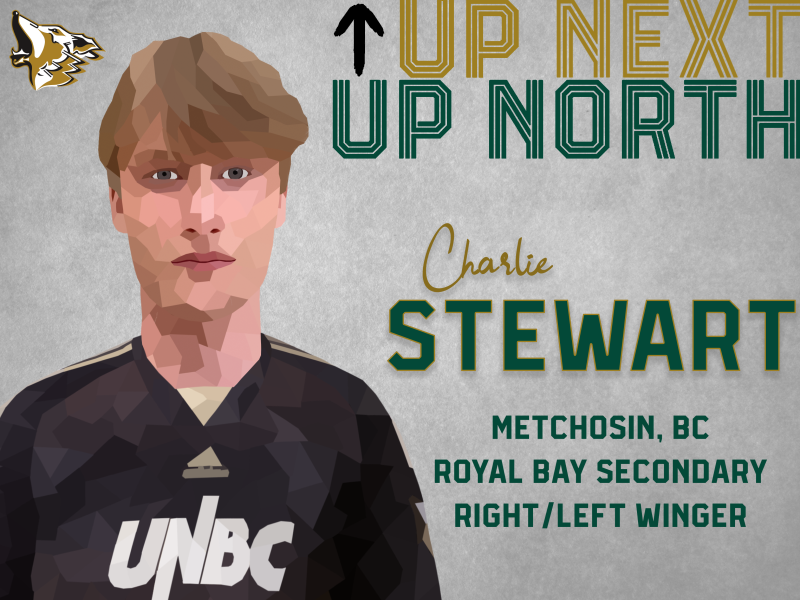 The goal when building a varsity athletics program is to add quality athletes who are, most importantly, quality people, and the University of Northern British Columbia Men’s Soccer team has done that today. The Timberwolves are excited to officially announce the commitment of Vancouver Island product Charlie Stewart for the upcoming 2022 Canada West season, and beyond.

“I am really excited to take that next step and play at the highest level in Canada, and to play on a really great team. They’re really good guys with a really good coach. I am excited to make that jump and I am really honoured to have this spot. I am most excited to play for the Timberwolves. It is a pretty cool next step.”

Stewart, a long and dynamic winger, made the trip to UNBC’s Prince George campus for a visit this Spring, where he was able to tour the facilities and train with the Timberwolves. The time spent with the green and gold was enough to solidify the decision that Northern BC was the place for him.

“What really stood out to me during my trip was how nice everyone was. I met the President and he is a huge fan, and I met some teachers who were like ‘Go Timberwolves,’ so that was pretty cool. It’s a big community around the soccer team. Everything is so close at the University. It’s walking distance to everything, whether it is to the training centre, ot to the residence building, everything is really close.”

While perhaps an unfamiliar name to Timberwolves fans, the 17-year-old has plenty of connections to UNBC Men’s Soccer. Stewart has trained for a number of years under TWolves head coach Steve Simonson, and even plays for the Vancouver Island Wave program for coach Sonny Pawar – the former UNBC varsity coach that helped the Timberwolves program through its early college years and into the Canada West level. UNBC’s roster has no shortage of Vancouver Island talent, so joining the program felt natural for Stewart.

“Steve is probably one of the biggest reasons why I chose UNBC. He has coached me since I was young and he has really influenced the way I play soccer today. I want to move forward playing under Steve. When I was in Prince George, I instantly felt like I was at home with all the guys. I knew Cody (Gysbers) through EPIC, so I had that connection. Meeting all the guys, they were so friendly. I really like the program and the vibe it gives off.”

For Simonson, it was a no-brainer to add an athlete and person like Stewart to his roster. The six-foot-one athlete can play left or right wing, and possesses an intentional, attacking mindset with or without the ball at his feet. When the opportunity to sign the Metchosin product, Simonson knew he would be committing to a talented player with a hunger to get better with every training session.

“I am really thrilled today, for the Timberwolves and for Charlie. Charlie made a great impression on the team during his visit to UNBC. He is a truly dynamic wide player who has the ability to impact the game with his attacking prowess.  I have seen him develop over the years in his youth environment and I think his best years are ahead of him. He has all the makings of a player who will make a great impact for us for years to come. We are really looking forward to having Charlie join us this fall.”

An impact player for Dan Cummings’ Royal Bay Secondary team, Stewart acknowledges he will have some adjusting to do when he suits up at the highest level of university sport in the country. However, he is eager to make that leap, and gave the UNBC fans a scouting report of what they can expect from him on the pitch for the next five years.

“I think it is going to be a big physical adjustment. Some of these guys are five years older than me, so the pace is going to be different. A lot quicker and a lot more technical, but I think it’s going to be good. You can expect me to really hard working out there. Giving it my all. Trying to get forward and get at defenders. I am a fast winger, so I will try to get those balls into the box. Get some assists, hopefully score some goals. Long-term, my goal is to become a starter and make an impact every time I play for UNBC. Wear those colours proud.”

Set to graduate from RBSS in June, the honour roll student will enroll in UNBC’s Nature-Based Tourism program this fall. Before he ever steps foot in a post-secondary school classroom, he will join his new teammates for training camp in August, and continue a soccer journey he started when he was just four years old.

“The biggest thing in my life is soccer. I am always training, always on the pitch with my friends, always doing something related to soccer. If I have nothing to do, I will go outside and juggle the ball. I love having a ball at my feet. I love the game and love being around all aspects of it.”