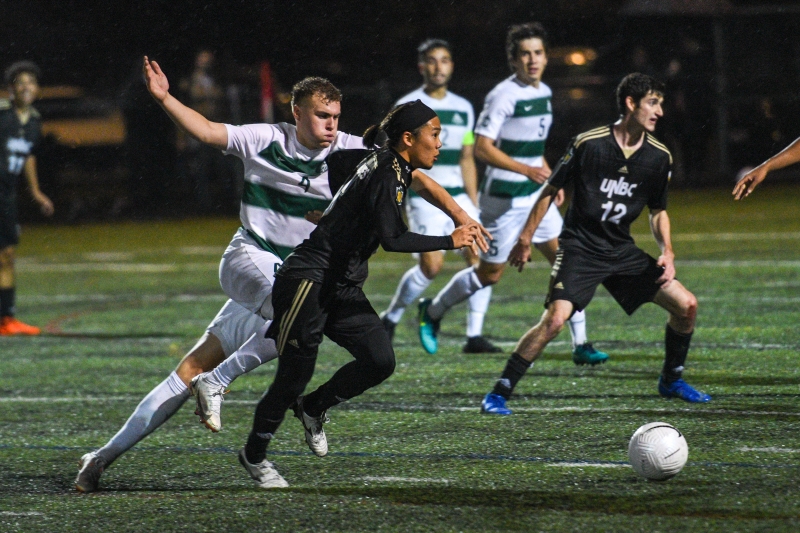 The UNBC Timberwolves found a higher gear in the final 45 minutes, coming back from a 2-0 second-half deficit, but had to settle for a 2-2 draw with the UFV Cascades on Friday, October 15th in Abbotsford.

In the 19th minute, the Cascades got on the board. Off a free kick and ensuing Trevor Zanatta header, Tobias Spiess was in close to deposit off a rebound, making it 1-0 for the home side. The assist marked the 5th of the season for Zanatta, which leads the conference.

Minutes later, the TWolves nearly equalized. Michael Henman was sent in all alone, but his low shot was stopped by Jackson Cowx. It looked like a Cascades defender took down Henman before he could take an attempt at the rebound, but it was Henman called for the foul.

In the 38th minute, off a free kick it was the Cascades doubling their advantage. A ball was sent in by Manpal Brar and created a mild scramble in the box. It found Zanatta, who quickly turned and put it on net, bouncing it off UNBC keeper Daniel Zadravec and in to make it 2-0.

Three minutes later, UNBC found the sheet. Kensho Ando sent a beautiful ball into the box, finding a glancing touch from Henman who angled it perfectly past Cowx to cut the lead in half. The goal marked Henman's fourth point in two games.

At halftime, the shots favoured the Cascades by a 6-5 margin.

“It is tough because I think, in some ways, the first half was reflective of our season,” said UNBC coach Steve Simonson. “We were in on the goaltender four times, on breakaways, but don’t score. We dug ourselves a hole. They are fantastic on set pieces, which we knew they would be. They scored their goals in areas we knew would struggle at. Full credit to them.”

In the second half, the Timberwolves turned up the pressure, realizing their season hung in the balance. UNBC caused some chaos in the UFV third, leading to some opportunities for Henman, Hussein Behery, and Ando. However, the Cascades held off their attack, keeping the lead into the late stages.

The home side did generate some pressure, earning some looks on target from Will Bundy, Ryan Donald, and Manpaul Brar, but nothing found the back of the net.

In the 81st minute, the Timberwolves got the ball deep into the box where it looked to go off the hand of a UFV defender, bouncing out of trouble. The UNBC side voiced their thoughts on the call, but play resumed.

Then in the 87th minute, Henman gathered the ball on the wing and dribbled his way into the box where he was hauled down. The referee pointed to the spot, awarding the Timberwolves a penalty kick.

Cody Gysbers, returning to action after missing five games, stepped up and made no mistake. The veteran defender blasted it past Cowx, knotting it 2-2 with his second of the game.

“We tell our guys, if there is time on the clock, we are going to keep going,” said Simonson, postgame. “That has been our mantra all year. I don’t like having to dig ourselves out of a hole, but we managed to do it.”

UNBC had full control of the momentum as the clock ticked away, and had a number of near-misses late in the match, but couldn’t find the go-ahead goal. When the referee blew the final whistle, the Timberwolves looked the more disappointed side in the result.

The teams will meet again on Sunday, in Abbotsford.