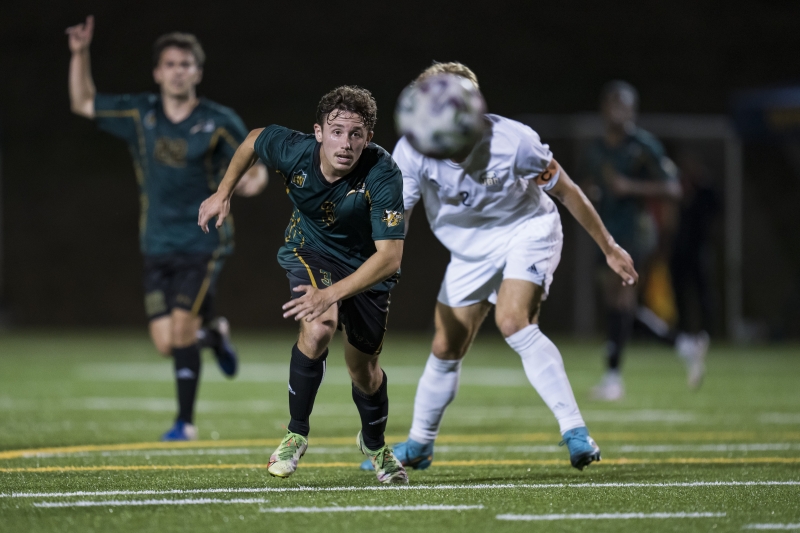 Coming off a tremendous 2-1 road win over the Nationally-ranked UBC Thunderbirds, the UNBC Timberwolves dug deep and earned a four-point weekend with an incredibly hard-fought 0-0 draw with the T-Birds on Saturday, October 1st, 2022 in Vancouver, BC.

With regular starters Michael Henman, Cody Gysbers, Gregor Smith, Abou Cisse, and Anthony Preston on the bench, Steve Simonson’s side came out looking to defend and counter against a dangerous UBC team.

The Thunderbirds were happy to possess and look to attack, finding opportunities off the feet of Connor Mrazek, Tristan Nkoghe, and Asvin Chauhan, but Daniel Zadravec did well to keep the sheet clean in the early going.

In the 40th minute, the T-Birds nearly got on the board off a corner kick that led to a bouncing ball at the top of the box. Logan Chung found it and put a heavy foot on it, but Zadravec made an athletic diving save to his right, knocking the ball over the crossbar to keep it 0-0.

At halftime, the game remained scoreless, despite a sound advantage in shots and possession for the Thunderbirds.

UNBC continued to be great defensively as the second half began, showing their mettle in every battle for the ball. Kayden Miner, Hagon Kim, and Julian Daduica dug deep time after time, getting to the 60th minute at nil-nil.

Steve Simonson, sensing an opportunity to generate an attack, subbed in Henman, Smith, and Cisse, looking to create some offense in the T-Birds third. In the 64th minute, UNBC thought they had struck first when Gregor Smith was sent in on a break, squeaking his low shot under UBC keeper Axel Thulin Lennselius. The ball trickled towards goal, seeming to cross the line, but the linesman ruled it no goal.

After proving happy to defend for the first hour, the TWolves proved to be the more assertive side after Simonson’s substitutions. Henman nearly finished from inside the box but a Loic Benquet pass just eluded him as he ran in unmarked in the 75th minute.

In added time, the teams traded pressure and opportunities, until the Thunderbirds created a rush that nearly blemished Zadravec’s banner night. Nicholas Momotani was sprung n a run in the box, had a good look, but the UNBC keeper did well to swallow up the low shot.

Eventually the referee blew his whistle, and the Timberwolves earned a 0-0 draw with the Nationally-ranked Thunderbirds.