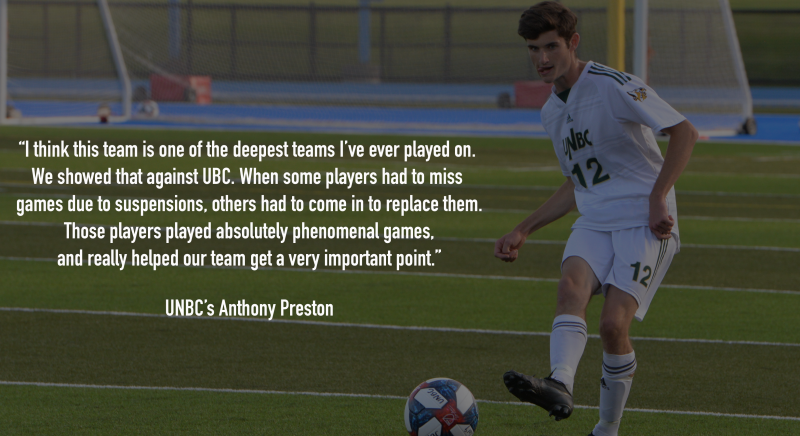 Player to watch: Jonah Smith, D
A fourth-year Timberwolf, Smith has made the transition to defence this year, and has been tremendous for UNBC all season long. A compact, strong athlete, Smith has provided leadership and steady play for a TWolves squad that dresses a number of freshmen on the backline. He will need to be solid against a very dynamic Spartans side.

Player to watch: Cody Fransen, F
Standing six-foot-five, Fransen is a handful for every backline in the conference. Coming off a four-goal weekend that saw him earn Canada West and U SPORTS Player of the Week honour, the fifth-year forward will command plenty of attention from a young group of TWolves defenders.

On the team mood after the games vs UBC…
“The feel in the locker room is great. The boys put together a great performance against a really good team last weekend, and we are looking forward to keeping that momentum going into the final two remaining weekends.”

On depth and versatility of the roster…
“I think that this team is one of the deepest teams I’ve ever played on. We showed that against UBC, when some players had to miss games due to suspensions, others had to come in to replace them. Those players played absolutely phenomenal games, and really helped our team get a very important point.”

On the matchup with the Spartans…
“Trinity is a very good team and has been playing good soccer all season. Every year, they are so dangerous and so dynamic. But we have played them well in the past, and we know we need to do it again. This is a massive matchup for us, and for them, so we expect their best.”

On the way the standings are currently sitting…
“A this stage in the season, we are sitting right on the cusp of playoffs in the standings and we feel optimistic that we can win one, if not both games against Trinity. Hopefully, we then close out the season with a six-point weekend against TRU to make that last push for playoffs.”