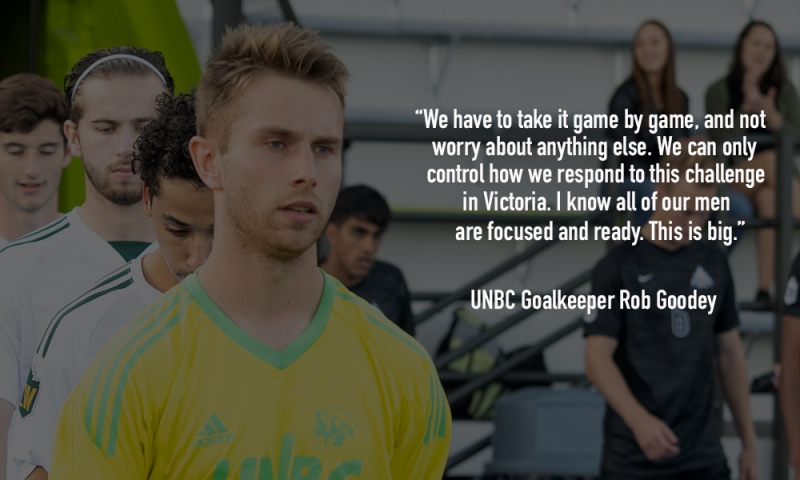 Player to Watch: Rob Goodey, GK
One of the most technically gifted shot stoppers in the conference, Goodey is a veteran presence behind a backline that is short on experience. Among the 2018 Canada West leaders in saves, save percentage, and shutouts, the Langley product will have to steady the troops; particularly in the Thunderfest environment.

Player to Watch: Isaac Koch, M
Isaach Koch, returning from a year missed due to injury, has asserted himself in the early parts of the Canada West season. The West Kelowna product leads the Vikes in assists and points, as much of Victoria’s play and distribution goes through the 4th-year. The TWolves will need to slow the former Canada West First Team All-Star.

On regrouping this week, to prepare for upcoming matches…
“Obviously the results were very disappointing from a score line standpoint as well as the fact they were settled by a call beyond our control. However, the way we took the games to a team who can beat anyone on their day as noticed last season finishing 4th in Canada West was amazing. The game on Friday was probably the best I have seen us play in all my time here. The team is clicking, more and more, game by game and that is very promising.”

On the matchup with the Vikes…
“The games in Victoria are exciting for two reasons. The first being that we are part of Thunderfest once more (3rd time in 6 years) and I have seen us win it there before. I would love to be able to do it again. Secondly, we have a large contingent of boys from the Island so it will be great for them to play in front of their families and hometown friends. That can be an amazing motivator, but the games won’t be easy. They are coming off two defeats where they have conceded 8 goals and I know they will be out for revenge. If we get them on the back foot early on, they will begin to doubt themselves which will give us a distinct advantage.”

On young players’ contributions thus far…
“The new boys have been fantastic! Even though it highlights the fact I am six years their senior. They have been welcomed into the squad with open arms and have contributed to our successes both on and off the pitch. We are a team that lacks size, but we make up for it significantly with our level of skill. The new boys have that in abundance and they will only get better.”

On how a short season plays a part in this upcoming weekend…
“Again, the results were not what we wanted but if we think like it was "make or break" for playoffs then we have already lost. We have to take it game by game and only focus on the next one, while not worrying what is happening elsewhere. The results this weekend are now out of our control, but what we can control is how we respond in Victoria. I know all the boys are focused and ready for the challenge ahead.”