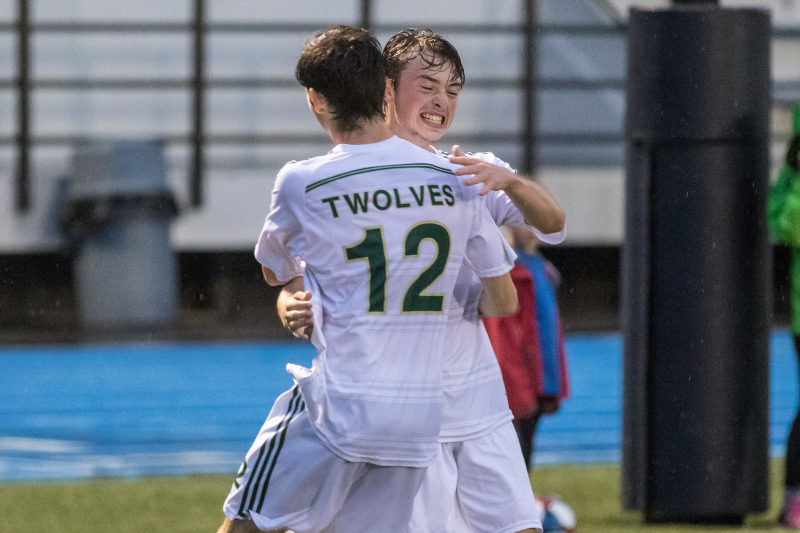 The University of Northern British Columbia Men’s Soccer team welcomed the hottest team in Canada West to town, and matched them every step of the way, edging the previously unbeaten Mount Royal University Cougars 3-2 on a rainy September 13th, evening in Prince George, B.C.

With the skies opening up not enough to dissuade the 600 UNBC fans in attendance from supporting their Timberwolves, both sides traded chances early in this matchup. Anthony Preston had a great opportunity off a Reid Adams cross into the box early on, and the Cougars nearly got on the board when Dawid Dudek chipped TWolves keeper Rob Goodey, but it rolled just wide of the post.

In the 30th minute, the home side drew first blood. Jonah Smith sent Owen Stewart on a run into the MRU box, and when the PG product tried to center it, it deflected off a Cougars defender and past a helpless Kyran Valley. The goal was the first of Stewart’s season, but his third point in two games.

“It’s clicking right now. I am slowing my game down a little bit and focusing on my game,” said Stewart, postgame. “It’s just trust. I know the guys are going to be running and looking to score. It is starting to click and it feels amazing.

MRU responded by applying significant pressure to the TWolves, forcing turnovers that led to opportunities for Mohamed El Gandour and Tysen Chatani, but Goodey was up to the task. In minute 36, a scramble led to Dane Domic playing it through Goodey’s crease to a wide-open Dudek who potted his first of the campaign. Shots were 7-6 in favour of MRU after 45 minutes.

Just one minute into the half, the Cougars showed why they came into the match at 5-0-0. Domic took a pass at the top of the box and beat an outstretched Goodey with a low shot inside the post. That goal was the 4th of the season for the freshman, giving MRU a one-goal lead.

However, the TWolves refused to lay down for the higher-seeded side, pushing for an equalizer. In the 56th minute, Kensho Ando sent a gorgeous corner kick into the box, finding the foot of Stu Rowlands. The veteran forward beat Valley for his third goal in two games, much to the delight of the UNBC faithful.

But the scrappy Timberwolves weren’t done. In the 69th minute, Stewart would find Preston at the top of the box after an MRU turnover. The second-year Prince George product would fake a shot, sending a Cougars’ defender sprawling, before firing one top corner to make it 3-2 in favour of UNBC.

“I had missed a couple earlier in the game, and I was kicking myself,” said Preston. “Owen found me perfectly and I was in on goal. I knew if I faked a shot, the guy was probably going for it. I cut inside, and the it was just me doing what I have been practicing on my own. When it went in, it was an unbelievable feeling.”

In added time, the Cougars looking to equalize, and they came within inches. From 20 yards out, Benedikt Mehl sent a ball towards the top corner, but Goodey made a miraculous diving save to poke it out of play, preserving the lead, and ultimately the game for the Timberwolves.

“Massive. An unbelievable hand,” said Stewart, about his goalkeeper. “He does it every single day in training, and he does it tonight in the biggest game. Top notch.”

With the win, the TWolves improve to 3-3-1 on the season, while the Cougars suffer their first defeat of the season, falling to 5-1-0.

“For us, it’s bitter to lose on an own goal, a corner kick, and a stupid error, but that stuff happens in games,” said Gyaki. “It was enjoyable to see two teams try to impose their will on eachother. The last 30 were a battle in the rain on a beautiful field on a great night for football. Just didn’t get the bounces today.”