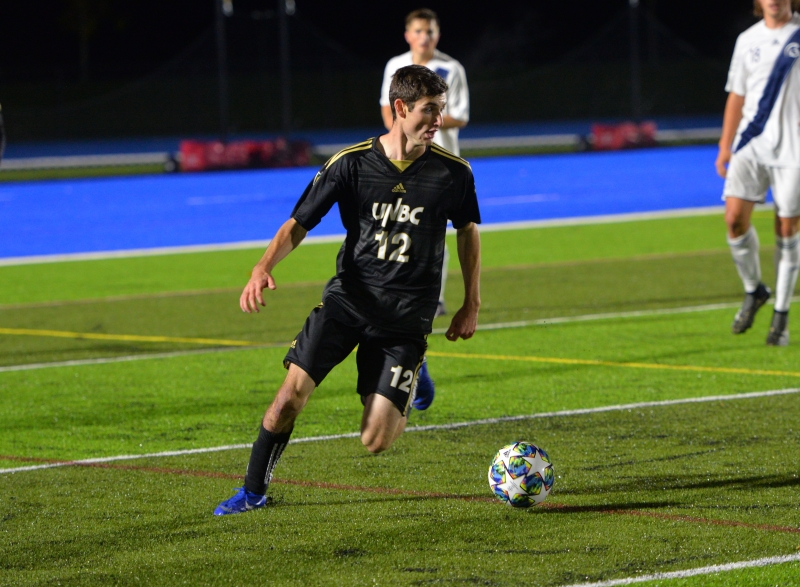 The UNBC Timberwolves had more than enough grade-A scoring opportunities to earn a victory. Instead, they didn’t convert any of their quality looks and found themselves on the losing end of a 3-0 game with the Trinity Western Spartans, on Saturday, September 18th in Prince George.

However, it was the visitors that struck first. Pouncing on a Timberwolves turnover in their own third, TWU’s Soren Di Sabatino made no mistake, neatly finishing past UNBC goalkeeper Daniel Zadravec.

“We knew they were fired up from yesterday, and we obviously wanted a little bit more from yesterday, so we knew we had to match them,” said Colyn. “Just putting everything on the line, every 50-50, we had that mindset that we wanted to come out on top, no matter what.”

That marker swung momentum fully in favour of the Spartans, who put the TWolves on their heels. At the 30-minute mark, Christian Rossi gathered the ball at the top of the Timberwolves box, dribbled to find time and space, and beat Zadravec with a shot labeled into the low corner, doubling the Trinity advantage.

That woke UNBC, who tilted the pitch and found their footing. A foul in the TWU box meant the Timberwolves would have a penalty kick opportunity, and Henman stepped up to the spot. Colyn was up to the task, however, swallowing up Henman’s shot, keeping it a 2-0 game.

“That energy they brought in those twenty minutes, to score those two goals. They pounced on us,” said UNBC’s Owen Stewart. “We didn’t have a reaction for it, which is disappointing for us, because I think we have the group to have a reaction. It is something we can’t get thrown off by, because every team is going to want to bring it like that. So we keep that in the bank and we move forward.”

Henman would get one more opportunity in the half, as Hussein Behery sent a beautiful ball to the far post where Henman found it with his right foot. The powerful forward couldn’t believe his misfortune as it glanced off his foot, and UNBC went into the half trailing the Spartans 2-nil.

In the second half, the Timberwolves found another gear, generating chance after chance seeking a goal that would draw them closer in front of a supportive crowd in Prince George.

Abou Cisse, Hussein Behery, and Owen Stewart had quality looks, but it was the snake bitten Henman who had the best chance, yet again. Late in the match, Henman streaked in and beat Colyn, sending a ball that appeared to be destined for the goal. However, the post had other ideas, and UNBC watched helplessly as another shot stayed out.

The Spartans again seized momentum off a missed chance at the other end, as Jackson Thomson was sprung on a run before finding Di Sabatino with a cross in the box, who made it 3-nil.

“This felt really good, especially after a weekend prior where we drew both,” said Colyn, postgame. “Definitely getting the monkey off our back and moving forward. We hope to keep the momentum going from here.”

When the referee blew the whistle, the scoreboard stated 3-0, but it certainly felt more contested than that to everyone in attendance. With the victory, Trinity remained undefeated, but claimed their first victory of the year, moving to 1-0-3. UNBC falls to 0-2-2.

“The boys, mentally, are going to be okay. I think it is just that finishing touch,” said Stewart. “As soon as we find that, I think we are going to be a scary group to face. I think that is coming. I hope it comes next weekend. I think it will. I believe in this group, and we will keep moving forward.”