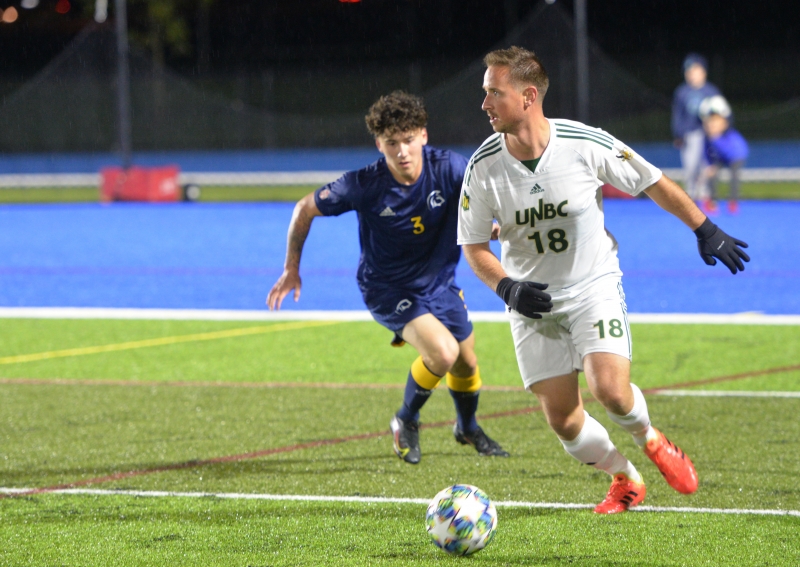 The UNBC Timberwolves are getting their chances. It’s the finishing those chances and putting balls in the net that seems to be the missing piece. On a frustrating Friday night in Vancouver, the TWolves fell 1-0 to the reigning Canada West champion UBC Thunderbirds to remain winless on the season.

Through the early going, both sides earned some moderate opportunities to open the scoring. The Timberwolves earned a free kick from just outside the box, but the ensuring ball was cleared out of trouble. At the other end, Tristan Nkoghe was threatening on a pair of looks, heading his best opportunity wide.

UBC’s Canada West All-Star Victory Shumbusho found himself on the end of a pair of scoring opportunities, but both were thwarted by UNBC’s Daniel Zadravec in the opening 30 minutes.

In the 39th minute, UBC got on the sheet. On a free kick, Nick Fussell sent the ball into the box, over the head of Zadravec onto the head of his teammate Ngoghe. The big striker made no mistake, making it 1-0 with his first as a Thunderbird.

Early in the second frame, the Timberwolves came out the more intentional side, pressuring the Thunderbirds and earning some runs that were threatening. UBC did well to hold off close calls from Hussein Behery and Michael Henman, however, and the sheet remained clean.

Henman was awarded a free kick in the 52nd minute just feet outside the box, and gave it a good run with a blast from the right side that forced T-Birds keeper Bennett McKay to dive to his left for a good stop to keep it 1-0.

“We wanted to continue our first half pressure, and build on that. We decided to press more and bring the game to them more aggressively,” said UNBC Dom Parris. “We brought some fresh bodies on and that was helpful. We were definitely playing better.”

The TWolves continued to be the better side in the second half, with substitutes Dom Parris and Stu Rowlands both coming incredibly close with chances to beat McKay, but the UBC keeper stood tall heading into the final ten minutes of the match.

Despite controlling much of the possession and likely deserving a better result, again it was the lack of the final finish that plagued the Timberwolves. When the final whistle was blown, UBC earned the 1-nil victory, to improve to 1-0-2 on the season.

The Timberwolves, despite their best efforts, fell to 0-3-2 on the campaign.

“It is very frustrating. We have had so many close games. We are almost there and then we come up just short,” said Parris, postgame. “We need to keep pushing. Not being able to come up with anything when you do so many things right. Just little things that could go a long way.”

The two teams will clash again on Saturday, September 25th in Vancouver.

“We know how they play so we are looking to take advantage of some things, but they’re obviously a good team,” said Parris. “We need to do our thing, and with a bit of a luck, we could have results going our way. We just need to not abandon what we do, and things will break for us.”