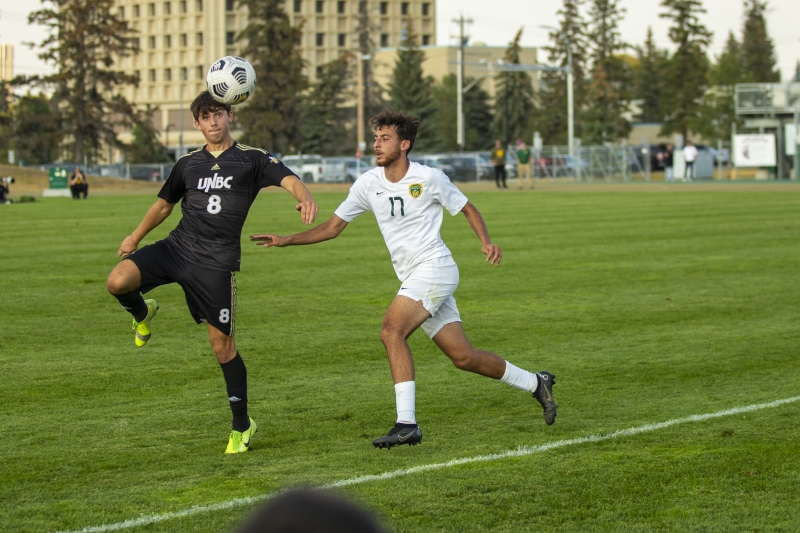 The UNBC Timberwolves dug themselves a three-goal deficit in the first half, turned on the pressure in the second half, but had to settle for a disappointing 4-1 loss to the Alberta Golden Bears on Friday, September 16th, 2022 in Edmonton.

It took less than two minutes for the host Bears to get on the sheet. Habib Assem gathered a loose ball, turned, and beat Zadravec with a low shot to the bottom right corner. The Timberwolves contested that Assem was offside, but the officials disagreed, and Alberta found themselves up 1-0 on Hassem’s third of the year.

Ten minutes later, more from Assem and the Golden Bears. An apparent miscommunication by the TWolves in the defensive third left the forward wide open, and he made no mistake doubling the lead for the home side, from inside the box past a helpless Zadravec.

The nightmare half continued for Steve Simonson’s side, when Assem intercepted a ball just inside the UNBC half, took space, and beat Zadravec with a blast from 20 yards out before the defenders could converge on him. The third goal marked Assem’s first career Canada West hat trick.

To open the second half, the Timberwolves picked up the pressure, earning free kicks and corners early on, but they failed to capitalize on some sustained possession and intent. Abou Cisse had a good look from the top of the box, while Gregor Smith and Anthony Preston looked assertive in attack, but the Bears did enough to keep the sheet clean.

UNBC continued to control play, hemming the Bears into their own third and creating chaos around the Alberta net. In the 70th minute, the visitors thought they had broken the goose egg as Hagon Kim labeled a header, but Alberta keeper Chris Ezoua dove to his left to make the save.

Minutes later, the Timberwolves were finally rewarded for their tremendous half. Koby Greaves went on a run, slipping through the defense and finding freshman substitute Charlie Stewart who tapped it past Ezoua and into the net. The goal, Stewart’s first of his Canada West career, drew UNBC to within two goals in minute 74.

The TWolves continued to apply pressure as Simonson utilized his full bench, substituting Tora Omori, Trevor Scott, Noah Ballinger, and Julian Daduica into the game, alongside the aforementioned Stewart.

The Golden Bears would score a goal in counter late in the match, earning a 4-1 victory, despite a very strong second half by the Timberwolves. UNBC outshot the Bears 9-3 in the half, but weren’t tactical enough to cut significantly into the deficit.

With the victory, Alberta improves to 2-0-4 on the campaign, while the TWolves fall to 2-4-1. UNBC now travels south to Lethbridge to take on the Pronghorns on Sunday.