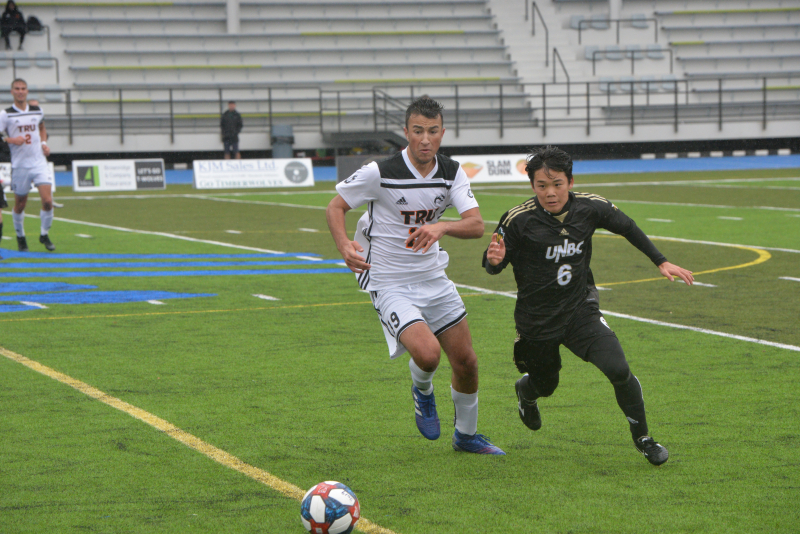 The Thompson Rivers University WolfPack needed a victory to keep their Canada West hopes alive, and they did just enough, topping a game University of Northern British Columbia Timberwolves side 2-0 on Sunday, October 20th, in Prince George, B.C.

In rainy and cold conditions, it was the Timberwolves, who had been eliminated from playoff contention a day earlier, who came out the more assertive side. Owen Stewart and Kensho Ando had chances in the opening twenty minutes, but WolfPack keeper Jackson Gardner did well to turn them aside.

“We definitely felt like we had them on the ropes there,” said Timberwolves veteran Aidan Way. “They weren’t able to get it past half, and we were whipping it back in, over and over. At the end of the day, we didn’t put it in, and that’s what you have to do.”

In minute 31, it was the visitors who got on the sheet to open the scoring. Off a Marco Favaro free kick from thirty yards out, Dylan Hooper was able to convert it past UNBC goalkeeper Daniel Zadravec for his third of the campaign.

“When they scored off that set piece, I thought how are we down one-nothing,” said UNBC coach Steve Simonson. “But, credit to those guys. They score their chances. They defended well, and it is so tough for us to score.”

In the second half, the Timberwolves came out firing in the first twenty-five minutes, hemming the Pack into their own third. Stewart had his header off a Reid Adams ball just sail over the crossbar, while Anthony Preston and Alex Nielson had opportunities but couldn’t beat Gardner.

“In my opinion, Jackson is one of the best goalkeepers in all of U SPORTS,” said Hooper. “He consistently makes big saves for us and keeps us organized in the back. Cheers to him.”

TRU did push back, testing Zadravec with some stellar opportunities of their own. Jan Pirretas Glasmacher had his shot turned away by the freshman keeper, as did Hooper; that save needing a diving effort from the Victoria product.

In the 82nd minute, the Timberwolves were burned by the same fire they had played with a day earlier; a foul was called in the box as TRU’s Justin Donaldson worked his way into a scoring area, meaning the Pack were awarded a penalty kick. The fifth-year Donaldson stepped to the spot and converted past Zadravec for his fifth of the season.

From there, the WolfPack knew they were in the driver’s seat and were content playing out the clock, earning a 2-0 victory over a gritty Timberwolves team that made the visitors work for every inch.

“They’re a physical team and they’re going to work for every single ball,” said Way. “They do their best at every single moment of every game.”

A highlight of the match was in the 86th minute when graduating senior Johnathan Botelho was subbed into the game for UNBC; the first game action of his Timberwolves career.

“Johnny has never once complained about his role on this team. He has come in and given to this team,” said Simonson, postgame. “He went on, and I was really happy for that kid. He will be greatly missed by his teammates.”

With their victory, coupled with a UFV Cascades loss to the UBC Thunderbirds, the WolfPack hurdle the Cascades and UBCO Heat for the fourth and final spot in the Canada West playoff bracket.

“It wasn’t pretty today. It was another battle with UNBC, and they out us under a lot of pressure,” said TRU coach John Antulov. “Our older guys really led the way. Justin Donaldson, Jan Pirretas Glasmacher, Josh Banton, Adam Swanson; they led the group and played really strongly.”