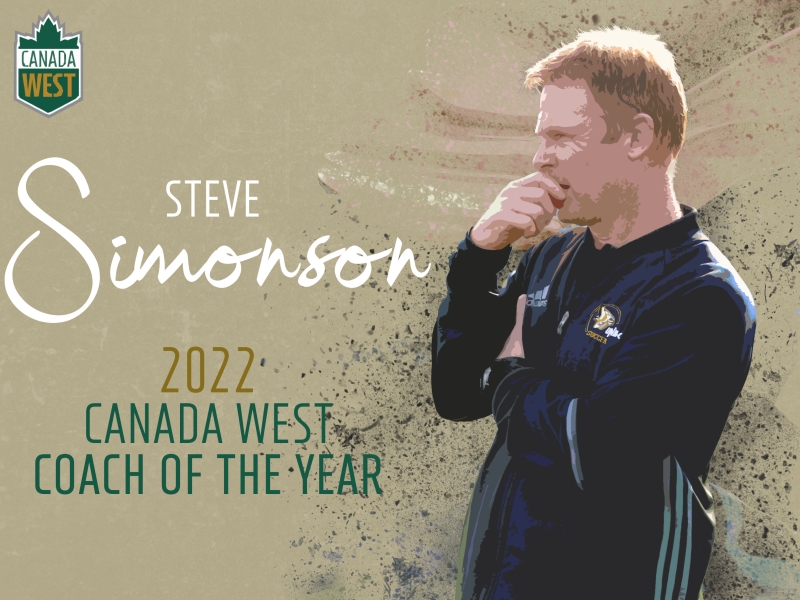 It was a historic season for UNBC Men's Soccer, and it is being rewarded in a historic way. Today, Steve Simonson became the first University of Northern British Columbia coach to be honoured by the conference, earning 2022 Canada West Men's Soccer Coach of the Year.

COACH OF THE YEAR: Steve Simonson
​Team: UNBC Timberwolves
​Year: Eighth
​
UNBC's Steve Simonson has been named the 2022 Coach of the Year as he helped transform a Timberwolves program into a serious conference contender.
Simsonson's team finished with an 8-5-3 record, good for third in the Pacific Division after recording just two wins a season ago. He guided the T-Wolves to a strong second half, as they went on an eight game win streak to position themselves in the conference playoffs.
Simsonson helped his team capture the UNBC record for wins, goals scored and points. He fixed the ship despite a slew of injuries throughout the season, creating a culture of passion and determination for his squad.
“We are incredibly thrilled for Steve, with the announcement of his well-deserved Canada West Coach of the Year honour. He was worked extremely hard establishing a team culture, creating an environment where the players are accountable, with a focus on them becoming better players, better students, and better people. He has stayed true to that with his efforts recruiting, coaching, and time spent on his professional and person development. I am so proud of Steve. It is special to be recognized by your colleagues from other institutions. His passions go beyond the win/loss column, and his team’s success on and off the pitch are evidence of that passion and drive.”
​-Loralyn Murdoch, Athletic Director, UNBC Timberwolves