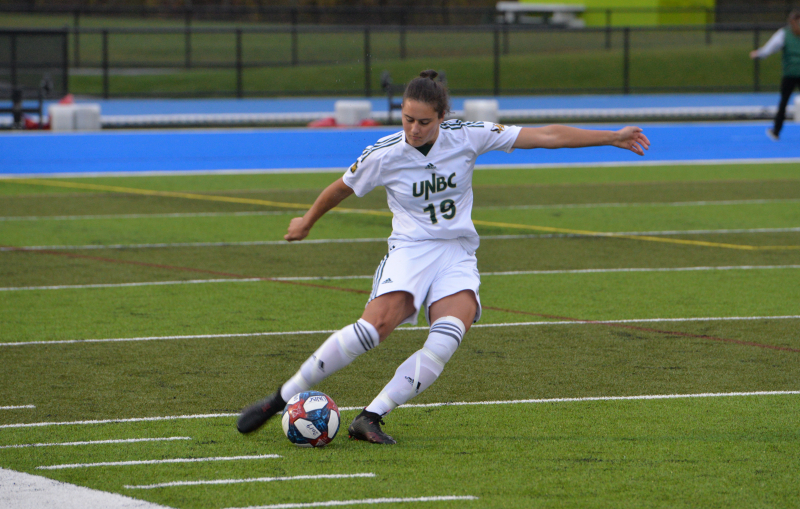 Rob Goodey has long had the respect of his teammates, but now he has been recognized by the conference for his stellar performance between the pipes. The veteran keeper has been named a Canada West 2nd Team All-Star for his tremendous season for UNBC Men’s Soccer.

The Langley product, who spent four years as a backup before getting his opportunity as the TWolves starter, was sensational this year. His numbers match up with the best keepers in the conference, but it was his leadership and timely saves that made the difference for a UNBC team that lost ten players to graduation last season.

Goodey is the first goalkeeper in Timberwolves history to be named a conference all-star.

“Rob is a very deserving recipient and an inspiration to young goalkeepers. His time here wasn’t all roses. He had to sit in the shadows of former goalkeepers, all the while he just kept working and giving his best every day,” said UNBC coach Steve Simonson. “He has been an incredible teammate and is now getting his just rewards for all of the time and effort he has put into this game”.

It isn’t often that a first-year player comes in and immediately provides a massive spark for his team. Reid Adams was no ordinary player for the UNBC Men’s Soccer team this season, and has been recognized by the conference as a member of the Canada West All-Rookie Team.

The product of Victoria started 13 of the 15 games for the TWolves, providing incredible speed and creativity, while also proving to be a steady presence on the defensive end. Adams was a focal point for UNBC, creating headaches for backlines across the conference.

Adams is the first UNBC soccer player to be named to the Canada West All-Rookie Team.

“Reid has been such a great part of this team this season. We are so happy that he chose to come to UNBC, and I know he will be a massive part of our program for a long time,” said Simonson. “He has been a quality player on the field, but also an incredible piece of our chemistry. I am very proud of what he has done in such a short time.”

In her four seasons in Canada West, UNBC Women’s Soccer’s Mara McCleary has established herself as one of the finest defenders in the entire conference, and now, she is being recognized as just that.

Today, McCleary was named a Canada West 2nd Team All-Star for her tremendous season anchoring the Timberwolves backline. The TWolves set a new program record, allowing just 19 goals; down from 31 in 2018-2019. The Victoria product played a major role in that continued improvement, as she asserted herself against the opposition’s best players on a daily basis.

“Mara has been a top performer in our program and in Canada West since she arrived here at UNBC,” said Timberwolves coach Neil Sedgwick. “It is wonderful that she has received this recognition for her focus and her effort. Mara deserves this. She has been a major part of the program’s growth and success, and I am thrilled for her.”

McCleary began her TWolves career in 2016-2017, and has earned the team’s “Best Defensive Player Award” every season. Additionally, she has started every game of her UNBC career.

The UNBC Women’s Soccer team has been awarded the 2019 Canada West Fair Play Award, given to the team that garners the least cards throughout the season. The Timberwolves were given just three yellow cards, and no red cards, throughout the year.

“We have conceded fewer goals than previous years, yet we have had very little discipline issues. This says a lot for what the players do physically, and mentally,” said Sedgwick. “It is a sign of good defending positions and commitment, but also to their focus on their actions, rather than other external factors in the game. I am hugely proud of the team for this.”