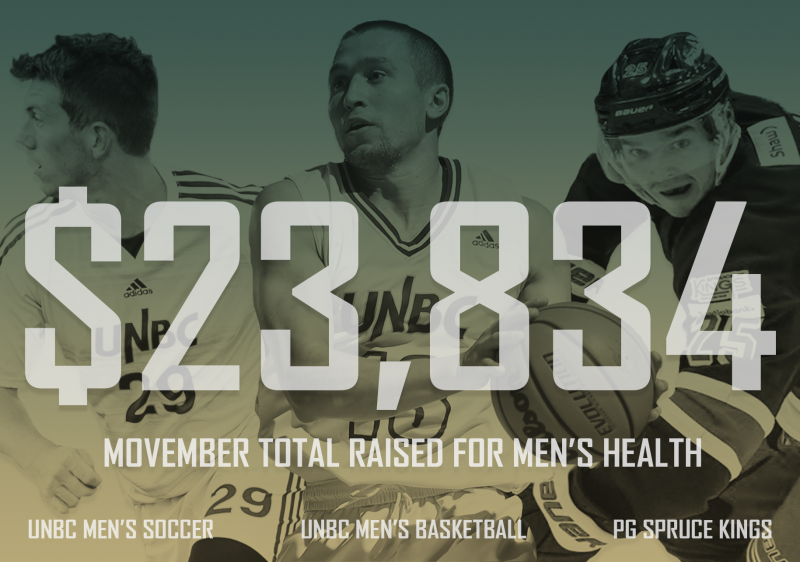 It started with a friendly challenge between three City of Prince George athletic teams. It has concluded with an incredible amount raised for an important cause.
The Movember challenge between UNBC Men’s Soccer, UNBC Men’s Basketball, and the Prince George Spruce Kings concluded today, with a collective $23,834 raised for men’s health.
UNBC Men’s Soccer, having raised nearly ten thousand dollars in 2019, spearheaded the challenge, calling out their Timberwolves basketball counterparts, as well as the BC Hockey League’s Spruce Kings. At stake? Bragging rights and a social media challenge.
More importantly, all three programs wanted to raise awareness and money for an issue that often flies under the radar in the public eye.
When the dust settled, the UNBC Timberwolves Men’s Basketball team “won” the challenge with an incredible $11,259 raised, good for third place of all U SPORTS teams across the country.
The Men’s Soccer team raised $6,950, while the Kings brought home $5,625. Both teams will be creating videos, while wearing UNBC basketball jerseys, and posting to social media this week.
All three programs wish to thank the donors and supporters of their Movember challenge.