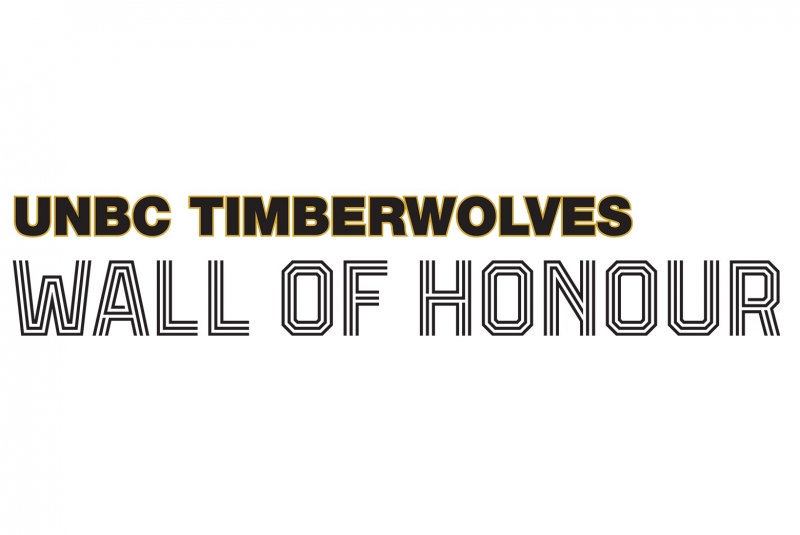 Over 23 years of University of Northern British Columbia athletics, there has been no shortage of incredible student-athletes who have left a remarkable impact and legacy in their wake.

Those student-athletes will now enter the spotlight, with the creation of the Timberwolves Wall of Honour (WHO), celebrating the greatest TWolves to ever wear Green and Gold.

“The Timberwolves have been around for more than two decades, beginning in the Canadian Collegiate Athletic Association and moving to the Canada West conference and U SPORTS level of university competition,” said UNBC Director of Athletics and Recreation, Loralyn Murdoch. “The time felt right to create a Wall of Honour to begin to really celebrate those extraordinary individuals who helped build this program into what it is.”

“The Timberwolves are synonymous with UNBC and in recognizing these outstanding players, we also recognize them as outstanding people,” said UNBC Interim President, Dr. Geoff Payne. “These athletes came as players and emerged as leaders, both on and off the court. These UNBC Timberwolves that we are celebrating are truly outstanding ambassadors for their team, UNBC, their community and themselves and we could not be prouder.”

The inaugural class of 2021 is comprised of 15 members. In subsequent years, smaller classes of inductees will be honoured.

“To go back over two decades, with multiple teams in multiple leagues, and narrow it down to 15 inductees was not easy. There have been so many incredible Timberwolves,” said Murdoch. “We wanted to start with a class that told a big part of our story as a department, and celebrate them individually.”

Murdoch points to the WOH as an exciting step forward in honouring TWolves alumni, while also giving current and future UNBC student-athletes a tremendous example.

“Whether you’re at the NSC, using the facility as a young child, or someone who has lived in this community for 50 years, we hope you stop and enjoy the wall,” Murdoch said. “We hope that encourages those individuals to visit our website and read further. Plus, what an excellent way to display to our current and future Timberwolves what a storied history we have.”

To be eligible, student-athletes must be at least one year removed from their final year of competition. Murdoch acknowledged there were more than 15 deserving candidates, and is excited to welcome more to the Wall of Honour in future years.

“We could induct twice as many people as we are honouring this year. Whether an individual is celebrated this year, or in the future, we are hopeful it is a thrill for those who hear their name called. Twenty three years cannot be properly summed up in one year, but this is a tremendous step in that direction.”

The Timberwolves will release inductees one by one over the coming weeks, before unveiling the wall when the inaugural class is completely announced.