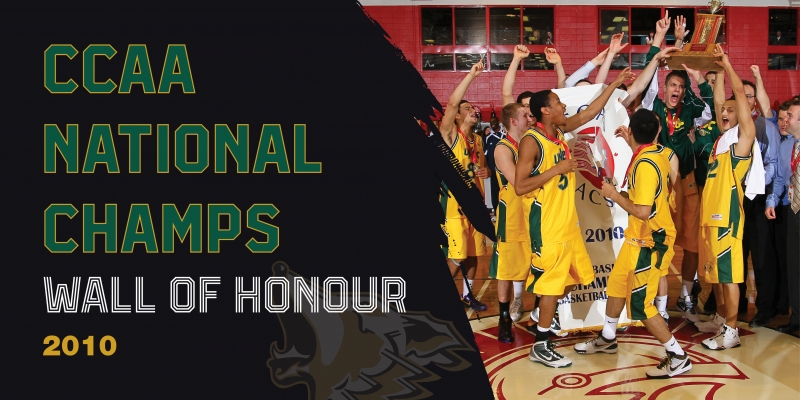 The banner hangs proudly, high above the glossy hardwood floor of the Charles Jago Northern Sport Centre gymnasium. It reads “2010 CCAA Men’s Basketball National Champions.” It will hang on that wall, above the hoop on center court, forever. A symbol of the journey from Prince George recreational team to collegiate powerhouse, and a representation of the foundation today’s programs are built upon. The inaugural class of the Timberwolves Wall of Honour would not be complete without the team that earned that banner, and made history; the 2010 UNBC Men’s Basketball team.

Just a year prior, the Timberwolves had experienced the lowest of lows, falling short in the National Championships that had been hosted in Prince George. The TWolves had lost their quarterfinal matchup by two points, and then lost in the bronze medal game on home court. However, not all was lost, as the program had established itself as a team to beat across the country.

2008-2009 was crucial for UNBC, as they added Inderbir Gill, Francis Rowe, Sam Raphael, and Matt Mills to the roster, along with head coach Mike Raimbault. Raimbault had spent the previous two seasons as an assistant coach at Brandon University, and brought with him a tough, competitive approach to training.

Prior to the 2009-2010 campaign, sharpshooter Jose Araujo was brought in, along with Sebastien-Kevin Louis, and dynamic post Kevan Madsen. Matt Mills claims the team’s intentions were defined from the first day of training camp.

“There was one clear, common goal set for the team. We wanted to win the National Championship. This was discussed and gave us a purpose in every practice, film session, and game day,” said Mills. “We all knew the expectation. Coach Raimbault and the assistant coaches expected a championship level effort, focus, and attention to detail every single day. We were held accountable and we got away with nothing.”

According to Raimbault, the mix of returning veterans and new faces made for a tremendous blend of personalities and playing styles; all of which contributed to the direction of the Timberwolves.

“The way the returning core of guys welcomed, challenged, and passed down the culture that had been established to the incoming recruits that year was a key component to our success. There was a lot of sacrifice from top to bottom that was imperative for the group to be successful.”

The TWolves opened the season on the road with a win over the Langara Falcons, but followed it up the next night with a four-point loss to the Falcons to even their record at 1-1. It would prove to be an important date for UNBC, as they would proceed to go on an unprecedented run the rest of the season.

According to forward Dennis Stark, the intensity of practices and level of competitiveness increased, as the Timberwolves set a new internal standard that would make it nearly impossible for opposition to put them in a situation they couldn’t handle.

“We were entering games with confidence, because no opponent played against us harder than we competed against each other in practice,” said Stark. “Raimbault held us to a very high standard every second of practice and play. We pushed one another, trusted each other, and believed in ourselves.”

“The competition level of practice was fierce,” said Mills, echoing Stark’s comments. “Everyone was pushing. Ultimately, that healthy competition prepared us for the toughest games and situations we found ourselves in on the path to the championship.”

Another factor that played a major role in the Timberwolves’ run towards a National Championship was the homecourt advantage every time they stepped on the floor at the Northern Sport Centre. Sold-out crowds were not rare at the NSC; they were a nightly event as the UNBC faithful proved to be the loudest, most raucous crowd in the entire country.

“That group was special, but it is important to recognize our group consisted of an entire community. Our run actually began with hosting Nationals the previous season, and those sold-out games with drums pounding at the NSC,” said Raimbault. “That support, without question, was a catapult for our beliefs that we could be champions.”

“2010 was a special year to start my UNBC Basketball career,” said Daniel Stark, who was a redshirt that season. “The spectators were on another level. The school, the city, and the basketball community were behind us, and in my mind, the culture was solidified from that year on.”

The Northern Sport Centre crowd was so impactful that the Timberwolves wouldn’t lose a game on home court the entire season. Following the 1-1 start, UNBC would rattle off 16 consecutive victories, concluding the season 17-1 and with a firm grasp on the number one ranking in Canada.

The TWolves earned a bye through to the semifinal of the BCCAA playoffs, where they dispatched Capilano University 79-69, send them to the Provincial title game. In the championship, UNBC drubbed the Vancouver Island University Mariners 84-65, booking a ticket to the CCAA National Championship tournament for the second consecutive season.

The TWolves also dominated to the provincial award list, with Gill winning BCCAA Player of the Year, averaging 17.9 points, 5.7 assists, and 4.4 rebounds per game. Kevan Madsen was named to the All-Rookie Team and BCCAA Rookie of the Year, thanks to his 10.6 points and 6.9 boards per game, while Gill and Araujo were both named First Team All-Stars. Finally, Raimbault was named BCCAA Coach of the Year, as the TWolves outscored opponents by 344 points over 18 games. Over the regular season, eight different players averaged at least seven points per game, as Raimbault found a way to motivate the entire roster.

“We had all the pieces, and we could score in so many different ways. We had a great bench, and in Indy, we had a leader that could put us on his back,” said UNBC assistant coach Dale Dergousoff. “Mike Raimbault was a huge reason for our success. He had a great way with the guys and was able to get the most out of players. He believed in all our players. That team had great chemistry, and everyone knew their roles.”

The CCAA National Championships were held in Calgary at the Southern Alberta Institute of Technology, March 18th to 20th. The Timberwolves made the trip with great expectations, holding the number one seed in the country.

However, the quarterfinals proved to be a massive hurdle to overcome, as UNBC fell behind by 20 points in the second half to the Fanshawe College Falcons. The intensity and competitiveness of practice paid off, as the TWolves did not panic, chipping away and eventually coming all the way back for a 76-71 win.

In the semifinal, UNBC took on the Mount Saint Vincent University Mystics, but had little trouble dispatching their opponents from Halifax, drubbing them 80-58.

That set up a championship date with the SAIT Trojans, who were looking to be crowned National champs in front of their home fans. However, what quickly became evident was the matchup was as much a home court advantage for the Timberwolves as it was for the host Trojans. Busloads of Timberwolves fans had made the trip east, including UNBC President George Iwama, and a team of drummers from UNBC’s First Nations Centre.

“During those finals, playing SAIT, we had as many fans in green and gold as SAIT had in red,” said Dennis Stark. “I’ll never forget the feeling of immense belief in ourselves and in our preparation as we lined up for opening tipoff.”

From that opening tip-off, the game – and history, belonged to the Timberwolves. They attacked the Trojans from the first possession, overwhelming SAIT at both ends of the court. When the final buzzer sounded and fans stormed the court, UNBC had earned its first CCAA National Championship with a 96-63 victory.

“That was crazy. We were the talk of Prince George that year, and it showed in the packed gym for home games. But that support hit the road,” said Dergousoff. “The picture taken after Nationals with our fans says it all. Our drummers were amazing, and that relationship with the First Nations community grew to the bond that still exists. The celebration is something I will never forget.”

At the conclusion of the tournament, Raimbault was named CCAA National Coach of the Year, while Gill earned National Tournament Most Valuable Player. Araujo earned Tournament First Team All-Star status, while sharpshooting guard Francis Rowe was named to the Tournament Second Team.

When the Timberwolves returned, banner in hand, they were celebrated on campus by the Prince George community, before hanging the banner on the wall of the Northern Sport Centre gymnasium.

“That National Championship team was so special,” said Loralyn Murdoch, who was head coach of the UNBC Women’s Basketball program at the time. “Together, they worked incredibly hard, and together they earned a historic moment for this school. That team represents all the players and coaches that came before them, and all that have come since.”

“The staff, from Dale Dergousoff, Trent Folk, John Tramble, Davis Rodrigues, and Ken Shields, was a group of people who changed my life and helped solidify the foundation of our team,” said Raimbault. “The players and staff were a collection of some of the all-time greatest people I have ever been fortunate to have spent time with. This is a team that each of us will remember being a part of forever.”