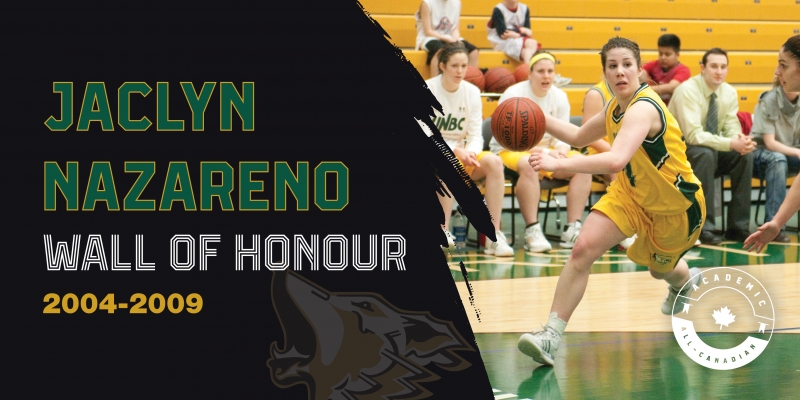 It is impossible to tell the story of University of Northern British Columbia Women’s Basketball without mentioning the name Jaclyn Nazareno. Over the course of her five-year Timberwolves career, she not only raised the bar on the court with her sensational play, but she managed to also serve as a culture-setter and gold standard for what it means to be a student-athlete in the community and classroom. The TWolves changed when Jaclyn Nazareno arrived in Prince George, making her an obvious inductee into the UNBC Timberwolves Wall of Honour.

Nazareno enjoyed a successful high school career with Thomas Haney Secodary School, where she played for coach Kerry Rokash. The THSS program had produced TWolf Ashley Neufeld, and UNBC coach Loralyn Murdoch said her newest recruit was put on her radar by Rokash, who vouched for her skill and character.

“We had Ashley from the same school, and Kerry was crucial in helping us get Jaclyn. He believed she could really help us,” said Murdoch. “She was the perfect fit for what we were building. School was important to her, and she loved to play and loved to compete. She could play point, she could score, and she took pride in defense. Terrific qualities, and a player that could really help us.”

Nazareno joined a TWolves program fresh off a 7-11 season in BCCAA play. Part of Murdoch’s recruiting class alongside Laurel Wallace, the 2004-2005 season marked the beginning of a tremendous upswing for UNBC basketball.

Though she wasn’t leaned on for massive offensive output in her freshman season, Nazareno immediately established herself as a crucial part of the Timberwolves culture. She averaged 2,5 points, and less than a rebound and assist per game, however, the Maple Ridge product’s work ethic and commitment to training would prove to be hugely beneficial. Miranda Kenna was a league all-star that season, and remembers her young teammate’s willingness to work, in practice and in games.

“When she got into the games, she would come off the bench with great energy,” said Kenna. “She was already really solid and dependable, doing the little things. By the end of the year she was getting solid minutes and had games that made you realize what she could do. It was to no one’s surprise that she took off the next year.”

In her second season in green and gold, Nazareno found another gear. She earned a bigger role as the team’s top two scorers from the year prior moved on. The diminutive guard didn’t disappoint, scoring ten more points per game than her first campaign; leading UNBC with 12.4 points per game, while pacing the TWolves with 2.7 assists and adding 1.6 rebounds per contest.

Her scoring output was good for ninth in all of the BCCAA, while her playmaking numbers were 10th in the league. At the conclusion of the season, Nazareno was named Timberwolves Most Valuable Player.

The 2006-2007 campaign proved to be historic for Nazareno, as she managed to find a way to take another massive step in her development. The five-foot-five guard became the first TWolf ever to score 300 points in a single season, averaging 20.1 points per game, which also was a UNBC record. Her 2.9 assists per game were a top-ten mark in BCCAA, and she chipped in with 2.6 rebounds and her signature defensive intensity. She was named UNBC Most Valuable Player, but also earned a BCCAA First Team All-Star nod, and was named a CCAA All-Canadian for her sublime season.

“Jaclyn was just outstanding overall,” said Murdoch. “She really was our best defensive player. She took great pride in matching up on the defensive end, and she loved taking charges in big moments. She also ran our offense, and was able to make her teammates look good by putting them in great spots to execute.”

Beyond the court, Nazareno was making an impact on the Northern BC community, making an effort to grow the game with her involvement in youth camps. Among her pupils was Mercedes VanKoughnett, who learned the art of playing guard from Nazareno, before beginning her own historic UNBC career.

“I always looked up to Jaclyn. I remember her coaching me at camps, and she was always so positive with me. She understood the game so well and really helped me see the floor through the eyes of a point guard,” said VanKoughnett. “I will never forget watching her lead her team at Northern Sport Centre every Friday and Saturday night. Jaclyn inspired me to be a better player and motivated me to push myself. I admired her fire on defense, and her ability to lead. I will always be grateful to her.”

The 2007-2008 season proved to be historic for the Timberwolves, fueled by their veteran leader as they debuted in the brand new NSC. Nazareno leaned into her playmaking abilities, creating a balanced attack that included seven TWolves scoring at least 7 points per game. The fourth-year paced the team with 13.3 points and 4.7 assists per game, as UNBC went 11-5 and clinched the two-seed heading into the BCCAA playoffs. She finished sixth in the league in scoring and led all players in assists, clinching her second consecutive First Team All-Star nod.

The Timberwolves played host to the BCCAA playoffs at the Northern Sport Centre, and made the home crowd proud. They topped UBCO 62-56 in the semifinal, before beating Camosun College 71-54 to clinch the first Provincial title in program history. Nazareno was named a BCCAA Provincial Tournament First Team All-Star. At the CCAA National Championships in Halifax, Nova Scotia, the TWolves went 1-2, but Nazareno was named a tournament All-Star for her efforts. Additionally, she was named UNBC Best Defensive Player, and an Academic All-Canadian at the conclusion of the season.

In Nazareno’s final season, the Timberwolves continued to establish themselves as a premier team in the collegiate ranks. UNBC went 14-4, and Nazareno put a bow on her career with averages of 10.9 points, 4.4 assists, and 2.4 boards per game. She was named a BCCAA Second Team All-Star, making her the first Timberwolf earn a trio of league all-star nods, further cementing her place in UNBC history.  The TWolves earned a BCCAA silver medal that season, giving Nazareno her second provincial medal.

A look at UNBC’s record books, and it is easy to see the impact Nazareno had statistically. She concluded her career with the single-season marks for points and assists, and finished tops in all-time scoring and assists. But as the ultimate team player, perhaps the greatest measure of her impact is the success of the Timberwolves in her time in green and gold. In the five seasons prior to her arrival in Prince George, the TWolves were 34-54 for a 39% win rate. In her five seasons at UNBC, the program went 56-30, for a 65% winning percentage.

Nazareno now lives in her hometown of Maple Ridge with her husband Sam and son Anthony. She is a teacher at Eric Langton Elementary School. Like the Timberwolves program during her time at UNBC, her students are in good hands.

“Jaclyn was a leader, on and off the court, and she took a lot of pride in being a Timberwolf,” said Murdoch. “She was a role model, she trained harder than anyone, worked in the classroom, and loved volunteering with the youth in the community. And on game nights, she came to win. She epitomizes what being a UNBC Timberwolf is all about.”