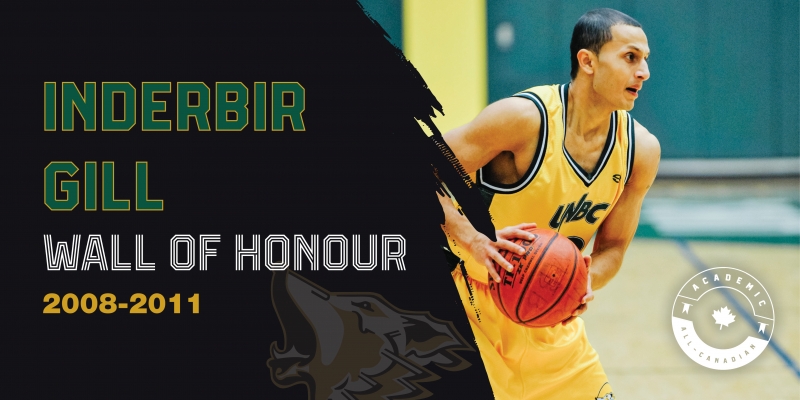 When honouring the best and brightest in UNBC Athletics history with the creation of the Timberwolves Wall of Honour, the career of Inderbir Gill is a fitting place to start. The most decorated student-athlete in TWolves history, Gill left behind a legacy of unmatched success, an overflowing trophy case, a storied work ethic, and an unapologetic commitment to his teammates.

A 2008 transfer to UNBC from Everett Community College in Washington State, Gill was recruited sight unseen by Timberwolves coach Zane Robison. He had led the North West Athletic Association of Community Colleges in assists and steals, before deciding to complete his final three years of eligibility in Prince George. Little did anyone know the immense impact Inderbir Gill would make on UNBC Athletics.

According to longtime UNBC Men’s Basketball assistant coach Dale Dergousoff, Gill was the ideal player at the ideal time to take the Timberwolves to the next level.

“Inderbir was a perfect fit for Mike Raimbault, who had just taken over as head coach of the program.  He brought a complete package that had never been seen before at UNBC; he was tough, competitive, hard-working and he was great to coach,” said Dergousoff.  “He would set the new gold standard for UNBC Men’s Basketball.  The energy, passion and packed houses during those seasons were so memorable, and Indy had a big part in that.”

In the 2008-2009 season, his first year at UNBC, Gill averaged 16.4 points per game, 5.4 rebounds per game, and a UNBC record 6.8 assists per game, pacing the Timberwolves to a 12-6 regular season record. At the conclusion of the campaign, the six-foot guard earned UNBC Most Outstanding Player, a BCCAA First Team All-Star, and CCAA All-Canadian honours, helping the TWolves to Provincial bronze and a fourth-place finish at Nationals.

The 2009-2010 season was pure magic for Gill, as he put the Timberwolves on his back, leading the team to the most memorable year in program history. Averaging 17.9 PPG, 4.4 RPG, and 5.7 APG, the quicksilver playmaker led the TWolves to a 17-1 regular season, a BCCAA Provincial Championship, and the CCAA National Championship. Gill earned Academic All-Canadian status, and UNBC MVP, but that was just the beginning of his accolades. BCCAA named him a First Team All-Star and Player of the Year, as well as MVP of the Provincial Tournament. At the National level, Gill earned CCAA All-Canadian status, MVP of the National Tournament, and incredibly, was named CCAA National Male Athlete of the Year.

Dennis Stark played alongside Gill in the National Championship season, and said it was easy to follow a leader who was willing to go the extra mile to ensure his teammates and his team were successful.

“It must be a coach’s dream to have a captain who is your most talented player, hardest worker, and fiercest competitor. Gill held us all accountable, and as a player, you respected and responded to his feedback because there was nothing he would ask of us that he wasn’t doing himself,” said Stark. “In games, he knew when to take over and make the big play, but also always got the ball to his teammates in spots where we could excel and play to our strengths.”

As an encore, Gill’s final season in green and gold was marked with more incredible achievement. On his way to earning a third UNBC Most Outstanding Player award, along with BCCAA First Team All-Star status and BCCAA Player of the Year, the fifth-year guard averaged 21.3 PPG, 4.5 RPG, and 5.2 APG. The Timberwolves went 16-2, and Gill was named an All-Canadian and became the first UNBC student-athlete to earn CCAA National Player of the Year.

At the conclusion of his UNBC career, Gill’s name was, and continues to be, a constant in the program record books. Despite playing just three seasons in Prince George, he retired as the second-leading scorer in team history with 1001 regular season points. His 319 assists were also top spot in TWolves history, thanks in large part to the fact that he has three of the four top single-season assist marks ever in a UNBC jersey.

However, what stands out about Gill, beyond the eye-popping statistics, is his leadership and will to win. Coach Mike Raimbault points to his leader’s character as a major factor in the run of unparalleled success for UNBC Basketball.

“Obviously, Inderbir was a tremendous player, but he was an equally great person and teammate.  His work ethic was unmatched and his competitive spirit and will to win was amazing.  He allowed his coaches to push him, to challenge him, and that allowed for the rest of the team to be coached and pushed as well.  His ability to lead from the front with a selfless pursuit of excellence truly made each of us, myself included, strive to be our absolute best each day.”

Current Timberwolves Men’s Basketball head coach Todd Jordan served as an assistant during Gill’s UNBC career. He says the example left behind by the decorated legend remains the green and gold standard.

“Inderbir was in one word, a winner.  He may have been the most gifted leader I have ever coached.  He had a way of holding himself and others accountable with a demanding presence.  His intense work ethic, and accountability made him so respected. On the court, Inderbir was an excellent playmaker and scorer, and his accolades show why he should go down in history as one of the greatest Timberwolves ever.”

Gill has gone on to a successful professional career overseas. His shadow still looms large at UNBC, making him an obvious inductee in the inaugural class of the Timberwolves Wall of Honour. The ultimate teammate, the ultimate competitor, the ultimate leader. Perhaps the final word should go to Stark, who went to battle alongside Gill for years.

“In an imaginary game of pickup consisting of all past and present UNBC basketball players, I’m always picking Inderbir Gill first.”