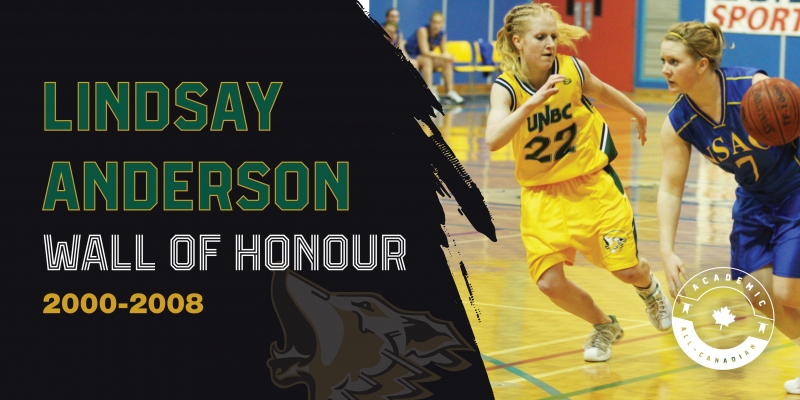 The University of Northern British Columbia Women’s basketball team was just one year into its existence at the BCCAA level, and Timberwolves coach Loralyn Murdoch knew she needed a standard-bearer for the program. In the summer of 2000, she met Lindsay Anderson, and the TWolves changed forever. What followed was one of the finest careers ever in green and gold, worthy of being the newest inductee into the UNBC Timberwolves Wall of Honour.

Playing for Melfort Composite Collegiate in Melfort, Saskatchewan, Lindsay Anderson had already established herself as a difference maker. Craig Beaucamp, who has since coached at the U SPORTS level for two decades, was her coach at Melfort, and said Anderson carried herself in a fashion that was rare for the high school level.

“The word that comes to mind is fiery. She was incredibly competitive, and incredibly hard on herself,” said Beaucamp. “She really hated to lose. In fact, we spent some time learning to contain it. If she had a poor game shooting, she was in the gym the next morning, putting up shots. Compared to others her age, she was so committed and passionate about working on her game.”

Murdoch was first exposed to Anderson when the guard was representing Team Saskatchewan and Murdoch was on the Team BC coaching staff. Beaucamp introduced his star guard to the UNBC bench boss, and she soon committed to make the move to Prince George for the 2000-2001 BCCAA season.

“I knew she would end up going somewhere to play, so I was happy she decided on a good program in UNBC,” said Beaucamp. “Her ball-handling skills were as good as anyone, boy or girl, at that age. She was truly as skilled as anyone in Saskatchewan at the time. But what stood out was her love for the game. UNBC got a good one.”

It didn’t take long for Anderson to assert herself as the heartbeat of the Timberwolves. In year one, she actually led UNBC with 13.1 points, while adding 4.4 rebounds and 2 assists per game. The TWolves went 3-15, but Murdoch knew she had something special in her wildly intense guard, who was named the team’s Most Valuable Player at the conclusion of her freshman season.

“Her passion was outstanding. She really did raise the bar the moment she committed to UNBC,” said Murdoch. “She had an extremely high personal standard, and she worked hard and set an example from day one. She did not like to lose, and there was not a player or situation that Lindsay would ever back down from.”

It didn’t take long for the hard work and tenacity of their young quarterback to start paying off in the standings. In 2001-2002, the Timberwolves improved to 8-10 in the BCCAA standings, missing out on the first playoff appearance in program history due to a tiebreaker. Anderson, playing her typically ferocious on-ball defense, averaged 9.4 points, 4.1 rebounds, and paced UNBC with 2.5 assists per contest.

According to Miranda Kenna, who was in her first season at UNBC in 2001-2002, Anderson was never afraid of a big moment; whether that be in a close game in regular season play, or an otherwise-regular scrimmage in training.

In year three, something clicked. For the first time in program history, the TWolves finished the season over .500. Way over. A 13-5 record in regular season play put the league on notice, and it was Anderson driving the bus in a major way. Her 15.8 points per game led all scorers in the BCCAA while her 4.2 assists per contest was good for second in the league. She chipped in with four boards per game, and was rightfully named a BBCCAA First Team All-Star at year’s end.

An overtime defeat in the playoffs couldn’t dim Anderson’s historic year, as she was also honoured as a CCAA All-Canadian; the first female Timberwolf to ever earn the distinction. She was named UNBC Most Valuable Player, and in the classroom, the Saskatchewan product also separated herself, being named an Academic All-Canadian.

“Lindsay made all of us, including me, better players. That is what great teammates do; they make you better,” said UNBC guard Ashley Neufeld. “I remember being terrified of her in my first-year. I would happily go up against any guard in the league in games, but there I was, having to go against Lindsay in every practice. She was so fierce and determined.”

After stepping away from the program for a season, Anderson returned in 2004-2005, ready to continue to push the Timberwolves to unchartered waters. The team had slipped to7-11 in her absence, but Murdoch had put together a strong recruiting class that, along with her returning star, had a chance to get back in the mix at the top of the BCCAA standings. The TWolves did just that, going 12-6, tied for second in the province.

The idea of rust only applies to those who don’t work to shake it off, clearly, because Anderson was again her impactful self for the green and gold. She paced UNBC with 13.3 points per game, which was good for fourth in the league, adding 3.1 rebounds and 3.4 assists per game; the passing numbers placing her fourth in British Columbia. The TWolves also made history, earning the first playoff victory in program history, before falling short in the semifinals on the postseason. After the season, Anderson was named a BCCAA Second Team All-Star, UNBC Best Defensive Player, and an Academic All-Canadian.

Anderson graduated from UNBC in 2005, concluding her time as a UNBC Timberwolf. Or so Murdoch thought. In 2007, the TWolves had established themselves as a premier program at the collegiate level and were set to host the BBCCA Provincial Championship at Prince George’s brand new athletic facility; the Charles Jago Northern Sport Centre. The UNBC bench boss knew the TWolves had a roster that would be in the mix to compete for the first banner in team history, but knew a certain missing ingredient may be enough to put the program over the top.

That fall, Lindsay Anderson returned for her fifth and final season of eligibility with UNBC, with her eyes set firmly on a BCCAA title. Her role would be different; UNBC was loaded with key contributors like Jaclyn Nazareno, Laurel Wallace, Kady Dandeneau and Carlye Hicks, so Murdoch wanted her returning veteran to play the role of leader, distributor, and example.

Not being leaned upon for offensive production, Anderson averaged 5.8 points, 2.5 assists, and 1.5 rebounds, and the TWolves went 11-5; good for the second seed. Four of her teammates averaged double figures offensively, as the dynamic and deep roster looked prime for a run on home court. They did just that. In the semifinals, the TWolves topped UBCO to advance to the final, where they beat Camosun College 71-54 to win the first Provincial banner in program history. Player of the Game in that championship? None other than the veteran, Lindsay Anderson.

“Lindsay had all the characteristics we, as Timberwolves, strive for,” said Murdoch. “She began on a team that was at the bottom of the league, and left with a Provincial championship. She was a devoted, natural leader and motivator. She battled injuries and ups and downs, and came out on top. Her performance on the court spoke for itself.”

On top of her long-awaited BC title, Anderson’s name was not difficult to find in the Timberwolves record books. She retired as the program’s all-time leader in points and assists, and sat top ten in rebounds.

After graduation, Anderson pursued further education in medicine, graduating with an MD from the University of Saskatchewan. She is currently a fellow, with a focus on surgery.

“Lindsay truly set the tone for UNBC Basketball by building a locker room culture that was all about striving for success,” said Murdoch. “She really shaped this program. Her passion to represent UNBC was unmatched. She is the epitome of a Timberwolf.”