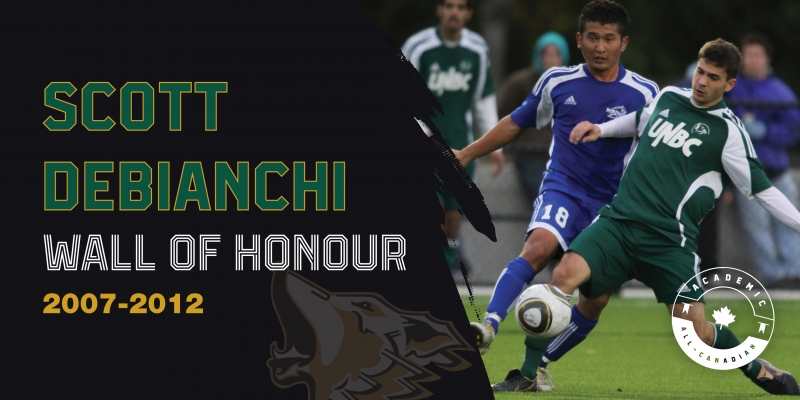 For any team to be successful, it needs foundational pieces. Building blocks, established in the early stages of the program that carry the weight and burden a heavy load. In the case of University of Northern British Columbia Men’s Soccer, one player stands out as the foundational piece and gold standard. That player is Prince George product Scott Debianchi, the first star in TWolves Men’s Soccer history. For that reason, Debianchi was an obvious choice for the Timberwolves Wall of Honour.

In 2007, UNBC announced it would become a two-sport school, as Men’s and Women’s soccer programs would be added to the basketball teams, doubling the size of the Timberwolves athletic department. The recruiting process began for Men’s Soccer coach Sonny Pawar, as he looked to build a roster to compete in the BC Collegiate Athletic Association. Part of the inaugural recruiting class was an athletic defender who had grown up in the Prince George Youth Soccer Association. Pawar knew getting Scott Debianchi in green and gold was a massive step for the TWolves.

“Even as a young player, Scott’s technical skill and tactical understanding of the game was well beyond his years. He was a shy high school graduate who wasn’t even sure if he would attend university, but he immediately set a standard that reached far beyond the soccer pitch.”

It didn’t take long for Debianchi to make an impact on the Timberwolves and on the collegiate ranks. Despite being a defender, the freshman scored three goals, earned UNBC Most Valuable Player honours, and was named a BCCAA Second Team All-Star, making him the first Timberwolf soccer player to earn the distinction.

2008-2009 was much of the same for the Prince George Secondary School graduate, who seemingly raised his game every time on the pitch. Tasked with matching up with the opposition’s best attackers, Debianchi was again a difference maker for the Timberwolves. At the conclusion of the campaign, he was again named TWolves MVP and earned BCCAA Second Team All-Star honours.

Fellow Timberwolf Andrew Seabrook had been a teammate of Debianchi’s since they were 12-years-old. He points to Debianchi’s dedication to getting better as incredibly important to the success of the program.

“I got to see Scott’s progression first hand, and he kept improving every year. He literally kept us in every single game,” said Seabrook. “He would shut down the other team’s top players with his speed and tackling. Somehow, in those tough games, he could raise his level even further to influence a game. A great player and great teammate.”

Year three was more history for Debianchi. The ultra-athletic centre back continued to influence games and results, doing enough to win his third consecutive Timberwolves Most Valuable Player. In the BCCAA year-end awards, he became the first UNBC soccer player to ever be named a First Team All-Star.

In the fourth year of UNBC Soccer, the Timberwolves reached new heights, powered by their homegrown star. Debianchi and the TWolves advanced all the way to the BCCAA Provincial final, earning a silver medal; the only soccer medal in UNBC history. Unsurprisingly, Debianchi was named team MVP and garnered his second consecutive BCCAA First Team All-Star distinction.

According to Pawar, Debianchi’s success was partly due to natural ability, and partly due to his fierce commitment and unfailing will.

“Scott was so gifted with incredible speed and athleticism, but he flat out refused to lose,” said Pawar. “It is no confidence that the most talented players are often the most dedicated to their craft. Scott spent hours and hours honing his skills and working on his fitness. He loved to train as much as much as he liked to play in matches.”

In 2011-2012, the BCCAA rebranded to become the Pacific Western Athletic Association, but Debianchi’s impact remained incredible. He put a cap on an unmatched career by again providing the engine for the Timberwolves. His fifth and final season was celebrated with a fifth TWolves Most Valuable Player award, as well as his third consecutive league First Team All-Star nod.

“Scott was the best. He never made a mistake, and was an example of consistency at a high level,” said his UNBC teammate Lyle Eggen, who played three years with Debianchi. “It is a credit to his discipline and commitment. My goodness he was good. He was the best player on the field in every single game we played.”

The Timberwolves record books certainly didn’t look the same when Debianchi finished his career. His 62 career games are fourteen more than anyone else in UNBC’s collegiate history, and his nine goals are good for second on the all-time list, while sitting tops for any defender to ever wear green and gold. His is the only UNBC student-athlete to be named a league all-star five times.

“Scott developed to a level where he was considered the best player in British Columbia,” said Pawar. “He was a wonderful leader who led by example, and a wonderful ambassador for our team, for UNBC, and for sport within our community. Scott is the original Captain of UNBC Soccer. In all the years I have coached at the university level, I can’t think of a more deserving player to be honoured like this.”