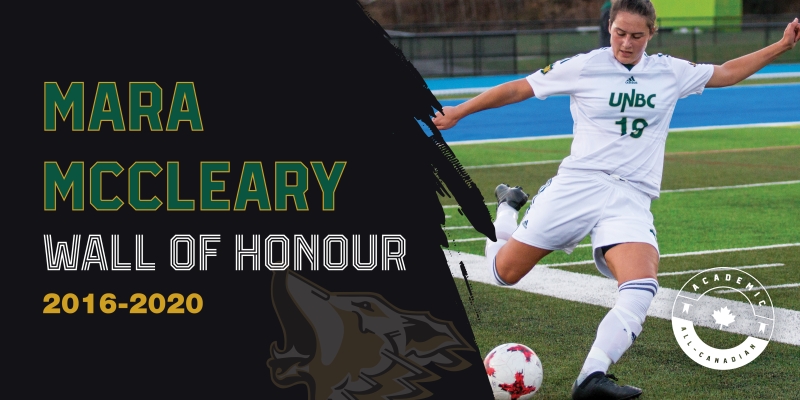 She arrived in Prince George and proceeded to lead UNBC Women’s Soccer to its most successful run in program history. No one was harder to play against, game in and game out, than Timberwolves great Mara McCleary. A gritty, athletic, talented defender who galvanized her teammates and pushed the program to new heights, McCleary set a gold standard for the TWolves, making her an incredibly deserving inductee in the 2022 class of the Timberwolves Wall of Honour.

When Neil Sedgwick was named head coach of the UNBC Women’s Soccer program in February of 2016, he took over a program that was coming off a one-win season and was saying goodbye to a number of crucial contributors. Using his strong connection to the Vancouver Island soccer scene, Sedgwick identified McCleary as a potential cornerstone for a TWolves program looking to turn things around. He had coached the long and gifted center back since she join the Vancouver Island Wave program when she was 13 years old, and knew McCleary could come in and make a difference.

“When I took the position at UNBC, Mara had still not committed to a university program. I invited her for a visit, and we were incredibly thrilled when she chose to become a Timberwolf. First, Mara knew my coaching and the way I envisioned the game being played. Second, Mara brought this toughness and competitiveness that I knew would help the team. And it certainly did.”

With a new playing style and focus on possessing the ball, it didn’t take long for McCleary to establish herself as a leader for Sedgwick’s program. Often, it takes years for a student-athlete to acclimate to the university level, but the five-foot-eleven defender managed to play every minute of every game for the Timberwolves. The team went through significant growing pains, but the Victoria product won UNBC Best Defensive Player, as well as UNBC Female Rookie of the Year. McCleary was also named a U SPORTS Academic All-Canadian for her work in the classroom.

Fiona Raymond was a fourth-year defender in 2016, and remembers the addition of McCleary being a turning point for the Timberwolves.

“When Mara joined the defensive line as a rookie, she immediately made a massive impact. What I noticed right away was her voice, and the command she took over the backline. It is rare in a seasoned player, let alone a rookie, to have the confidence and ability to do that. But Mara was exactly what we needed.”

The following season, the Timberwolves again fielded a team of youth and relative inexperience, but had the mindset of a group that believed in itself. McCleary was incredibly important to their gameplan, and she would be leaned upon time and time again. Both goalkeepers, Brooke Molby and Madison Doyle, were first-year players, putting extra stress on McCleary to find a new level and galvanize the team in front of the freshmen keepers. Molby said her star center back’s work ethic meant every player on the pitch had to play with the same effort and dedication.

“Having Mara did wonders for our young team’s confidence. Being in a league as tough as ours is very difficult, but Mara made every one of us believe that it didn’t matter how small our school was, or how young our team was. We depended on her, and she made us know that we could show the rest of the league who we were. She was the most dedicated and hardworking player on the pitch, which made us the most dedicated and hardworking team. Mara gave us confidence to believe we were just as good as our opponents and that we deserved to be there.”

That season, McCleary emerged as a premier defensive player in the conference. When a loose ball needed to be cleared from danger, it was often McCleary getting her foot on it. When the Timberwolves looked to generate offense from their defensive third, it was often McCleary creating that run with a great ball over the top. The TWolves offensive production tripled, while they allowed 19 nine less goals into their own net. As a result, the program made history, setting new marks for wins and points, and clinching a Canada West playoff appearance for the first time. McCleary was named Best Defensive Player for the second consecutive year at season’s end.

“Mara was a massive talent. She is one of the best players I had the privilege to play with,” said Raymond. “She led to a change in the team’s success, including offensively. Having confidence in your backline allows you to take risks on the frontline, and with her presence back there, we were able to be much more offensive.”

McCleary continued to improve in 2018, as the Timberwolves took another step forward. This included in training, where the team’s intensity, commitment, and culture progressed alongside its veteran leader in the defensive backfield. Kiana Swift was a freshman in 2018, and said McCleary’s attitude and abilities made her the straw that stirred the drink, in practices and games, for the TWolves.

“I can say I am a better person, player, and teammates because of Mara. She led by example, and that truly impacted me as a first-year. She was there early for practice, pumped up balls, carried gear to and from the pitch, never yelled at any of her teammates, and was always willing to listen. I remember thinking I want to be like Mara. I want to be as good a teammate as Mara. She set the bar for a team culture that practices inclusivity, community, and working together.”

That season, the TWolves set program records for goals scored, and won their final two games of the season to clinch a second consecutive playoff berth. In the playoffs, against the University of Manitoba, the program reached a new milestone, beating the Bisons in penalty kicks. Who scored the first playoff goal in UNBC Women’s Soccer history? None other than their third-year center back, getting her head on a corner kick and pushing the program to new heights. Unsurprisingly, she was named UNBC Best Defensive Player at the end of the season.

“Mara was a pillar throughout that entire season, making sure no forwards got past her and working tirelessly every game for our team,” said Swift. “It was fitting she scored that playoff game. Having Mara on that pitch gave us confidence and a sense of security in our backline. She was a force to be reckoned with.”

In her fourth season, the Timberwolves were at their stingiest, setting a team record for goals against, and pushing the top teams in the conference. McCleary was at her best in big moments, which didn’t surprise Sedgwick, who had seen her relentlessness and commitment to improvement.

“Mara competed every minute of every game, and every minute of every training session. She could be with me in an individual training session and Mara would be competing, with herself, to become better. She spent countless hours on her own, searching for that next one percent that would make her a better player and a better contributor to our team. It has been wonderful to see Mara grow to where she is. It has been a gift to me to get to work with her.”

The Timberwolves made more history by qualifying for a third consecutive playoff appearance, and McCleary received a long overdue Canada West All-Star nod for her efforts, though she had long been considered one of the finest defenders in the conference. She was also named UNBC Best Defensive Player for the fourth time in four seasons and earned the team’s Most Valuable Player.

McCleary’s fifth season projected to be yet another step forward for the team and for herself, but due to the COVID 19 pandemic, the year was lost. Despite the loss of competition, the veteran defender brought her signature commitment and intensity to training, helping the young players on the Timberwolves roster, and the future of the program. According to Swift, subsequent successes, both individual and team, can be partially attributed to how McCleary handled herself every day.

“Her talent, commitment, and work ethic go unmatched. The same can be said for her impact off the field, in terms of her leadership and profound impact on her teammates and coaches. Her legacy is leading by example and being of the best teammates any player could ask for. I am forever grateful to be able to practice, play, and be friends with Mara. I believe you can draw a straight line from the success of the program has had and will have, to her commitment to being an excellent player, leader, and teammate.”

McCleary graduated from UNBC with a Bachelor of Science in Physics and has plans to play the game professionally in Europe. She is currently playing with the Victoria Highlanders of League1 BC.

A program-changer, a culture-setter, an unrivaled defender, and one of the greatest teammates in UNBC Women’s Soccer history. It’s tough to put Mara McCleary’s impact on UNBC into words, so perhaps a fellow Timberwolf can sum it up best.

“Mara inspired others to work harder. She set the standard. As anyone who their role model was on the team, and they would say Mara, but all for different reasons. She was hard working. She was smart. She was dedicated. She was funny. She could kick the ball better than anybody. Because no one could beat her or knock her of the ball. She inspired everyone to be the best versions of themselves,” said Molby. “She truly is one of the best athletes and people to ever wear a Timberwolves jersey. Her love for the Timberwolves made her a legend, and legends like her deserve to be remembered forever.”