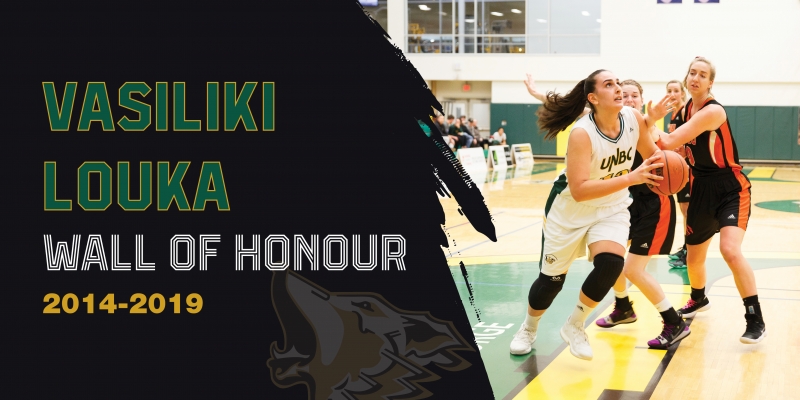 The University of Northern British Columbia Women’s Basketball team had a new coach, in a new league, and needed a new star to lead them in a new direction. When Vasiliki Louka arrived on campus, the Timberwolves got exactly that. The Greek forward would put together one of the greatest and most celebrated careers in UNBC history, making her an obvious choice for the inaugural class of the Timberwolves Wall of Honour.

Arriving in Prince George in the summer of 2014, Louka joined a TWolves program that had just bid farewell to leaders Mercedes vanKoughnett, Emily Kaehn, and Jennifer Bruce. UNBC coach Sergey Shchepotkin was working on his first recruiting class as leader of the green and gold, and utilized his European connections to land the international powerhouse. From day one with her young teammates, Louka was the most seasoned TWolf, fresh off her experience with the Greek National U18 team.

“Vasiliki arrived with very good European experience,” said Shchepotkin. “She brought great size, of course, but she also had a very good understanding of the game right away. We needed her to come in and lead us, and to be a hard worker, which is exactly what she did.”

Year one for Louka was one of great growth and responsibility, starting 19 games and putting up tremendous numbers for a Canada West rookie. The Athens product set UNBC freshman records for minutes, scoring, and rebounding, while setting a new TWolves overall mark for blocked shots. UNBC struggled to a 2-18 finish, but there was much optimism surrounding her future, thanks to a 11.3 PPG, 8.4 RPG, 1.6 APG, and 2.0 BPG line. Louka’s rebounding and blocks rate were top five in the conference. She was named team Rookie of the Year and UNBC Female Rookie of the Year at the conclusion of the season.

Despite the TWolves struggling with a 3-17 record in 2015-2016, those in attendance know they were far more competitive than the year prior. Louka welcomed fellow international Maria Mongomo to the fray, forming a young European duo that would wreak havoc on the conference in the coming years. Her sophomore numbers were 12.6 points, 6.6 rebounds, and 1.3 blocks per game.

Emily Holmes was a UNBC freshman in Louka’s second season, and would play alongside her Greek teammate for four years.

“She was such a dominant player. She was not only physically strong, but she was so skilled and could really shoot it for a post player,” said Holmes. “She had such a will to win, that you could see she would do anything to move the program in the right direction. Very few athletes have the passion V had. She was so strong-willed and determined in practice, always working on her skills. But she was also this loving and kind teammate.”

Prior to year three, something clicked for Louka. She and her brother Vaggelis, a member of the UNBC Men’s Basketball team, lived year-round in Prince George, and Vasiliki dedicated herself to taking a massive step on the court. In 2016-2017, Louka did just that. The Timberwolves qualified for the Canada West playoffs for the first time in program history, on the back of a massive campaign from the Greek post. She averaged 15.8 points, 9.3 rebounds, 1.9 assists, and 1.0 blocks per game, finishing top ten in CW in scoring and blocks, and top five in boards. At year’s end, Louka was named team Most Valuable Player, and UNBC Female Athlete of the Year.

The growth and historic rise of the Timberwolves continued in 2017-2018, setting new team marks for wins, and qualifying for the Canada West playoffs for a second consecutive season. Louka was again a major factor, setting new UNBC scoring and rebounding records. She put the league on notice, finishing top five in Canada West with 18.2 points, 12.2 rebounds, and 1.1 blocks per game, and earned her first career All-Star nod, being named to the conference’s Second Team. She was also named team MVP, and UNBC Female Athlete of the Year at the conclusion of the season.

“We worked so hard with Vasiliki to continue to develop her skills, but that only works if the player is completely invested,” said Shchepotkin. “Basketball was such a huge part of her life that she spent the time to perfect her skills and driving herself to the highest level. Every year she got better at everything. She was good under the basket, she added a good outside shot, and had good court vision. She was a great teammate.”

In her fifth and final season in green and gold, Louka put the cherry on top of a historic and program-altering career. She led the Timberwolves to its first winning season in history, as she rounded out her game to a near-unassailable level. The forward notched 17.3 points, 12.7 rebounds, 2.9 assists, and 1.1 blocks per game, leading the conference in boards, and her 17 double doubles were third in the history of the conference. In the playoffs, the Timberwolves topped Trinity Western to earn the program’s first CW postseason victory. Louka made more history after the year, becoming the first TWolf female athlete to be named a Canada West First Team All-Star, and earned her third UNBC Female Athlete of the Year.

Louka’s career led to her name being written all over the UNBC and Canada West record books. She concluded her TWolf career as the program all-time leader in points, rebounds, blocks, and minutes, and top five in assists and steals. At the conference level, Louka retired top-fifteen in history in points, field goals, offensive rebounds, top ten in blocks and free throws, and top five all-time in rebounds, minutes, and double-doubles.

According to Shchepotkin, Louka was a turning point for the program. He says the all-star forward set the tone that will last for years.

“She had a massive impact from day one. She asked a lot of herself, and her dedication raised her level and the level of her teammates. I think Vasiliki did a lot to help make UNBC Women’s Basketball recognizable across the conference and the country. She deserves this induction so much.”

In Vasiliki Louka’s five seasons in Prince George, the Timberwolves increased their win total every year. From last-place in the conference to three consecutive playoff berths and numbers that will stand up for generations. Since graduation from UNBC, Louka has joined the professional ranks in Europe, and is a member of the Greek National team.

“I mean, V is truly iconic,” said Pudlas. “Her stats and accolades speak for themselves. But, it is her passion for the game that is lasting. She is iconic.”