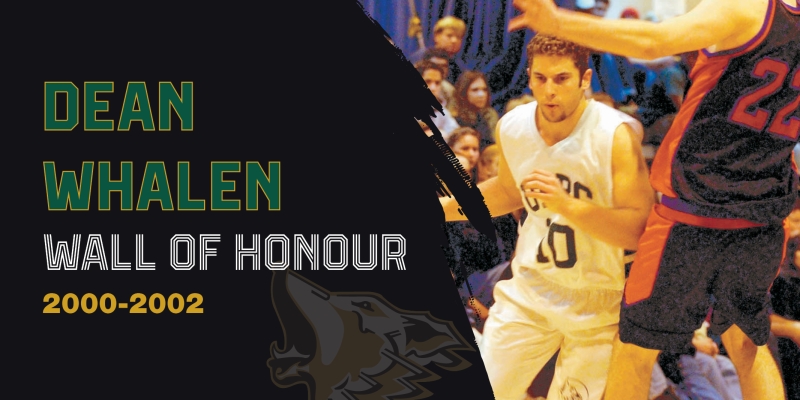 It’s certainly rare, but when it happens, it can change a program’s fate for years to come.  Every coach looks to recruit five-star, blue chip prospects, with fantasies of that player’s potential setting a new standard for others to aspire to. In the case of Dean Whalen, despite playing just two seasons in Northern BC, his production and legacy exceeded even the wildest of projections, posting numbers that have never, and may never, be touched. You can’t tell the story of UNBC Men’s Basketball without bringing up the name Dean Whalen, making him a deserving inductee into the Timberwolves Wall of Honour.

In 1999-2000, the Timberwolves Men’s Basketball team was in its first season of BCCAA competition, looking to develop into a program that could compete with the best teams in the province. UNBC coach Reg Carrick recruited Dean Whalen out of Terry Fox Secondary School, where he had played for legendary coach Rich Chambers.

A broad-chested guard with an innate knack for scoring the basketball, Whalen was recruited by a number of schools, but decided Northern British Columbia was the ideal spot to continue his career.

It didn’t take long for Whalen to make an impact in his freshman year, the 2000-2001 season. Whalen led all BCCAA rookies in scoring, averaging 14.4 points per game to go along with 4.6 rebounds. He finished top-20 in BCCAA scoring, and helped lead the Timberwolves to and 8-10 record and their first playoff appearance in program history.

Zane Robison was an assistant coach to Carrick in Whalen’s first campaign, and recalls the freshman possessed offensive instincts and a mentality rarely found in a teenage athlete.

“Dean was an incredibly gifted shooter that, quite honestly, terrified opposing coaches who had the difficult task of trying to find ways to stop him from scoring. He would demoralize them in warmup as they watched him shoot and never miss.”

Following his freshman season, opportunities were abundant for the Port Coquitlam native. Big schools came calling, offering him a chance to play at the CIAU (now U SPORTS) level. He had also turned heads as a leader on Team BC at the Canada Games in London, Ontario that summer. However, Whalen had developed a strong bond with Robison, who was named the program’s new head coach prior to the 2001-2002 season.

Whalen decided to play another season for the Timberwolves, and it would prove to be historic.

UNBC head coach Todd Jordan was a freshman for the Timberwolves in 2001-2002, joining a program led by Whalen, Raju Korotana, and veteran guard Mike Davis. Immediately, he recalls, he was struck by Whalen’s unique combination of power and grace.

“Dean was one of the most physically strong athletes to ever play for our program. He was one of those guys where the weight room translated to the court. He could really shoot the ball coming off screens, and when he needed, he could body guys off the dribble and get to the rim or his pull-up jumper. His ability to put the ball in the hole was really special.”

Really special, as complimentary as it is, may not suffice.  Something clicked for Whalen in his sophomore season.

On opening weekend, Whalen had a 35-point, 11-rebound game against the Langara Falcons, before dropping 41 points on Capilano the next evening. Paul Eberhardt who was then coach of the Blues, and continues to coach at the PacWest level, counts Whalen among the most talented players he has ever had to prepare for.

“Dean, Dean, the scoring machine. He could flat out put the ball in the hoop. He had great range on his three, but he could also get to the rim and he was good at drawing fouls. He only played two years, but if he played all four, he would have been the PacWest all-time leading scorer.”

Despite Whalen’s otherworldly talents, the program was still in its relative infancy, and Robison was seeking his first win as a head coach at the collegiate level. Cue more heroics from the sensation, who played every minute in a 47-point scoring outburst against Kwantlen College, securing Robison a win he wouldn’t soon forget.

“I had coaches coming up to me and saying they were amazed how Dean was able to score despite everything they threw at him,” said Robison. It made my job much easier as a first-year coach, knowing we had someone who could create his own shot and score at such an impressive efficiency.”

While his scoring exploits were certainly in part due to natural gifts, Whalen was renowned for his work ethic and willingness to work, day in and day out on refining his game. Mike Davis was the Timberwolves’ starting point guard that season, and points to his backcourt mate’s dedication as a major factor in his incredible ascension.

“I had the pleasure of playing with Dean for two years and his growth during his tenure with the Timberwolves was extraordinary. His dedication and commitment to the game made him one of the best scorers UNBC has ever seen. He was extremely focused on his craft, and he spent countless hours in the gym and in the weight room. During his UNBC career, his confidence, maturity, and leadership all grew alongside his skill.”

As the season progressed, the buzz around Whalen and the Timberwolves grew. The team was seeking a second playoff berth, and the phenom was looking to achieve a personal mark that had never been reached in BC college basketball.

Taking on the Okanagan University College Lakers late in the season, Whalen ensured the TWolves would be headed back to the postseason, scoring 38 points and adding 10 boards in a victory. In the final game of the season, he added to his legacy, becoming the first player in BCCAA history to score 500 points in a single season.

Whalen averaged a stunning 27.9 points per game, to go along with 5.6 rebounds, leading the Timberwolves to a 9-9 record. His scoring total led the country, and was 115 more points than the closest BCCAA competitor. At the time of this publication, 20 years after that historic campaign, Whalen’s 502 points have not been eclipsed in the league’s record books.

“He was so exciting to watch. To put up almost 28 points per game, you need to be incredibly consistent, and find ways to score despite defenses keying in on you,” said Jordan. “We definitely needed to play a style that was centered around Dean’s abilities, but to carry the load like that for your tam is impressive at any level of collegiate basketball.”

At the conclusion of the season, Whalen was named a BCCAA First Team All-Star, as well as a CCAA All-Canadian, and even earned the UNBC Best Defensive Player award.

The big schools came calling again in the spring of 2002, and Whalen decided to make the jump to the university level with the Alberta Golden Bears. In 2005-2006, he led U of A in scoring and was named a First Team Canada West All-Star; a tremendous accomplishment at the highest level of collegiate sport in Canada.

While no longer competing at the BCCAA level, the substantial ripples of Whalen’s historic splash in green and gold would be felt for years. Robison points to his star guard’s unrivaled production as a major factor in enabling the program to recruit high-end prospects, and eventually lay the groundwork for the Timberwolves team that would win the CCAA National Championship.

“Dean really set the tone for me in recruitment, demonstrating the type of talent a young program could have. He truly loved playing for UNBC and for our fans, and they loved him back. Those years were special to watch. Dean Whalen was special.”

Whalen now lives in Alberta with his wife Marcie and their five children. He has not donned a UNBC jersey in two decades, but his legacy as one of the most dynamic, gifted, and committed players in Timberwolves history, and a rightful member of the Wall of Honour.

“Dean was amazing,” said Jordan. “He is right there in a select group of guys who would be considered the best players to ever suit up for our program. A program changer.”