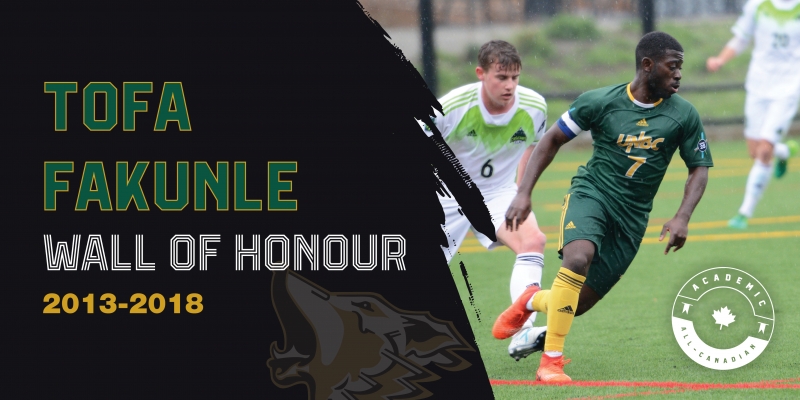 It is impossible to tell the story of UNBC Men’s Soccer without talking about the career of Tofa Fakunle. One of the most beloved athletes in TWolves history, Fakunle’s evolution as a player and a leader helped him rewrite the UNBC record books, while elevating the perception of Timberwolves soccer across the conference. ‘The Captain” left behind a legacy of competitiveness and passion, and made him an obvious choice for the Timberwolves Wall of Honour.

Originally recruited to UNBC by then-coach Alan Alderson, Fakunle arrived in Prince George in 2013 with tremendous expectations. He had been highly recruited by a number of the major programs in the conference, but decided Northern British Columbia was the place for him to compete at the university level. Fakunle had previously impressed Alderson as a member of the Alberta U16 Provincial team, with his unapologetic commitment and approach to the game.

“He was immensely polite before training, and then he was the most intense in training. He held himself to high standards, but he also went out of his way to make sure those around him were playing all out. His personality could fill a room, either with intensity or with a smile that could brighten the entire building. When I got the job at UNBC, he was instantly on my ‘find a way to get him here’ list. I knew he was the kind of player that would play a significant part in building a culture of excellence and winning together.”

In his freshman season, the diminutive dynamo led the Timberwolves in goals and points, earning the program’s Golden Boot Award and UNBC Male Rookie of the Year Award. The following year, in 2014-2015, Fakunle again paced the TWolves in points, leading the program to a record-high in wins and points, as the team took a major step forward.

In the summer of 2015, Alderson moved on and was replaced by Steve Simonson as head coach of the Men’s Soccer team. Like with any change in a program lead, came a shift in playing style, direction, and culture. Throughout the season, Simonson implored the Timberwolves’ fiery leader to channel his passion into leadership. According to Fakunle’s longtime UNBC teammate Jesse Rake, it led to growing pains, but ultimately an incredible shift in his approach.

“Within Tofa was burning passion to win. Everyone at this level is competitive, but Tofa was a complete other level. That passion occasionally boiled over to anger, but that’s where his growth showed the most over the years. Coach Steve emphasized a culture of respect, and this sharpened Tofa's ability to lead immensely. In those early years, his emotions might take him out of the game, but once he got past that, he was a whole new player. Steve empowered him to be our leader, and he was a new player.”

With a full year under his belt playing for Simonson and embracing the role of Timberwolves captain, Tofa Fakunle reached new heights in 2016-2017. UNBC set new marks for goals, wins, and points, and Fakunle broke program records for goals and points in a season. For his efforts, he was named TWolves Most Valuable Player and had his name etched on the UNBC Male Athlete of the Year Award, while also earning U SPORTS Academic All-Canadian status for his work in the classroom.

According to Owen Stewart, who was a freshman with the Timberwolves in 2016-2017, Fakunle was a tremendous example how to handle one’s self on the pitch, in training, and in the community.

“He is a top-class person. Tofa showed us all the effort needed to grow. He was willing to help anyone who needed it, on or off the field. We saw him as the first to take a true shot on UNBC, because he was an elite athlete from a big city who saw the potential of the program.

Fakunle had just one thing in his crosshairs for his senior season in green and gold. The goal he set from day one in Prince George was to help the Timberwolves to the first Canada West playoff appearance in program history, and the 2017-2018 campaign represented his final chance at that objective.

Where there is a will, there is often a way. In Tofa Fakunle’s case, that will was indomitable. He paced the Timberwolves in goals and points, and the team set UNBC marks in wins, goals, and points, earning the first conference playoff appearance in program history. At the conclusion of the year, Fakunle was named a Canada West All-Star, putting an appropriate cap on his university career.

Tofa Fakunle concluded his career as the Timberwolves all-time leader in goals, assists, points, shots, and game-winning goals, while sitting top-five in games played and starts. He also held single-season marks for shots, goals, assists, and points. According to Simonson, his team’s captain had become synonymous with all things UNBC Soccer.

“There is only one Tofa Fakunle.  He was such a presence in our program both on and off the field. He was an incredibly talented player for us, and when he was playing at his best, he was an absolute handful for opponents. Tofa took on the challenge of being a captain of developing program that definitely isn’t without its challenges.  He grew in his leadership over his time at UNBC and has carried that on to his next chapter within the game.”

That next chapter included playing for Cavalry FC of the Canadian Premier League, the top level of soccer in the country. Unsurprisingly, Tofa Fakunle became a fan-favourite and culture setter.

“I think UNBC Soccer is where it is now because of people like Tofa,” said Stewart. “I know he will continue to be an advocate for this program for his entire life.”

Despite often being the smallest player on the pitch, Tofa Fakunle’s impact is among the most enormous. A fitting inductee in the inaugural class of the UNBC Timberwolves Wall of Honour.

“I will remember him most for what he wanted for this program.  Many a day he would come to the office and ask for advice, hoping to help his team to grow, and wanting to improve himself,” remarked Simonson. “I think the lessons he took from his time at UNBC will be lasting, as will the memories that he has left for those who knew him here.”