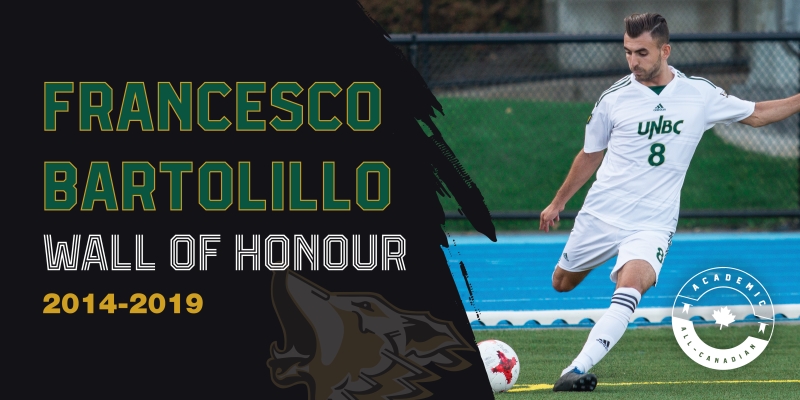 It is no easy task to display excellence at the highest level of university sport in the country. It is even more difficult and rare to be elite in athletic competition, while maintaining an incredible level of academic achievement. Finally, it is nearly impossible to thrive in both those areas, and find the time and energy to create a gold standard of community involvement and philanthropy. All that to say, it is beyond comprehension to find a student-athlete like Francesco Bartolillo, a hugely deserving inductee into the UNBC Timberwolves Wall of Honour in 2022.

A graduate of St. Francis High School in Calgary, Bartolillo had refined his game at the National Training Centre as a teenager, before deciding where he would continue his soccer journey at the university level. UNBC coach Alan Alderson was in his first season leading the program, and was aiming to build a roster of technically skilled athletes. He was connected to Bartolillo by Tofa Fakunle, who was then a freshman for the Timberwolves, and had been a youth teammate of the silky midfielder.

“Tofa had suggested Fran was a great player, a great person, and a “proper footballer,” and I was impressed by Fran’s maturity and desire to play a significant part in helping us build a program we would all be incredibly proud of. Needless to say, he did not disappoint, and he made a massive impact on our culture on and off the field, and set us up as a program that could compete against the best in the country.”

In his freshman season, Bartolillo didn’t take long to impact the Timberwolves, displaying poise and ball skills in the midfield, and starting all eleven games he appeared in. He scored a pair of goals, and was named UNBC Male Rookie of the Year, while earning his first U SPORTS Academic All-Canadian distinction.

According to Fakunle, even early in Bartolillo’s career, he was displaying the skills that would eventually set him apart from so many who donned the green and gold.

“He loved to create opportunities for others. He loved having the ball at his feet and he was so creative, he would try things that some may not even think to do. I really admired that about his game and wish I had some his instincts to try things. I remember asking him to come to Prince George, and I never thought he would. It was about building something.”

Prior to the 2015 season, Alderson departed and Steve Simonson was hired just weeks before the start of the schedule. The team’s record would fail to improve, however the new bench boss instilled a fresh playing style and team culture that proved to be a great mix with Bartolillo. He notched two more goals, starting all 12 games, and providing tremendous leadership to a program on the brink of a breakthrough. He would be named UNBC Male Athlete of the Year and earned his second U SPORTS Academic All-Canadian honour.

Off the pitch, Bartolillo also started to establish himself as a wonderful leader in the community, leading fundraising efforts and creating opportunities for all UNBC student-athletes to contribute to the Northern BC community. According to UNBC Athletic Director Loralyn Murdoch, the sophomore from Calgary was rounding into the ideal example of a student-athlete.

“Fran came to UNBC as a soccer player, but there was a side to him we didn’t know about. An amazing passion to lead his peers and to give back to the community. He would seek out UNBC staff and students, and he was relentless with his passion projects. He always stepped up to every challenge, and he was instrumental in bringing all the student-athletes from the four teams together. He was a voice for the students internally, and in the community.”

With a full year under his belt playing Simonson’s system, Bartolillo found another gear on the pitch in 2016. The TWolves set program highs in goals, wins, and points, with Bartolillo leading the way. Starting all 16 games, he had five goals, four assists, and nine points, cracking the Canada West top-ten in scoring, and earning the Golden Boot Award (with Fakunle), as well as the Coach’s Award for dedication.

At the UNBC year-end banquet, the Timberwolves bestowed the brand new KJM Sales Timberwolf Award on Bartolillo, an honour celebrating the student-athlete who excels most in athletics, academics, and in service to the community. According to Murdoch, choosing the recipient of the first KJM Award was a no-brainer.

“There was no question. He had gone above and beyond making a mark in the community. We were thrilled to create that award, and he was top of mind for the department. We want our student-athletes to get the most well-rounded experience they can, and Fran opened up pathways for that. For himself, but more importantly, for Timberwolf athletes then and now.”

In 2017, the TWolves had elevated themselves to a program not to be taken lightly at the Canada West level. The ever-analytical Bartolillo understood the roster makeup, and took on a more defensive role in the midfield, with an eye on cracking the conference playoffs. His numbers were not nearly as gaudy as a season prior, but the Timberwolves again set program records in goals, wins, and points, and qualified for the CW playoffs for the first time in program history.

It was a landmark moment for the program, and a signal that Bartolillo’s dedication to the growing program had paid off. He was named a U SPORT Academic All-Canadian for the fourth time and won his second consecutive KJM Sales Timberwolf Award at year’s end.

Owen Stewart was a second-year in 2017, and points to Bartolillo as a major factor in the team’s success.

“As a young guy in the program, Fran was always someone I looked to on the field or in the community. I looked up to him. He was always there to help with extra training sessions, and he was such a technical player that it really helped me learn. And, as good a player as Fran was, Prince George is so much better because of his work in the community.”

Leading into his senior season, Bartolillo was crucial in the creation of the Timberwolf Student Athlete Society; a non-profit organization for all UNBC student-athletes with a focus on philanthropy and creating opportunity. Essentially, he would lead a team of student-athletes as they worked to fundraise for causes within the community, giving back to the city and people that support the TWolves.

Events included the “Fill the Bus Bottle Drive” for a youth battling cancer in Prince George, sporting tournaments benefitting KidSport, events supporting Kordyban Lodge, events supporting special needs individuals in Northern BC, food drives for the less fortunate, and countless other efforts. According to Stewart, this may be Bartolillo’s lasting mark, all for a city that he arrived in as a university student.

“He was on a mission. He wanted to help this amazing community. He loves Prince George and what this place means to him. I have seen what Fran has accomplished, and I know it inspires so many people. As far as his legacy, I actually think it is his community work that will stand out. What an impact he made.”

Amanda Frost's young daughter Olivia was battling paediatric cancer at that time, and Bartolillo worked with TSAS and the Frosts to create fundraisers to benefit the then-six-year-old. Years later, and many TSAS fundraisers and events for others facing tough battles in the books, and Amanda holds a special place in her heart for the TWolves and the young man who spearheaded the efforts.

"The Frosts still fondly remember the kindness Francesco and the Timberwolves showed us in our time of greatest need. Thank you for stepping up when we really needed the support. The world needs more people like Francesco, with a heart of gold and a generous spirit."

Bartolillo’s senior season was memorable for a number of reasons. He started all 15 games, and set team records for goals with six, and points with 10, finishing top-ten in Canada West in goals, assists, and points. The Timberwolves also finished with the first winning season in program history, and Bartolillo made some history of his own.

On top of passing Fakunle for most goals in program history, he earned the Canada West Student-Athlete Community Service Award, before becoming the first Timberwolf to earn a major U SPORTS award, earning the National Student-Athlete Community Service Award. It should come as no surprise that he added a fifth Academic All-Canadian nod, the Golden Boot, the Coach’s Award, and a third consecutive KJM Sales Timberwolf Award.

Bartolillo concluded his career top-two in the program’s history in games, starts, goals, assists, points, shots, and game-winning goals. According to Simonson, you can’t tell the story of UNBC Soccer without Bartolillo.

“Fran has been so instrumental in the growth of this program. He was a fantastic player. He was a true leader. On and off the pitch. He was a gamechanger for us, and continues to be.”

After concluding his playing career, Bartolillo has, naturally, taken a spot on the Timberwolf sidelines, serving as an assistant coach. The TSAS lives on, continuing to raise money and awareness, and supporting the people of Northern BC. Just like Francesco Bartolillo intended.

“No one deserves this more than Francesco,” said Stewart. “He bleeds green and gold, and his passion for this school and this program will never die. He has done everything he can. He is the ideal Timberwolf.”