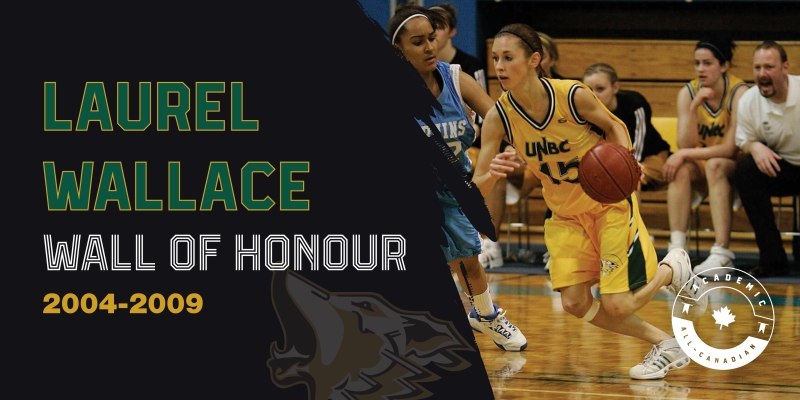 Every day, in every way, Laurel Wallace was relentless. At both ends of the court, she set a standard for the UNBC Women’s Basketball program, pushing the Timberwolves to new heights along the way. The fierce competitor concluded her career as one of the most decorated players in the program’s history, and is a fitting inductee into the UNBC Timberwolves Wall of Honour.

Following a successful high school career with Argyle Secondary, Wallace was recruited by UNBC coach Loralyn Murdoch, who loved her newest recruit’s combination of understated poise and intense commitment to getting better.

“Laurel was a quiet player on a really strong Argyle team, but she was unbelievable talented and incredibly bright academically. We worked hard on selling her on the basketball fit and the academic fit, and I was thrilled to get her to commit. We recruited Laurel and Jaclyn Nazareno at the same time; they had played against each other in high school, and together, they saw they could take our UNBC program to the next level.”

Wallace joined a TWolves roster full of veterans like Miranda Kenna, Lindsay Anderson, and Marlene Pontes. Her freshman season was focused on development, as the North Vancouver product came off the bench and injected her signature defense and timely scoring. The team went 12-6, and Wallace averaged 4.3 points, 2.8 rebounds, and 1.2 assists per game, earning the program’s Rookie of the Year award.

According to Nazareno, her fellow first-year was increasingly impactful as the season went along, setting the stage for a potentially historic career in green and gold.

“That team was pretty well established in our first year. It was about watching, learning, and taking opportunities that came to us when they did. In the second half of the season, more and more opportunities came to Laurel. I remember a game late in the season where was called on to take the big shot. It signalled the coaches’ confidence in the player Laurel was becoming and the role she was establishing.”

Many of the program’s departed prior to the 2005-2006 campaign, thrusting Wallace into a more significant role at both ends of the floor. The TWolves went 8-10, qualifying for the BCCAA playoffs, while she averaged 10.3 points, 4.4 boards, and 1.6 assists per game. On top of an uptick offensively, Wallace was often tasked with guarding the opposition’s best scorer, earning her UNBC Best Defensive Player honours.

According to Soili Smith, who was a freshman that season, it was Wallace’s kindness, commitment, and leadership that was truly beginning to establish her as a force to be reckoned with within the program.

“She wasn’t particularly talkative and never critical. She was just focused and supportive in an understated way. I think I made a backdoor cut and scored on her ONCE in practice, and she immediately and excitedly congratulated me. I grinned like an idiot the rest of the day about it. She was undeniably talented, and had the strongest work ethic on and off the court, combined with a genuinely kind disposition. She came first in every one-on-one challenge or fitness test, but she was incredibly humble. When you met her, you tend to think the universe is unfair – nobody should be that fiercely intelligent, athletic, or nice, and certainly not simultaneously.”

In year three, Wallace took another major leap, but it didn’t surprise anyone in the Timberwolves family. The first one in the gym, the last one to leave, and the student with her books open whenever she could, the long-limbed small forward averaged 14.8 points, 5.0 rebounds, and 2.3 assists per game, powering the Timberwolves to an 11-5 record. She was fifth in the BCCAA in scoring, while her rebounding and assist numbers were top-20 in the conference, and her incredibly work in the classroom earned her a CCAA National Academic All-Canadian nod. Wallace also was named a BCCAA First team All-Star, and won another UNBC Best Defensive Player award.

According to her head coach, Wallace had established herself as one of the most impactful players in the nation.

“Laurel never got tired. She was a workhorse who could run forever. She was truly relentless in practice. She could really shoot the ball and would shoot until her fingers bled. They would be raw and cracked and she would still be on the court on her own, shooting shots at game speed. Plus, she was a straight-A student, who studied with the same focus and intensity she practiced with. She was never the biggest player on the court, but she managed to make a big impact in every single game.”

The 2007-2008 season would prove to be a historic year for Wallace and the Timberwolves program. Playing home games in the brand new Northern Sport Centre, UNBC would host the BCCAA Provincial Championships – a title game they hoped to be playing in familiar territory.

Wallace was her usual well-rounded and dynamic self, averaging 12.8 points, 4.7 rebounds, and 2.3 helpers, while the TWolves went 11-5 and put themselves in position to challenge for the BC banner. When the opportunity to take on the Camosun Chargers for the championship arose, the fourth-year would not disappoint.

In a thrilling, historic 71-54 victory over Camosun, it was Wallace’s 23 points and two-way dominance that led the way for the Timberwolves.

“Laurel was, again, called upon to guard the toughest players, and yet she contributed offensively,” said Nazareno. “She never forced anything, never got too high or too low, and always was in control. Her contributions made her the easy choice for Most Valuable Player.”

“Early in the third quarter, Laurel was on fire. Camosun called a timeout and Loralyn looked around at us and said, “let’s put them away…end it,” said Smith, recalling the 22-4 third quarter that sealed the provincial banner for the TWolves. “I was standing next to Laurel, and she was nodding her head, but she looked possessed. I am serious, her eyes were enormous and her pupils seemed dilated? I just remember looking at her and thinking, oh my god, we are going to win. Sweet Laurel looked deadly, and I was suddenly certain we would win.”

For her encore, Wallace put a bow on a historic career by continuing to lead the way on and off the court for the Timberwolves. The epitome of a student-athlete, the fifth-year was crucial in a number of UNBC efforts to give back to the Northern BC community, while managing to set a gold standard academically.

Propelling the Timberwolves to a 14-4 campaign, she averaged 13.8 points, 3.3 rebounds, and 2.4 assists. Camosun got some revenge, topping UNBC in the BCCAA final, but it was Wallace leading the TWolves in scoring and being named a Provincial Tournament All-Star. She also earned BCCAA First Team All-Star status for the second time, and was named winner of the BCCAA Provincial Academic Excellence Award and a CCAA Academic All-Canadian.

One look at the record books and it is not difficult to see the impact Wallace had. She concluded her career top-ten all-time in BCCAA scoring with 952 points, a mark that was second-most in UNBC history. She also finished second in Timberwolves history in rebounding and fourth in assists.

Now living in Calgary, Wallace earned her PhD and works as Clinical Child Psychologist. She is married to fellow Timberwolf alum Raju Korotana, and has two children.

“You can’t discuss UNBC Timberwolves Women’s Basketball without Laurel Wallace’s name,” said Nazareno. “She played a pivotal role in establishing a culture that sets high expectations for the athletes in the classroom and on the court. She embodied excellence and set a standard. I am so proud to call Laurel a teammate and a friend.”

“How quietly and humbly Laurel succeeded still astonishes me. She was so poised. She never complained, it was never about her, she was team-first,” said Murdoch. “She truly was, the ultimate Timberwolf.”